Carrot Cake and the Lost Sock 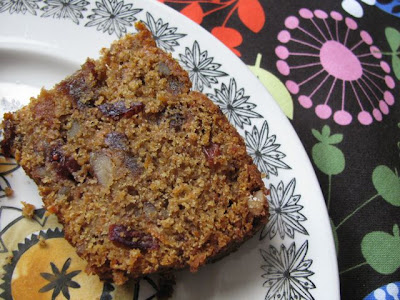 This morning Sylvia wasn’t sleeping and so I put on her floral hoodie and the hat with bear ears and we took a little trip in the car to the Botanic Gardens. I had particularly wanted to visit the gift shop which is one of the nicest around Melbourne tourist spots. I purchased a few things I needed (including a new pot holder you can see in the photos) and then we had a look at the café.

E and I had visited the café last year and been disappointed. I looked at it today and the food looked nice but the prices seemed a tad high. The carrot and orange cake looked impressive with loads of icing and nuts and fruit for decoration. But at $8 a slice, it seemed a lot to pay when I had carrot cake at home. I unwisely chose a cheap cookie which tasted like cardboard. 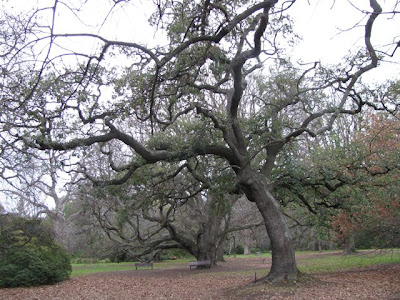 Never mind, I thought Sylvia and I could have a walk in the gardens. We started out for the herb garden because I had noticed it had samphire there. The naked branches of the winter trees looked spectacularly spooky. But it was windy and I worried about Sylvia being cold. Then I noticed one of her socks had disappeared. They were both there when we got out of the car because I remember checking. So we retraced our footsteps but never found the missing sock. 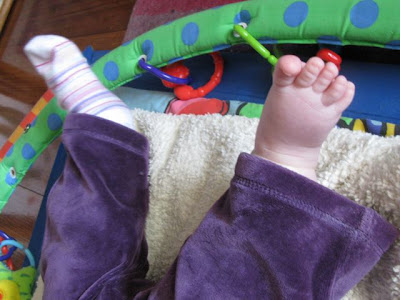 By then, her little foot was cold and the idea of a walk was no longer so appealing. But I felt quite good as I headed back to the car. I remembered that there was homemade soup waiting for me at home as well as the carrot cake I baked yesterday. 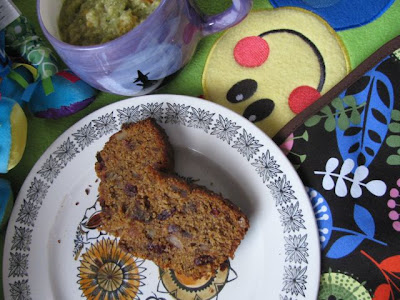 I baked the cake because I had a lot of carrots and it has been a long time between carrot cakes. This was one of the standard cakes we used to have when I was young. Carrot cakes were also ubiquitous in cafes in the 1990s when they were served with lashings of cream cheese frosting. They typically are made with lots of nuts and dried fruit and oil rather than butter.

While my cake had butter and no frosting, it was chock-full of walnuts and raisins. I didn’t have any raisins but I had some cranberries and dates. I forgot to add the vanilla. The recipe called for white sugar which I used but then thought brown sugar would be nice so I added a bit of treacle. I decided this was a good opportunity to use up my spelt flour. There wasn’t quite enough so I used a little soy flour to keep it wheat-free but a plain or wholemeal wheat flour would be fine in this recipe. 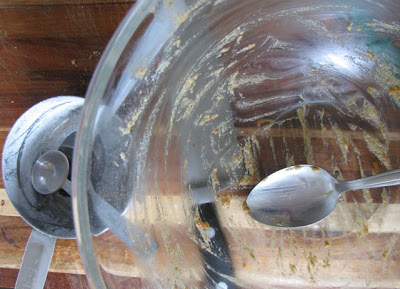 This is a cake that is superb eaten hot out of the oven. It is every bit as moist and soft as you would want with the added flavour and texture from nuts and dried fruit. E got home and was disappointed there was no icing. I showed him the picture in the cookbook with carrot cakes topped with cream cheese frosting and the recipe I used which had no icing. He told me the cake was quite rich for him. When I offered it to him tonight, he said that he liked that sort of cake in the afternoon with a cup of tea but not at night. There’s nowt so queer as folk!!!

I loved the recipe and, although there are many carrot cakes I would love to make, this one is a good everyday one that I want to make over and over. Much more satisfying than I suspect the botanic gardens one would have been. So the moral of the story today is that the gift shop at the Botanic Gardens is well worth a visit but you might as well give the café a miss and bake your own carrot cake (and hold onto your socks in this wind)! 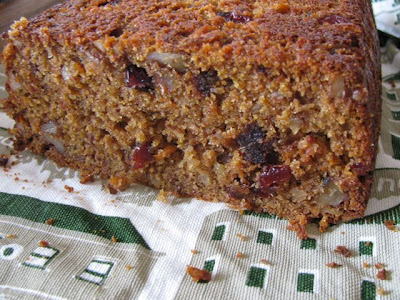 Cream butter and sugar. Add golden syrup, treacle and eggs one at a time, beating after each addition. Stir in carrot, cranberries, dates and walnuts. It will look curdled but this will be fixed once flour is added. Gently stir in flours, baking powder and spices till just combined. Spoon into greased and lined loaf tin (13 x 25cm) and bake in moderate oven (180 C) for 1¼ hours. Check it after ¾ hour – I found by then that my cake was quite brown on top and needed to be covered. I reduced the heat to 150 C and put my cake on the bottom rung of the oven after an hour. It is done when a skewer comes out cleanly. Sit in tin 5 minutes and then cool on a wire rack.

On the stereo:
iselectBowie (The Sunday Mail Freebie) – David Bowie
Posted by Johanna GGG at 22:07