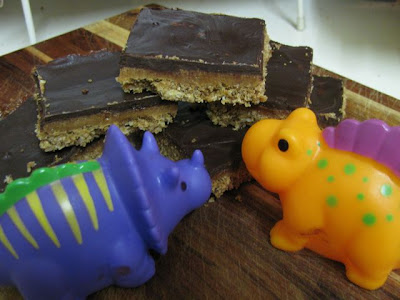 ‘When can we eat the slice?’ asked E. ‘If you are impatient like me, you can have a piece now with melty chocolate’, I replied. He didn't need much encouragement. So we both had a few pieces of warm melty chocolate caramel slice. My excuse (other than impatience) was that I thought the chocolate would never set. In fact I had problems with every layer but the recipe was a success. 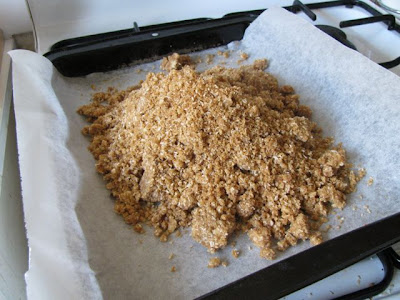 Chocolate caramel slice is a delectable slice that most Australian children grow up eating. Well that is what I believed when I was little. It was everywhere. Local bakeries sold it, there were always plates of the stuff at cake sales and church afternoon teas, and, of course, my mum would sometimes make us a batch. 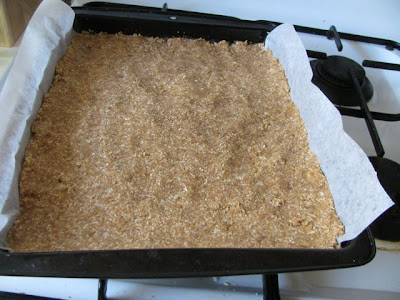 It is made of three distinct layers – biscuit, caramel and chocolate. E loves it. For him it ticks all the food groups. When I met him in the UK, I noticed he loved a similar slice that was called millionaire’s shortbread. It wasn’t till I returned to Australia that I realised why it never tasted quite right to me. The slice that I grew up with had a dense coconutty biscuit base. Whereas the millionaire’s shortbread has a light buttery shortbread base. I have made the British version from How to Be a Domestic Goddess a few years ago but have been meaning to make its Aussie cousin for some time. I knew it would delight E and bring back memories for me. 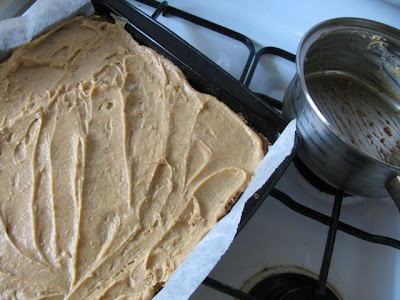 I had a recipe in the Australian Women’s Weekly Old Fashioned Favourites. I have had mixed success with this book. So when the biscuit base was a pile of crumbs that promised to fall apart at the slightest touch, I began to worry. But they pressed down into a solid base. Then I was further concerned when the caramel base was thin and dark. Had I cooked it on the stovetop or in the oven too long? By now I was ready to throw it in the bin and curse the cookbook. I started to look at other recipes on the web and think less cooking time or more butter in the caramel might have helped. I even checked Nigella’s recipe and found she didn’t cook her caramel nearly as much. So in devil-may-care mode I used really good dark chocolate and too much oil. The chocolate mixture was so liquid it seemed destined not to set. It was tempting to just eat it without even giving it a chance to harden. But I thought I should put it in the fridge and see how it went. To my amazement the chocolate set. 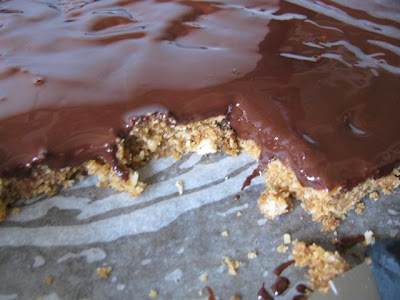 Anyone who reads this blog regularly will have seen that I don’t like my slices in the fridge. I prefer them room temperature. So the chocolate might have chipped when I tried to cut a piece straight out of the fridge, but once it had sat at room temperature for an hour or so, it was delicious. I had thought I might reduce the sugar in the base and maybe try a more buttery, less cooked caramel but once I tasted it I was beginning to wonder if it needed any changes. After all who can resist a slice full of chocolate and caramelised condensed milk!

E repeatedly told me how much he loved it. I gave him some to take to work, which he has been enjoying. But this is something he can eat any time of day. So can I. It was quite different from the large slabs you find in many cafes and bakeries in Melbourne. This slice was eaten in small flat pieces with just a thin layer of chewy caramel on top of the ever-so-slightly crumbly biscuit base, covered with rich dark chocolate. It was intense and decadent but it tasted so good that it was hard to have only one piece. 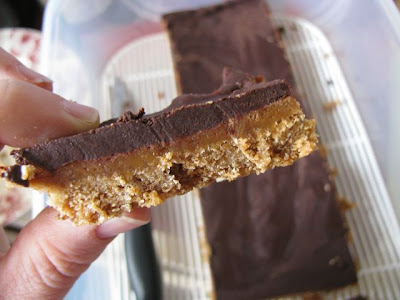 While base is baking, make the caramel filling. Place all ingredients in a small saucepan and stir constantly over low to medium heat for about 15 minutes till it is thickened and looks light golden brown. (I did mine for a bit less than 15 minutes and found that it needed to be on a low heat despite the recipe saying medium heat.) Spread onto cooked base while both are still warm. Bake 10-12 minutes til a deep golden brown. Cool. (I think this took an hour or two.)

(Kitchen Hint: to clean the saucepan in which you cook the caramel, fill it with cold water and bring to the boil. This will help to lift the caramel.)

Melt chocolate (I did mine in the microwave but you could also do it on a double boiler) and then mix in the oil. Spread it over the caramel layer. Put it in the fridge to set (about 3 hours). Then bring to room temperature and cut into squares or bars.

Update October 2011: this can be made with orgran gf flour and soy condensed milk - see photo of my gluten free vegan version.

Update April 2015: I made it gluten free by omitting wheat flours and instead adding 6 tbsp besan four, 4 tbsp tapioca, 4 tbsp potato starch, 2 tbsp sorghum flour, 1 tsp baking powder and 1/2 tsp xanthum gum.  I thought the base was overbaked (I baked it 20 minutes) as it seemed very crisp the day of baking but the next day it was lovely and chewy.

On the stereo:
Black ships eat the sky: Current 93
Posted by Johanna GGG at 22:07