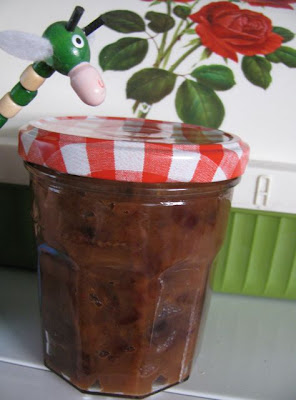 On the weekend I whipped up a chutney while watching tv and feeding Sylvia. It burnt a little but was not so badly that I couldn’t rescue it. It seemed quite easy. Then a wonderful thought occurred. I think I have overcome my chutney fear.

There are all sorts of fears in the kitchen. I am not talking about the fear as your favourite plate teeters on the edge of the benchtop and threatens to shatter into pieces nor the fear as a knife falls perilously close to your toes. Rather it is the fear of difficult recipes. Those that challenge us to go outside our comfort zone. I used to fear risotto but thankfully got over that one. I still fear lots of things: jams and pastry and my cookie press. But there is still time for change. They say that familiarity breeds contempt but it also gives a certain reassurance

Yesterday I read an insightful essay by Michael Pollan called Out of the Kitchen, Onto the Couch (thanks to Kathryn’s quicklinks). He talked about the USA becoming a nation of armchair cooks who would prefer to watch cooking on the telly than do any in the kitchen. Television, he argues, ‘has succeeded in turning cooking into a spectator sport.’ He suggests that cooking might become a weekend recreational activity rather than an everyday necessity. 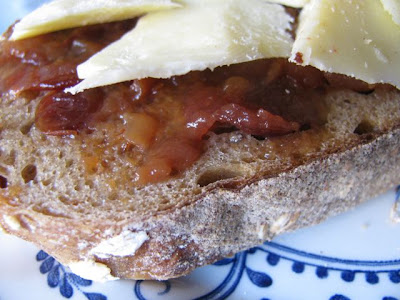 The bad guys, as usual, are the corporations who are trying to persuade Americans to let them do the cooking for them. For a price! Cookery shows are about selling products rather than encouraging cooking. (When I watched Masterchef recently, I wondered how many people would run out to buy the sausage making machines the contestants used, only to have it sit in the cupboard gathering dust.)

The good guys are those who dare. Not today’s celebrity chefs who fly through a recipe with the greatest of ease and then dare the viewer to be able to master it based on that demonstration. No, the hero of the essay is Julia Child (who is not a household name in Australia). She took the fear out of the cooking for housewives of the 1960s. He has a lovely description of how she showed the ‘courage to flip’ a potato pancake despite it failing (falling) miserably. I loved it how she told housewives, ‘if you’re alone in the kitchen who is going to see’.

Anyone who knows how to cook knows the value of practicing a recipe until you are comfortable with it. I learnt this from watching my mum. I know it from my own experience. There are dishes I cook over and over – cakes, soups, cookies, salads, pastas, risottos etc. I often make different ones but follow the same methods, and go back to favourite flavour combinations. 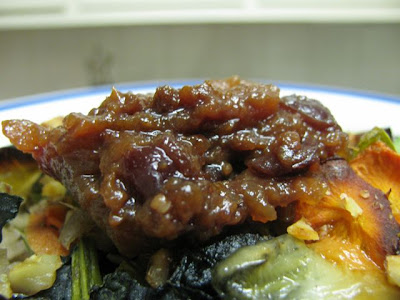 So last year when Rosie and Pixie held their Putting Up event I wanted to participate but was nervous about making any sort of preserves. When it came to preserving, I immediately thought of jam. My mum makes lovely jam – in fact she gave me some of her own marmalade this week – and I would love to follow her example. Scones and homemade jam seem essential accomplishments for any domestic goddess. But I wasn’t quite ready for such dizzy heights of achievement. Instead I tried Rhubarb Relish. I made a small amount so I didn’t have to confront the dreaded task of sterilising jars.

My desire to make jam was somewhat satiated earlier this year when I made peach and pineapple jam. However, there is still a jar of the stuff in the pantry because I don’t eat jam that much and when I do, I love the St Dalfours jam which is pleasingly tart. But the chutney I made last night was the fifth chutney I have made this year. Each one has been eaten as though there is no tomorrow. I love them with cheese on toast, with vegie sausages, with a burger or nutroast. I have realised that it is far better to put my energies into chutney than jam.

What scared me most was sterilising the jars. But even that doesn’t seem as frightening any more. Last night I gave Sylvia to E and quickly boiled some water to pour over a couple of jars and filled them up (using tongs to avoid burning my paws). I sometimes boil them 10 minutes but not if time is scarce. I haven’t kept any chutney for months and months but this method seems fine for my needs. (I probably should heed Nigella’s advice that chutney is best after a month but I am too impatient.)

The practice is helping, and so is the blog. I find it helpful to go back to chutneys I have previously made to check what spices I liked and what quantities. It has even helped reduce the nerves about sterilising. Going back over how I did it last time has given me more confidence. 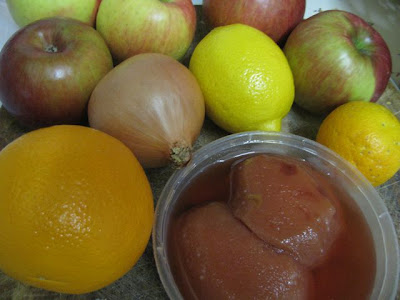 My most recent chutney goes by the charming name of Paradise Chutney. My list of thanks reads like a Oscars acceptance speech. Firstly I wish to thanks Lysy who recently mentioned that Nigella had many quince recipes. As soon as I saw this I checked How to Be a Domestic Goddess for ideas, given that I had quinces in four guises in the house (more about these later).

I found the Paradise Chutney recipe which used apples, quince, cranberries, oranges and lemons. The apples came from the tree of friends of my brother Dave. My mum brought e a generous bag of them and I didn’t fancy eating them because the skins were quite tough – although they were quite nice peeled. Nigella called for raw quince which is to be cooked as part of the process. My mum had brought some of her poached quinces that had been in the fridge long enough and needed to be used. The oranges came from E’s work colleague. The lemons, sad to say, were from the supermarket but were just filling the gap between the lemons from our tree and the lemons from my sister Fran’s partner’s parents’ tree.

So this chutney seems like a gift from many people. The smell of cooking quinces is so evocative for me because my mum makes quince jelly regularly. I love putting in lots of lovely spices and was inspired by the Moosewood Cookbook which I was pleased to discover had an apple chutney recipe. The other fruit in Nigella’s Paradise Chutney was fresh and dried cranberries. Fresh cranberries are as rare as hen’s teeth in these parts but I used a generous amount of dried cranberries. The chutney was fantastic - sweet and spicy and fragrant with quinces. I've been loving it with cheese on sourdough bread, with a pasta bake and a cheesy tart. 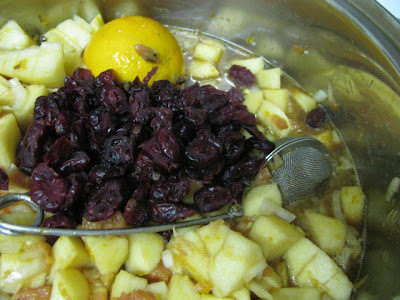 As you can see, I made quite a few changes to the recipe. And this is where I discovered I am over my chutney fear. I was pleased to be able to adapt the chutney to what I had in the house. This is the joy of chutney. It is not about rushing out to buy every ingredient to follow a recipe to the letter. Rather, it is about preserving what is about the kitchen and making a recipe work for you. I now can’t wait for summer to make more chutneys.

I am sending this post to MomGateway for Grow Your Own Event, a blogging event founded by Andrea of Andrea’s Recipes for recipes made with produce from bloggers gardens or gifted to them from others gardens.

Stick the cloves into a small orange or a piece of rind. If cinnamon sticks are flaky, place in muslin bag or a tea infuser. Place with all ingredients in large saucepan and bring to the boil. Cover and simmer for 30-60 minutes, stirring frequently. The chutney is ready when most of the liquid is gone and the apples are soft. Remove cloves and cinnamon stick and discard. Bottle chutney while still warm.

On the stereo:
Little Earthquakes: Tori Amos
Posted by Johanna GGG at 19:38