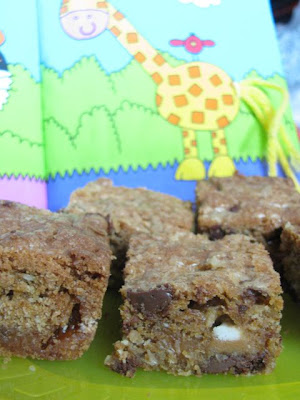 Most days I fall into bed at night after putting Sylvia down to sleep and my mind is blank when I wonder what I did all day. So I felt quite pleased yesterday with my list of activities. Not the most impressive list, but it is a list that shows progress with Sylvia. I was too busy to do much blogging but I did manage to bake some luscious blondies and produce a superb soup for No Croutons Required.

So what did I do yesterday? I did the housework that has increased exponentially since Sylvia arrived: a load of laundry and the vacuuming. I rang the travel agent. I moved bits and pieces of an old computer to the car in preparation for taking it to a computer recycling place (byteback) on the weekend. I went to the doctors. I paid the electricity bill. I took the car to the garage that could take out Sylvia’s baby capsule and fit a new baby seat. I made dip, blondies and soup. 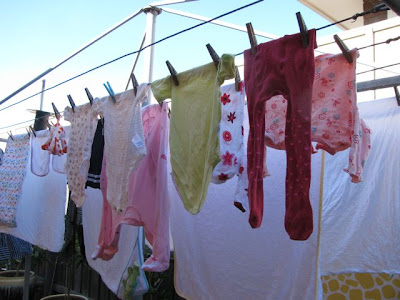 At about 8pm I sat down to dinner and felt I had hardly stopped all day. It isn’t such a long list but this is a lot to fit in between feeding, playing, settling. So many days I am about to do something and suddenly the wail goes up from the cot – which is not good when I am about to step into the shower. Everything takes longer with a baby. A walk to the shops is a major event. Making dinner is often punctuated by crying. Plus there is our cat who comes to the door at the most inopportune moments. After dinner I realised I hadn’t worn a cardigan all day. It wasn’t that cold but I had meant to put one on a few times and then got distracted.

I am not complaining. I know I am lucky to have time at home with Sylvia. I am just pleased when I get my act together, when the sun shines on my washing and when dinner is made and I can sit down and enjoy it.

All three recipes of the day came from Ashley at Eat Me Delicious. I am sure that shows how inspiring her blog is. One of the recipes was a Spinach and Artichoke dip, which needs work before I blog it. It didn’t look like hers and I fear that I had too much moisture and not enough artichoke. But the blondies were great. They were as chewy and chunky as the name suggested. 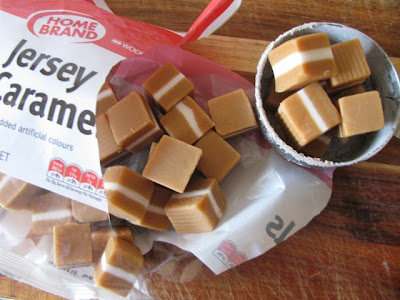 I have never made blondies before. In fact I have always wondered why anyone would bother to make brownies with white rather than dark chocolate. When I grew up I knew there was a band called Blondie and a comic strip called Blondie. I named one of my dolls Kathleen Blondie (to distinguish her from Kathleen Blackie). But I had never heard of eating blondies till I was an adult.

Lately I have been intrigued. Maybe it is because I am going through a brownie phase (have you noticed?). I had a look on the web for more information about blondies and found a tempting Australian recipe for White Chocolate Macadamia and Raspberry Blondies which told me that blondies have white chocolate in them, just as I thought. However, it seems this is not always the case in America. Smitten Kitten has a blondie recipe with just butter, sugar, egg, flour, salt and vanilla. This made sense when I found an entry on blondies on Vanilla Garlic that says their rich flavour comes from the molasses in brown sugar. This claim is also made by Rosa’s Yummy Yums, which says they are also known as butterscotch brownies or blonde brownies. 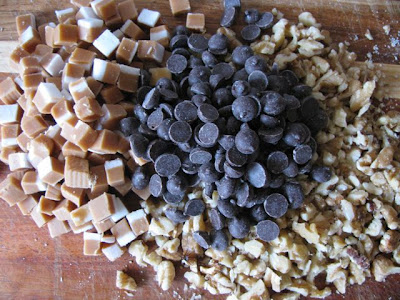 It is the butterscotch aspect that interested me (after reading the blondies recipe in Ricki’s Sweet Freedom Cookbook) I was further encouraged by Ashley whose blondie recipe, from Dorie Greenspan’s Baking From My Home to Your, had butterscotch chips or toffee pieces. Now I have mentioned that E has been requesting butterscotch lately. Unfortunately we don’t have butterscotch chips in Australia. Toffee pieces, however, seemed something I could do. I had recently seen a friend bake with jersey caramels so I decided I could impress E by putting these in the recipe.

E was most pleased with the blondies. He even said they were a wee bit butterscotch and when I asked if he wanted me to put some in his bag for work, he was quite definite that he wanted a piece. He also was quite happy to nibble on the leftover jersey caramels. 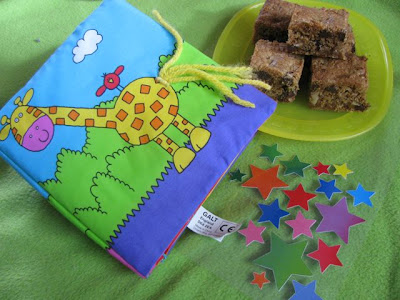 I used half wholemeal flour instead of all white and some dark brown sugar instead of light. The mixture was quite stiff and when I was smoothing it down in the cake tin, Sylvia was grizzly so I ended up spreading it with her in one arm. So it wasn’t really that hard. I accidentally had the oven slightly hot and wondered if this was why the top was slightly crumbly. But it was pleasingly chewy inside with lots of flavours and textures. Those Jersey caramels are good by themselves or in baked goods.

I then waited till E got home to make soup for dinner. Again, it was inspired by Ashley. She has been doing Leng’s Salad Challenge and posting some interesting salads. One salad that took my fancy had taco seasoned roasted chickpeas scattered over it. Yum! I wanted to try it but, despite some sunshine, it is not salad weather. So I thought I could use them instead of croutons in a soup. Then I thought if I was roasting chickpeas, I might as well roast some vegetables as well. I saw her taco chips accompanying her Portobello Salad with Mustard Dressing and remembered I still had tacos leftover from making my Mexican Rice Soup. Suddenly I knew what soup I was making. 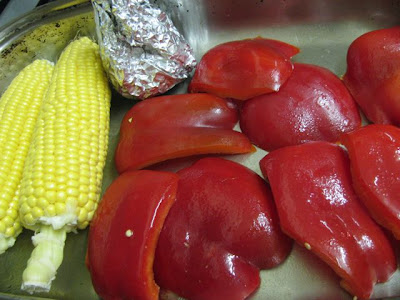 It took me an hour and a half to make, so I wont make any claims on it being quick. But it was absolutely delicious. Superb, said E. The spices and intense roasted vegetables melded wonderfully. I thought it might be a bit watery but it was so thick it was like a stew. The chickpeas were great. I don’t have onion and garlic powder but I think the chickpeas would make a great snack with just a little fresh crushed garlic. They also made a nice garnish for the soup. 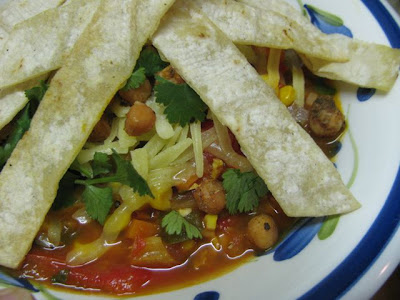 I was inspired to include red capsicum, green capsicum and a jalapeno chilli pepper by Jacqueline who is hosting this month's No Croutons Required Event, which she and Lisa organise each month for bloggers to make vegetarian soups or salads. The theme in August is peppers. I had to think hard about this. The only pepper I grew up with is a dried one I now know as white pepper. It was the antichrist of flavourings among me and my siblings. If one of us put it on our dinner instead of salt by mistake there would be tears and my mother would gallantly swap dinners with us. 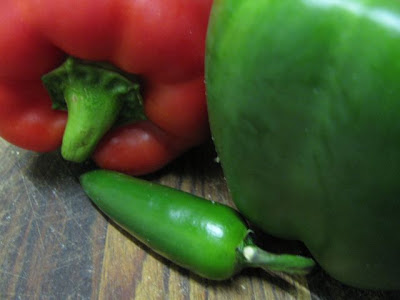 It shows how far I have come that I managed to make this soup with black pepper, cayenne pepper, green and red capsicums and jalapenos. We might not use the word pepper as much as our British and American friends. Their red and green peppers or bell peppers are our capsicums. Their chili peppers are just chillis here. But we love them just the same. I was pleased to see red capsicums on sale. Their sweet roasted flavor was prominent in the soup, so I am sure Jacqueline will be happy to accept the soup for this event.

Lop top off garlic bulb and place on a square of foil, drizzle with a little oil (about ½ tablespoon) and bring foil up to twist ends at top to make little foil bag. Place corn, red capsicums, and garlic in roasting tray. Spray corn and capsicum with oil. Roast at 220 C for 55 min or till roasted. (NB: I roasted capsicums till skin wrinkled but not charred.)

Place pumpkin in small roasting tray with 1 tablespoon of oil and seasoning. Roast for 1 hour at 220 C (on the bottom shelf for 45 minutes and then moved up to top shelf).

Mix taco seasoning together. Toss through with chickpeas in a small roasting tray. My chickpeas still had a bit of water over them from rinsing but if you have drained yours very well you might need to add a tablespoon of water. Roast in oven at 220 C on the bottom tray for 20-25 minutes. The chickpeas will be soft but dried out a little around the edges and be coated by the seasoning.

While soup is simmering the roasted vegetables should be about ready (if you take as long as I did with chopping vegetables). It is easiest to handle if you can have trays sitting out for 5 or 10 minutes before chopping. Squeeze garlic cloves out of skins and finely chop. Chop corn kernels off the cob. Chop red capsicum (I didn’t take skins off).

Meanwhile I put strips of tortilla in tray in which I roasted pumpkin because there was still plenty of oil. I tossed tortilla in this oil and roasted for 5 – 10 minutes til starting to brown but still soft.

Chewy, Chunky Blondies
adapted from Baking: From My Home to Yours via Eat Me Delicious

Cream butter and sugars. I did this by hand but it was quite stiff so might do it with electric beaters next time. Add eggs one at a time and vanilla, beating after each addition. Add flour, baking powder and bicarb soda and either mix on low speed on electric beaters or by hand. Stir in choc chips, toffee bits, walnuts and coconut.

Scrape the batter into the prepared tin and smooth as best you can (it smoothes out when it cooks so doesn’t have to be perfect). Bake for 40 minutes or until the top is honey brown and a skewer in the centre comes out clean. Cool in pan. When cool cut into squares or bars.