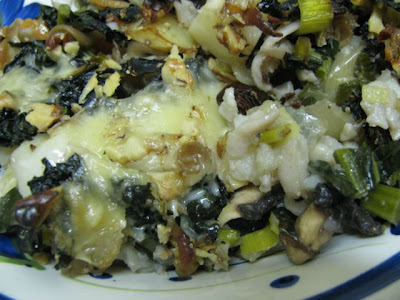 I was on the phone to my 4 year old niece who is celiac and thus eats only a gluten free diet. She asked what I was having for dinner. Gluten free pasta with potato and cabbage. Yuk! So I asked what she was having. Fish and chips, she told me gleefully, they’re my favourites.Fortunately it was easier to sell this to E. I just told him it was a little bit neofolk. What with dark cavolo nero (black kale) and Eastern European buckwheat and caraway, it is not difficult to imagine it as part of a neofolk banquet in a gloomy medieval dining hall. 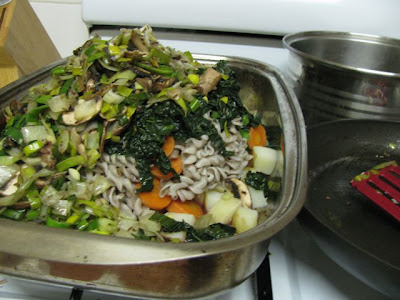 I found the recipe last year at a B&B while on holiday in Philip Island. I love browsing recipes anywhere and delight in unusual and interesting combinations of flavours. This pasta bake was something I never would have thought of but makes so much sense. I remembered it when I discovered the O’Hea Street Bakery and Deli sold fontina cheese.I tried a gluten free pasta for the first time last year when I had mung bean pasta with broad bean pesto. I was not impressed. The more I try gluten free recipes I have found that it is not always a matter of substituting gluten free flour or pasta for the wheaten version. Sometimes it works but not always. I have been enjoying buckwheat flour lately and was not surprised to find the pasta bake most pleasing, although maybe it is just that I tried it in the right way.The recipe did seem light on seasoning but it was very tasty. Salting the pasta water and potato water seemed to help. Next time I think I might try some smoked paprika in it, and if I would love more cheese and walnuts – but that will depend if I am needing more protein or less fat in my diet. The other caution I will give you is that it needs a large baking dish. I used my large roasting dish and mixed it in the dish to avoid despairing over my lack of a monster-sized mixing bowl. 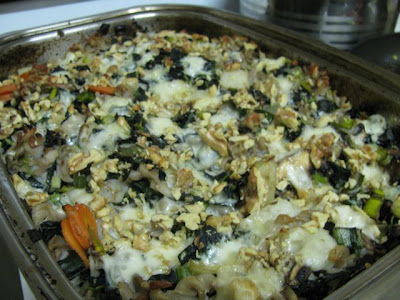 The joy of this recipe is that it will feed a crowd or feed a small household for a few days. And that is good thing! Especially in windy wet weather such as we are having today. But fear not, the news might be telling Melbournians to bunker down with fierce rain and wild winds expected (telling people to leave work early), but we have split pea soup for dinner and I am planning to bake more of those bush bickies.I am sending this to Helen of Fuss Free Flavours who is hosting this week's Presto Pasta Night (#128), an event founded by Ruth of Once Upon a Feast.Rustic Buckwheat Pasta Bake with Fontina Cheese
Adapted from Vegetarian by Nicola Graimes
Serves 6

Cook potato in salted water for about 15-20 minutes or until potato soft. Cook pasta in boiling salted water according to packet directions. Add kale to cooking pasta for the last few minutes. Drain.In a large frypan, heat oil and fry onion, carrot and leeks for about 5 minutes. Add garlic and mushrooms for 3 minutes and then cumin and caraway for 1 minute. Place everything, except cheese and walnuts, into large baking tray and mix well. Check seasoning. Sprinkle cheese and walnuts over the top. Bake for 30 minutes at 200 C or until cheese is melted.On the stereo:
Thursday’s Fortune: Club Hoy