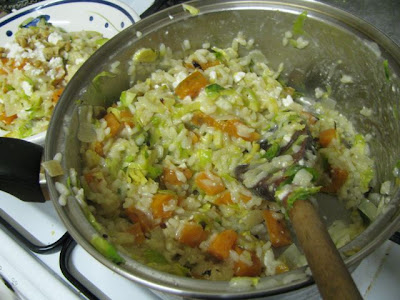 We eat Brussels Sprouts quite often in our house. E even encouraged me to serve a dish with them the other day and I commented on how he had changed since I met him. Back then, it was a family tradition for him and his dad to complain about the sprouts each Christmas. But he explained that he never had sprouts cooked like I do them. I microwave them so they are still a lovely green or roast them to bring out their lovely flavour. 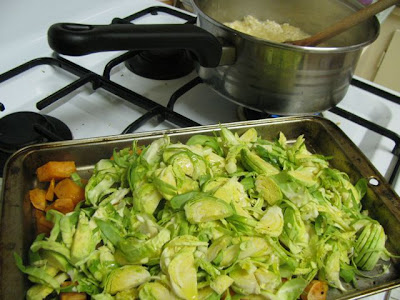 Sprouts converts as we are, neither of us had ever had sprouts in a risotto until recently. I was making a feta and sweet potato risotto that was inspired by finding the term entered as a search item in my stats. Great combination, I thought, I might just try it. When I came to trying it, I planned to serve it with sprouts on the side. But then I thought, why not add them into the mix. And so I did. 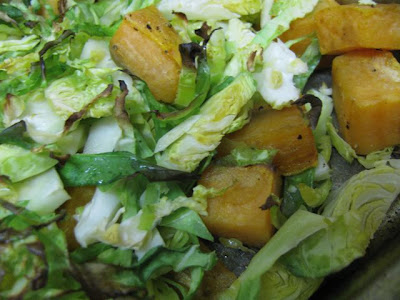 A bold move, indeed, but one that paid dividends. I think they were better on the first night but still quite tasty with the leftovers the next night. This was a delicious risotto with lots of unusual flavours and textures. E particularly liked the walnuts. I was most impressed with the sprouts. I always like new ideas for getting green vegetables into my dinner so I will be trying this one again. 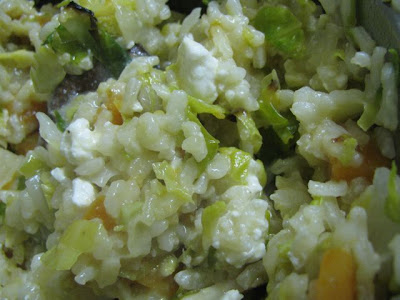 Heat oil and butter in large saucepan. Fry onion for about 5 minutes till soft but not browned. Add garlic and rice and stir for about 3 minutes. Pour in white wine and stir frequently till almost absorbed.

Meanwhile boil kettle. Add half a cup of boiling water and stock powder, keeping the mixture simmering (on about medium heat but fiddle with heat to keep at even simmer) and stirring frequently. Once most of the liquid is absorbed. Repeat with half cups of boiling water until rice is soft. This should take about 20-25 minutes.

When rice is soft, add lemon juice, sweet potato, sprouts and feta. Stir til combined and heat for a few minutes if roast veg have cooled. Serve with chopped nuts on top.

On the stereo:
Sylvia Suite from the Best of French Ballet by Delibes
Posted by Johanna GGG at 19:31