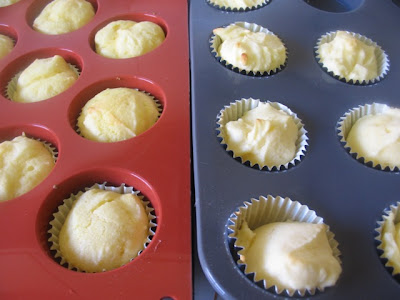 Yesterday – Saturday morning I was up early for the beginning of a busy baking weekend, and thought it would be easy to whip up a quick batch of cupcakes before breakfast. The recipe looked easy enough to do in my sleep which is my usual state before breakfast. I don’t usually bake before breakfast but it was my crazy way of trying to make it seem quick and effortless because breakfast is one of the earliest things I do in the day.

There was some method in my madness. I wanted to test a new mini-muffin pan, but more importantly to try out substituting a new branch of gluten free flour I had bought the previous week. My sister and I were holding a gluten free morning tea the next day and I wanted to check this flour could be substituted easily.

When my niece Grace was originally tested positive as celiac, I bought some freedom foods gluten free flour mix which had the squeaky consistency of cornflour and when I substituted it for wheat flour it was sorely disappointing. But my mum had been having great luck with substituting her flour so I decided it was time to try a different brand. I bought Casalare at the health food store and wanted to test it on my cupcakes.

After putting mixture into new mini-muffins pan I realised I had forgotten to add the bicarbonate soda – you might call it a mistake or an accidental experiment. I once put a cake in the oven and remembered I had forgot to add the sugar – when I tipped mixture back into a mixing bowl and added sugar, I was amazed at how the texture changed into a more gooey mixture.

Luckily yesterday I had another batch to put in the oven and was fascinated to see the difference that bicarb soda makes. The first batch didn’t change shape or texture as much or 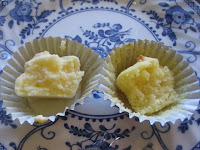 turn golden. Whereas the second batch were a lot more cake-like. The texture had a proper crumb and they rounded out as they rose and went golden brown.

I hope not to do this again but am sort of glad I did as it was interesting. It has made me realize that even a tiny bit of bicarb soda does a lot more than make cakes rise. (Oh, and the Casalare gluten free flour was much better)

Preheat oven to 180 C. The recipe says to use electric beaters but I just used a metal spoon. Beat butter and sugar til creamy. Then add egg and beat well. Add remaining ingredients. Spoon into mini-muffin moulds and bake 10 minutes (it says 6-8 minutes in the recipe). Cool on a wire rack.