Lentil as Anything: saloon without a spoon 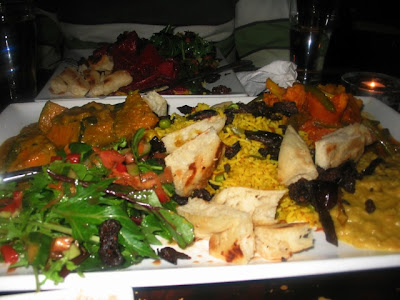 Last night I went to Lentil as Anything in Brunswick with E and Will. It’s a vegetarian café on my way home and has an interesting philosophy of no fixed prices which always makes visits there interesting when it comes to paying the bill.

It is run by Shanaka Fernando who won the 2007 Australian of the Year award as a social challenger. He describes the restaurant as a not-for-profit incorporated organisation that celebrates ‘compassion, individuality and artistic expression’ and ‘challenges and defies our money driven consumerist society'. Check out the lentil as anything website at the end of this post for more information.

It always feels like a welcoming place, a tad eccentric with a raggle taggle bunch of staff who can be seen working away through a little window. It is actually located in a bar called the Spot which is dimly lit and decorated with swirly orange lines and lampshades reminiscent of the Groovy Guru (for Get Smart fans). I have also been the Abbotsford Convent one which is in the beautiful old convent building and has grounds to walk off lunch or to run about with kids.

But when we went there last night there were changes. Lentil as Anything is now vegan. And my favourite roti bread was off the menu. I asked what happened to the roti and our waitress told us that the roti was actually fried puff pastry and they made a decision to buy Turkish bread from a local bakery. That makes sense, as they are in a street renown for the middle eastern shops and cafes.

For the main E and I chose the curry platter for two, and Will decided to try the Sri Lankan Beetroot Curry. The curry platter comes on a huge rectangular plate and we asked for a spoon to serve it on to our individual plates. The waitress said they had no spoons. When I pressed her into even bringing out a dessert spoon she said the kitchen had no spoons. E was very inconvenienced at having to serve with a fork. I was gobsmacked that any kitchen can not have spoons. Inconceivable!

So we scooped up our curries as best we could. One of the great things about the curry platter is that there is such a great variety of curries. I hate being in an Indian restaurant and having to choose either a curry with only one or two vegetables. One our platter we had dahl, a tomato, green bean and cauliflower curry, pumpkin curry, green salad, eggplant masala, and a pilau rice with peas. Plus Turkish bread. A veritable feast.

When helping mop up some of our curry, Will commented that the pumpkin curry had peanuts in it. If I’d had a spoon I might have been able to scoop up so sauce rather than just the large chunks of pumpkin (which I think weren’t cooked enough to justify leaving the skin on but they get away with it). I also don’t think green salad seems right with a curry. But I love the eggplant masala. It is small chunks of eggplant fried or roasted til they become dark chewy spicy morsels. The Turkish bread was good but I missed the roti to mop up the curries. And they curries left a pleasant spicy heat in my mouth.

The other change which was slightly confronting was the disappearance of the honesty box. On previous visits, there has been a box where you put the money you think your meal was worth. Last night we were given a plate to put the money in on the table. Is this a way of shaming those who abuse the system? I don’t know but it felt a little less friendly but they are nice people so we put our money on the plate. No fixed prices is a strange system. It means that there is no guide as to meal sizes and that at the end of the meal there is the discussion about prices. I wont tell you what we paid but I think it was fair. But we speculated on bringing a handful of spoons next time instead of money – I think they need them more than cash.

Of course, a lack of dessert spoons had warned us not to expect dessert. Will was not keen on soy cappuccino. I was full up but happy to wander off down Sydney Road in search of sweet treats.

Update 2009 - Lentil as Anything in Brunswick closed last year - seems people want a spoon with their dinner - but you can still find it at the Abbotsford Convent and possibly other spots in Melbourne. Check the Lentil as Anything website.