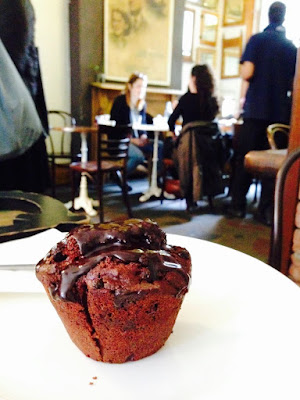 A café called Green with a distressed green wall and a big distressed green table and wonderful swirly green patterns on the wall. Plus lots of wood and lots of cake that remind me of childhood treats. What’s not to like?


Enter the Green Refectory Café and you will see plates of lemon slice and hedgehog. Along the top of the counter are more plates of cake – orange poppy seed and lemon yoghurt. Then at the end of the counter is a display cabinet full of cake: passionfruit sponge, jelly cakes, strawberry sponge, vanilla slices, carrot cake, and three cheesecakes. This is a place that is serious about its cakes. 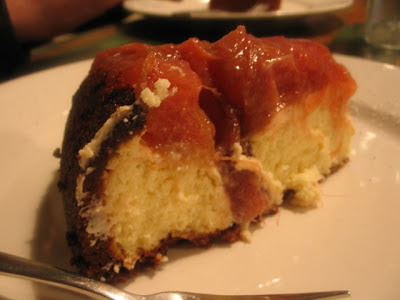 I had my heart set on the rhubarb cheesecake and tried to convince E to share it but he wasn’t convinced. Instead he chose the carrot cake and was most displeased that it wasn’t as light as the carrot cakes he had had in Scotland. But my cheesecake was fantastic. It was a dense baked cheesecake with a dark crumbly crust with a cinnamon scent and lovely rosy pink stewed rhurbarb on top. If only I hadn’t been so full from dinner at nearby Lentil as Anything, I might have enjoyed it more. But I made a decent effort and then E and Will happily polished it off between them. 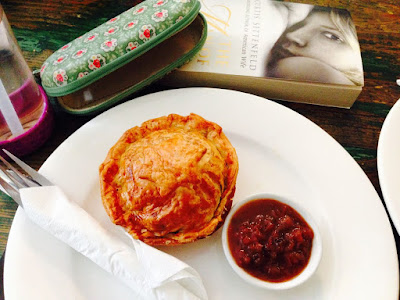 Will had the passionfruit sponge which had a deadly amount of cream sandwiching the sponges together. He got his cappuccino too. I had peppermint tea and was pleased to see it was loose leaf. Another plus.

My one complaint is the difficulty in finding the name of the cafe. For ages I thought it must have been called Illy because there is a big Illy sign, but that is just a brand of coffee. There is a little box in the window with ‘Green’ written on it. But when I searched the web, I found it is called The Green Refectory. 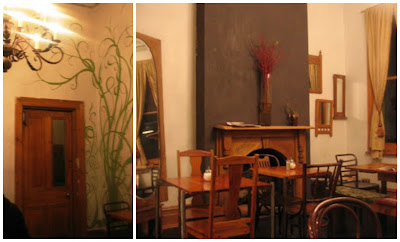 I like the ambience of the Green Refectory Café. As well as a newspaper on our table there was a kids story book about a little bear. It is old terrace house with modern chandelier and fireplace. The decor is very funky retro with simple brick walls, warm greens and an odd assortment of wooden furniture. It wasn’t as busy as when I have been there for brunch but it still felt welcoming on a cold wet night.

Update 2015: I have updated the photos with one of a lovely chocolate muffin and one of a satisfying bean, mushroom and feta pie that I had last year and are much clearer photos.  As well as the pie, I have really enjoyed their vegan sausage rolls that can be found at the cafe or the sister Green Refectory pop up cafe down the road.  I have left the original photos in the post but as they were taken within a couple of months of starting this blog their quality is less impressive.  Update 2018 - The pop up cafe is closed but the vegan sausage rolls were also available at the 115 Sydney Rd cafe so I hope they still sell them there but haven't been there in some time.
Posted by Johanna GGG at 23:48