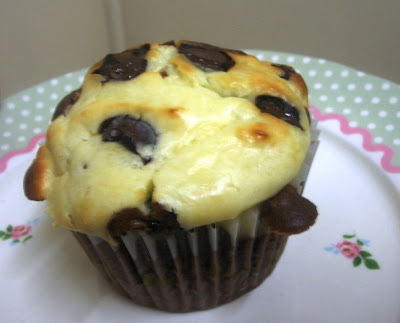 I have a newfound love of cupcakes – blame it on blogging, on my sister’s wedding cake plans, on baking for kids! So I have enjoyed hours in bookshops browsing through cupcake books. There are lots out there. Then I tried to convince myself I should plough through all the muffin recipes I have. But I kept dreaming of owning one book – Cupcakes Galore by Gail Wagman.

Cupcakes Galore isn’t just a recipe book. It is also a picture book. It is written by an American in the South of France – I imagine her in some rustic peasant kitchen pulling trays of cupcakes out of a woodstove and placing them on a wooden table which groans under bowls of pink and green and blue icing, and the piles of decorations. Where else would she take her enticing photos 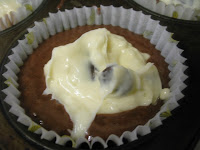 of pretty cupcakes topped with swirls of frosting, sprinkles, nuts and fruit? The recipe imitate all manner of food and drink: like root beer, margaritas, soda bread, cheesecake, tiramisu. Her creativity knows no bounds and she even suggests the recipes can be made as a large cake too. It is fun, playful, even a little crazy! I had to have it. The child inside me demanded it and I couldn’t say no!

I love perusing its mouthwatering recipes. But a few weeks have passed since my purchase without me actually using the recipes. So when my friend Jane, with two 4 year olds, invited me for dinner, I said I would make cupcakes. It was exactly the motivation I needed.

E and I were out in the afternoon so I didn’t have much time for baking but cupcakes seem a lot quicker than a big cake. I have been hankering after some of the cupcakes with cream cheese in them. So I chose a recipe called midnight madness. A dollop of cheesecake-like mixture is dropped into the cake mixture. Then they are iced with black icing and little stars and moon decorations. I didn’t have time for icing them and they tasted so good without icing I think 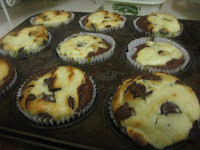 maybe they should be renamed full moon cakes. (Isn’t it the full moon that creates midnight madness after all?) And if you were curious, the choc chips must be craters in the moon!

I made 12 rather than 20 because it seemed quicker to put them all in one muffin tin – so they were larger and maybe more ‘muffin’ chunky than ‘cupcake’ delicate. There may be some who challenge the ‘cupcake’ nomenclemature (but would that mean muffins are made by busy people who don’t own enough cupcake trays?)

They were only a few hours out of the oven when we ate them at Jane and Andrew’s. Their children, Lachlan and Laura, sampled them first before bed. I wasn’t offended that they didn’t eat the whole cupcakes. Instead, knowing how fussy kids are, I was gratified that they ate any. They ate mostly the cheesecake part which when fresh tasted almost like a frosting. I think I fooled them. Then Jane and Andrew and I ate them by candlelight accompanied by a fine red wine, in a more adult way, once the kids were in bed.

- Make filling first by beating together cream cheese, sugar, egg, salt and booze (if using) til smooth. I did it by hand but use electric beaters if you have the energy and equipment. Then stir in choc chips.

- Spoon cupcake mixture into cupcake papers and half fill papers. Place a heaped teaspoon of cream cheese mixture on top of each cupcake.

- Bake 15-25 minutes til firm. The recipe should make 20 cupcakes. I made 12 muffin size ones and baked them about 25-30 minutes. Mine were just starting to go golden brown when I took them out. The cream cheese filling is very soft when it comes out. Cool at least an hour before eating.

- If you want to decorate with black frosting and silver balls and banana shaped sweets you will turn these from full moon cupcakes to midnight madness cupcakes. But I think they are best eaten slightly warm without frosting.

On the stereo:
Barricades and Brick Walls: Kasey Chambers
Posted by Johanna GGG at 18:27