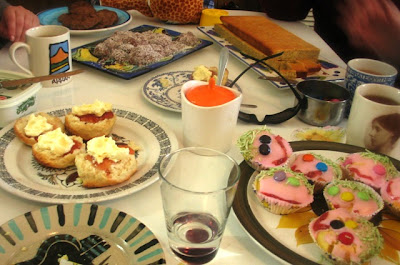 In my previous post I wrote about making pizza for lunch on Sunday. This was just a quick lunch but the main event was a gluten free afternoon tea for the family. Francesca and I had decided that our monthly baking day would be doing some gluten free food so that my sister Susie and her daughter Grace could enjoy it all. And we would have help from her partner’s kids. 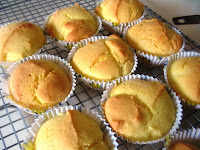 I actually made a batch of little cakes before Fran and Steve and kids arrived. For these I used a standard cupcake recipe and substituted Casalare gluten free flour for wheat flour. I even remembered to put baking powder in the flour. But when I made the sweet banana cornmeal cake from the Gluten Free Goddess, Fran and Steve had arrived. Maybe I was distracted but it was only when I took it out of the oven that I realised that I had not realised her gluten free flour mix was self raising and mine was not. So the bread was a little flat. But more concerning to me was that it was extremely sweet, despite me putting 1 cup of packed brown sugar rather than 1¾ cups.

I had a break from baking while we had pizza and then we got back to it with making chocolate chip cookies. A few weeks back I discovered that Dylan (7) shared a love of chocolate chip 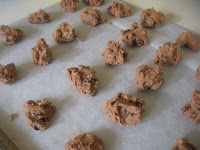 cookies with me. I promised we could cook some together and here was our chance. The recipe was from my Great Gluten Free Baking cookbook. It was straightforward which was just as well because as well as Dylan, we had his sister, Maykaylah (3), and the neighbour’s kid, Bailey (3). (Bailey’s dad donated some brown sugar so we managed to avoid a trip to the supermarket).

Cooking with kids was slow and, every now and again, one would loose concentration and walk away. Everyone had to have a turn, and, fearing a biscuit mixture full of dribble, I insisted that no one licked their fingers – it took much self control from all of us, myself included.

Next while the cookie baked, we made grubs. Grubs are a favourite from my childhood (I’ll blog more about these another time) and I thought we could try some different gluten free versions. 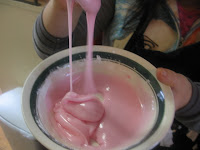 We mixed the can of condensed milk, some coconut, cocoa and tried a few different versions with substitutions for crushed sweet biscuits. We did a few with cornmeal, a few with ground almonds and quite a lot with chopped dodgy lemon yoghurt cakes from the previous day. They were so soft that I ended up rolling them all in coconut because they were too difficult for the kids.

By now we had plates of food appearing everywhere and it had started to rain. All we had to do was decorate the little cakes. Fran and the kids mixed up some pink icing while I did the grubs. I thought faces would be fun so I asked what colour hair. The consensus was green (which I approved of, having once dyed my hair green!). So we rubbed some green dye through some shredded coconut. I was a little wary of decorations, because I know many might have gluten. So I had specially bought some gluten free smarties for eyes and Fran cut up some fruit roll-ups into mouths. (Susie said she is even unsure about if fruit roll-ups are gluten-free.) 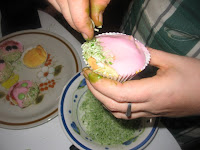 Grace, my little celiac niece, whose recent diagnosis has brought on the gluten free interest, is actually not so interested in sweet food and doesn’t really suffer from not being able to eat cakes and biscuits. But she got right into decorating the cakes by choosing the smarties for eyes. In fact, for all the baking, I think smarties were among her favourite food at the table.

My mum brought along some scones with quince jelly (her speciality) and cream because she felt like baking something herself – she had some gluten free scones in the freezer and had these for Susie and Grace, and gluten scones for the rest of us.

So, we had lots of food, which maybe was just as well for all the energy the kids spent running about our small place, and playing games. It amazed me that they never seemed to sit down with their food but managed to eat quite a bit.

The biggest success was the chocolate chip cookies which were excellent, and as good as any other cookies. They disappeared within hours so I never got to try them cold and see how they lasted. But I am sure I will make them again. The little cakes were also welcome. They looked 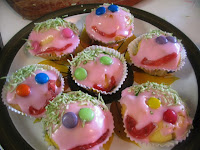 cute with faces, and kids love them just for the icing and smarties. There were a few over. They tasted pretty good for just doing a gluten free flour mixture substitution.

About a third of the grubs were eaten. They weren’t as plump and round as the ones I usually do. I think the best ones were with almonds. The cornmeal ones were ok – a wee bit crunchy. Unfortunately most of them had the chopped lemon cakes in them which were too soggy and I just didn’t like the lemon flavour – it seemed a good idea at the time but took away from the chocolate taste. The biggest problem was that at the time I couldn’t think about how to differentiate them so we struggled to find the almond and cornmeal ones, and all I seemed to find were the lemon ones. Next time I need to think these through a bit more – which probably means more thought before doing them with kids just before family arrives. Grace’s twin sister Ella, apparently has been loving the ones that were leftover after the afternoon tea. Ella loves all the gluten free baking that Grace is not fussed about.

And the disappointment was the banana bread – not much of it was touched. Fran didn’t like the crunchiness of the cornmeal. It was too sweet for me. We tried eating it with butter. I have 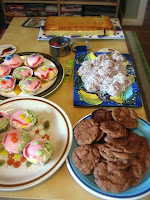 bunged it in the freezer and am hoping to get inspired to use the cake crumbs somehow – maybe in my next batch of grubs!

Overall the afternoon tea was a success. Food, after all, as much as I love to be up to my arms in baking, is not a means to an end, but is a great way to bring people together. The adults sat around the table of food and talked while the kids created controlled chaos under the watchful eye of my oldest niece, Quin (10). When the kids had enough of the food and play at my place, Susie and I went with them to the nearby park where the biggest excitement was waving at passing trains. And my family is so lovely that when we got back from the park, the dishes were all done and the place had been cleaned. Perfect end to a great afternoon tea.

The recipe says to blend everything except choc chips in a food processor. We just mixed it all by hand. The recipe said to roll each cookie into balls and flatten slightly with the back of a fork. Our mixture was too soft and sticky so we just spooned it out as shapeless blobs onto a lined baking tray and I found they spread as they cooked. Bake in 180C oven for 8-10 minutes (I think I may have forgotten them for a few minutes so can’t quite remember how long but I suspect it was a bit over 10 minutes, and probably just a bit too long). Let cool on tray a few minutes and then remove to wire rack to cool.

Cream butter and sugar. Add egg and vanilla essence and beat well. Add flour, salt and milk a third at a time, folding in lightly. Spoon into patty pans (lined with papers). Bake 15-30 minutes at 160C or til golden.

For more gluten free afternoon tea baking ideas - go to the GF section in my Index of Favourites.