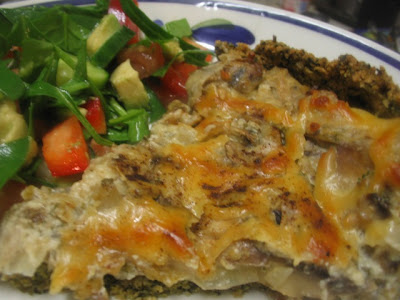 I wanted to be inspired by Bastille Day on the weekend but, honestly, I don’t cook a lot of French food. It always seems too meaty or too rich. So I thought: I am always coming across tempting tart recipes, so maybe this was the reason I needed to make one - a tribute to Bastille Day. I did a reccy of my cookbooks for tarts and pies. The recipe I kept coming back to was an old favourite from The Enchanted Broccoli Forest: Mushroom Yoghurt Pie with Spinach Crust. Actually, I don’t think it is at all French!

This is a pie I have made many times, in share houses and for E. I think it originally appealed to me because it has a nicely coloured base and it didn’t have a pastry that I had to roll out and

bake blind etc etc. Another reason I don’t bake lots of tarts is I don’t like making pastry. But this is just some spinach and flour pressed into a pie base. The filling is quite simple flavours, without the richness of lots of cream and eggs. I like the lightness and slight sour taste of yoghurt which is enhanced by the lemon juice.

I’d recommend the Enchanted Broccoli Forest for different sorts of pie crusts as interesting alternatives to ordinary pastry – nut crust, golden vegetable crust, mashed potato crust etc. And Mollie gives a ‘quiche formula’ for those who want to be able to make a quiche with whatever they have on hand.

I changed the recipe slightly – used frozen spinach instead of fresh, mozerella on top instead of cheddar and smoked paprika instead of regular paprika – but mostly I followed Mollie.

Mollie says it takes 2 hours to prepare, including the base. I think she is probably right (maybe a little less), so it was a nice one to make on a lazy Sunday night for tea on the knee in front of the 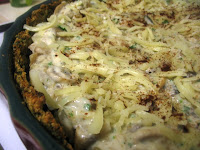 telly. I served it with a simple salad of baby spinach, tomato, red pepper, cucumber and avocado. And there were leftovers. A couple of pieces were eaten on Monday and another couple are in the freezer.

Actually, I was going to have one of my leftover pieces tonight but instead I went to an opening of an interesting exhibition of needle and syringe cultures and the food there was so good I didn’t need dinner. It had everything about syringes and needles: from diabetics, to HIV to Trainspotting to cake decorating!

To make the crust:
- Melt butter in a large heavy skillet or medium-large saucepan. Fry spinach til just wilted and remove from heat. Add remaining ingredients and mix well
- Tip mixture into a greased 23cm pie pan, and use your fingers to push into the pan. This took me a little time and patience of moulding it to fit the pie dish.
- Bake 15-30 minutes. I like a crispy crust and baked it 30 minutes til it was starting to turn golden brown.

While the pie crust is cooking, start on the Mushroom Yoghurt Filling:
- In a medium-large saucepan (or Mollie’s skillet) fry onions in butter til soft (5-8 minutes).
- Add mushrooms and lemon juice. Cook over medium heat about 5-8 more minutes.
- Sprinkle flour into mixture, stirring frequently. Cook another 5-8 minutes while stirring a lot (and don’t get distracted with pie crust coming out of the oven like I did because it gets quite thick and can brown on the bottom). Take off the heat.
- Beat together egg, yoghurt, pepper, cheese and parsley. Stir into mushroom mixture.
- Spoon filling into pie crust (it is ok if it is hot) and sprinkle with extra cheese and paprika. Bake in 350ºF oven for about 30 - 50 minutes – I think it took me 50 minutes to get it nice and golden on top like I like it.

On the Stereo:
Wide Eyed and Dreaming: Sea Stories
Posted by Johanna GGG at 20:35