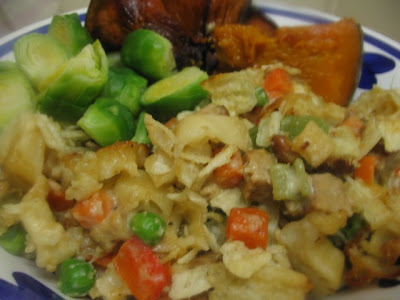 When I was little, my mum used to make us tuna casserole. She made it with egg in it, which I never liked so I always got a special eggless casserole for one. I guess it was a good grounding for life as a vegetarian, being the odd one out – or some might argue, it shows I was always the difficult one. 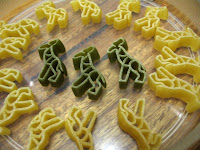 Well, recently I came across this recipe for jarlsberg tempeh casserole on the PCC Natural Markets site. Both E and I love jarlsberg cheese and now that I have finally opened the chunk of it to make this casserole, we will begin slicing our way through it. That is how I usually eat it – on bread and dry biscuits (crackers). But I thought this recipe interesting because the little introduction suggested it was as comforting as tuna casserole. (Hence my need to buy pasta in the shape of jungle animals - including giraffes - but who doesn't get delighted by green giraffe pasta?)

I talked to my mum about this recipe because I wanted to check that she served tuna casserole with crushed potato crisps on top of it. She said I was confusing it with patties made with mince, mashed potato and mushroom soup (I think) which were rolled in crushed chips. Well, I don’t think that is what I am thinking of and now am a little unclear about where my memory comes from. I had another recipe, years ago, for a pumpkin and smoked cheese bake topped with crisps and cheese which I had thought took me back to tuna casserole. We loved the pumpkin 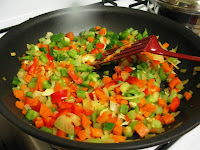 bake recipe but lost the recipe soon after I made it, so my choice of crisps (rather than cornflakes or breadcrumbs) is also a salute to that dish.

This jarlsberg tempeh casserole took quite some time. I almost made it the previous night after Maddy’s party but I discovered I had no onions and so we ended up eating beans on toast. When I made it I was glad I waited for a night when I had time to potter about.

The casserole wasn’t quite as creamy as I had expected – maybe this was because I added some extra veggies, or maybe it was because I reduced the oil from 6 to 2 tablespoons. But on the plus side, it wasn’t horribly rich 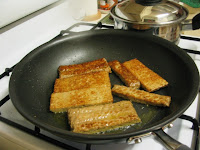 and overwhelmingly dairy. In fact it was like a fancy macaroni cheese more than a tuna casserole. I would be prepared to say the tempeh was far better than tuna. It did give the dish a lot of substance and I would cook it this way again, although I would be interested to try the tempeh either grilled or grated instead of in fried chunks. I also had a chance to use my Worcestershire sauce I made last week, but the casserole might have done with a bit more seasoning.

I roasted up some pumpkin and steamed some Brussels sprouts to serve with it, which gave some colour to the meal. But any steamed vegetables or salad would be an appropriate accompaniment. In fact, the casserole had so many veggies in it that I think you could even serve it by itself.

I am sending this to Ruth at Once Upon a Feast for Presto Pasta Nights.

Preheat oven to 375°F. Lightly oil a large casserole dish and set aside.

In a large fry pan heat oil until hot. Fry tempeh squares until lightly browned on both sides (about 10 minutes total). Drain on paper towels, sprinkle with salt and set aside. (Alternatively brush with oil and grill til brown, or just grate it.) When cooled slightly, cut tempeh into small squares.

In same pan over medium heat, fry onion, celery and carrot until lightly browned (about 10 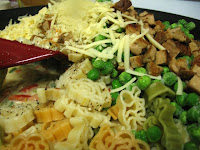 minutes). Add peppers and garlic and cook until softened (about 5 minutes). Stir in flour and cook over medium low heat about 1 minute (mine was very dry at this point but it still seemed to work ok when the milk was added). Remove from heat and stir in milk. Return pan to heat, gradually bring to a light boil and cook until sauce thickens, about 5-10 minutes, stirring frequently.

Remove from heat and stir in cheese, tempeh, pasta and peas. Season generously with salt and pepper, then Worcestershire sauce. Pour into casserole dish and sprinkle with crisps and bake for 25 to 30 minutes or until lightly browned and crisp on top.

On the Stereo:
Discography: Pet Shop Boys
Posted by Johanna GGG at 22:53