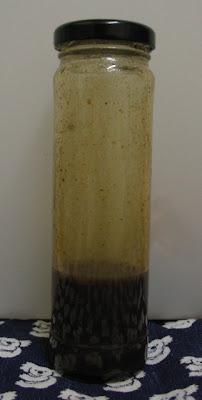 I haven’t had Worcestershire sauce since I went vegetarian. I don’t remember being a huge fan before that, but soon after I heard it had anchovies in it and therefore was not vegetarian fare. Quite possibly I had eaten it inadvertently but I couldn’t tell you how it tastes.

But I wrote down a recipe in the first flush of vegetarianism and was determined to make it. The years passed and I got used to substituting soy sauce for Worcestershire sauce. I often passed the recipe while browsing in my notebook but it seemed less urgent. Then one day recently I realised I had most of the ingredients in my pantry and it no longer seemed so overwhelming. In fact it looked downright simple.

I made it last Wednesday and followed the recipe fairly closely. I put all the ingredients in a small saucepan (pictured) and simmered for an hour. Seemed easy. I turned on the oven timer and busied myself with other things while it simmered. At the end of the hour, the sauce barely covered the bottom of the saucepan (pictured). So once I had strained it (through a tea strainer which was 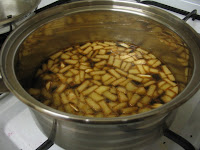 too small) I maybe had 30ml (pictured). The recipe said I should have 250ml. My mum said I must have boiled it too fast when I asked her. It tasted pretty strong so I added enough water to make up 150ml.

When I was at mum’s place yesterday I checked her bottle of Worcestershire sauce – for one horrible moment it occurred to me that maybe in the last 15 years they had stopped putting anchovies in it. Nope! But maybe there are vegetarian alternatives on the market I could buy and save myself the trouble?

Thinking about the anchovies, I began to wonder why there was no salt or soy sauce or stock in the recipe I had followed. Now I don’t know where I got my recipe but today I got a book out of the library called The Ethnic Vegetarian: traditional and modern recipes from Africa, America and the Caribbean by Angela Shelf Medearis. This book had a recipe for vegetarian 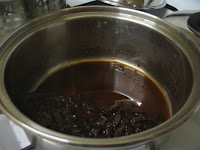 Worcestershire sauce – the only other one I can recall ever seeing. Her recipe is a little more complex – onion, mustard seeds, garlic, cinnamon, ginger, pepper, cloves, chilli, cardamom, white vinegar, molasses, soy sauce, tamarind pulp, salt and curry powder. Maybe I will try this one next time.

My next challenge is that I still am not sure if it tastes right – I think so – but having not tasted it for years, the closest I have is sniffing mum’s bottle yesterday. I just couldn’t bring myself to taste it – it seemed to defeat the purpose of the exercise. But I am excited about trying it out so stay tuned!

Place all ingredients in a medium saucepan. Stir over low heat til all ingredients are mixed. Cover and simmer approximately one hour (keep an eye on it and simmer for less time if needed). Rub through a strainer. Some of the sediment needs to come through into the sauce as Worcestershire sauce traditionally has some sediment at the bottom of the bottle. Makes approximately 500ml (according to the recipe). Can be stored in a screwtop bottle for several weeks.

On the stereo:
Carnival in Babylon: Amon Düül II
Posted by Johanna GGG at 22:07