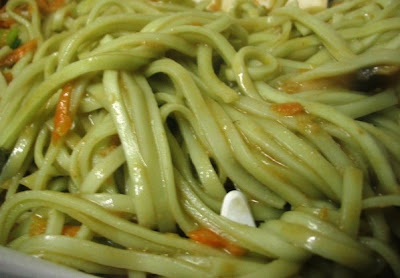 This is a weeknight dinner that I thought looked quick and easy. Most of the ingredients were in my kitchen - all I had to buy was spring onions and accompanying vegetables. It is one of those recipes that I only noticed recently despite the many times I have poured over my Anne Marshall cookbook in hope of inspiration.

Recipe books are like that. I read them so many times and yet depending on mood and available ingredients, some days they surprise you with a recipe. I sometimes start novels a few times before I race through them. I think recipes are like this too. When I was a student we called this the reciptivity theory - which is sort of a bit like Hemmingway saying if it feels good, it is good, 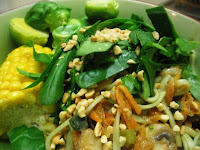 but in this case it is a matter it is right if it feels right at that moment in time (aah, student days when we had time and energy for such discussions)! Anyway, sometimes I am just not ready for recipes and then one day I find that they are just what I want and need and can do. So it was with this recipe. After lurking in the shadows for years, it jumped out at me.

I was attracted to the unusually addition of tahini in a spicy Asian sauce which did indeed add a certain creaminess which would probably be welcomed by those with nut allergies. The recipe has cashews but I used the chopped peanuts that I have had hanging around the pantry for some time, but it would be equally tasty without nuts. I added mushrooms and carrot which sort of disappeared in the sauce but no doubt added some flavour. It probably could have a bit more 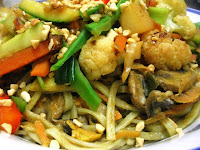 spices – Anne Marshall calls for 2 tablespoons each of garlic and ginger but as I don’t usually measure either garlic or ginger this way, I suspect I underdid it. E still added Tabasco sauce (and he even added some tomato sauce so he is just the hoi polloi!)

Stir fry chilli, garlic and ginger in oil for about 1-2 minutes over medium heat. Add spring onions, mushrooms and carrot and stir fry another 2-3 minutes. Add chilli sauce, tahini, soy sauce and stock and stir another 3-5 minutes. Meanwhile cook noodles in boiling water and drain. The recipe says to serve noodles in a bowl and then pour sauce over but I omitted to read that bit and mixed them together before serving. Sprinkle with chopped peanuts.

On the Stereo:
Greatest Hits: Happy Mondays
Posted by Johanna GGG at 21:44