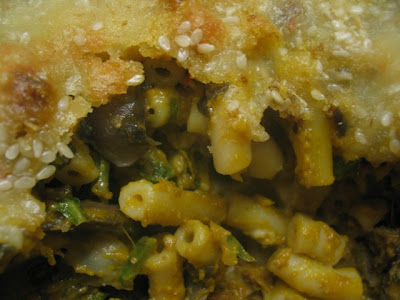 When thinking through recipes for Independence Day on Wednesday this week, I almost did macaroni cheese, but I felt I had already made one version of macaroni cheese on Sunday and Mexicale Pie was much easier. One of my ‘consultants’ on American food told me macaroni cheese was not a particularly American dish.

The Old Foodie wrote an interesting post on 4 July this year wrote of a book of choice recipes published in 1883 by a Ladies’ Aid Society from California which included a poem on food. The first lines were ‘Grate Gruyere’s cheese on macaroni, Make the top crisp, but not too bony.’

Very amusing – and I’m sure we all have had bony macaroni. Wiki talks of legends about Thomas Jefferson inventing it. So it has long been part of American culture.

But pasta came from Italy originally, and Wiki refers to the similarity to cauliflower cheese from Britain. Not only has the dish fused different cultures but it is part of many cultures. Wiki suggests it is common in British, American and Canadian cultures. I can vouch for it being fairly common here – or once was. But I was interested to find a mention of it on The Old Foodie’s blog. I love

The macaroni cheese that I remember is the one my brother Paul once made me while living with us. It has a thick cheesy almost yellow sauce which seemed more like melted cheese than a milky sauce – and most excellent it was. I have never been as bold as he with the grated cheese but it worked. Mollie Katzen has a recipe for a less traditional macaroni cheese that caught my eye. Interestingly, she describes this one as being in a Russian style.

I’d actually bought the ingredients to make Mollie’s recipe, so was keen to make her ‘lite’ macaroni cheese with cottage cheese, 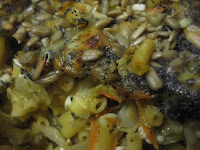 cabbage and caraway seeds. But then I decided my leftover roast pumpkin would be good and that if I made Vegan with a Vengeance’s facon (fake bacon) that it would be interesting to put it in a mac cheese, given that it is traditional to add bacon. Then I got nervous about the facon spoiling it if it wasn’t right. I had so many vegetables I decided to do two versions and put most of it in the freezer for later.

The Russian macaroni cheese was indeed light and given a distinctively eastern European flavour by the caraway seeds. The cheese didn’t come through very strongly, even though I put extra cheese – I had been about to put it in the oven completed with cheese sprinkled on top which I realised I hadn’t added the macaroni. So I added the macaroni and more cheese on top. This one was a little watery and would possibly reduce the cottage cheese or buttermilk next time.

The pumpkin and facon macaroni cheese (which used up leftover cream) was much more creamy and rich. The pumpkin was so well cooked it melted into the sauce but it added to the creamy taste and gave a lovely orange colour. It had a more traditional Italian taste with 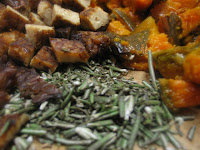 rosemary added but also pleased me because it echoed the tastes of a traditional Australian roast dinner with rosemary and pumpkin. The facon wasn’t as crispy as I would have hoped – maybe nutroast would be better and then it would truly feel like roast dinner macaroni and cheese (echoing cauliflower cheese too of course). This might be a great way to use up leftovers from my next roast.

I am sending both these macaroni cheeses to Ruth at Once Upon a Feast for Presto Pasta Nights.

Cook pasta according to packet instructions. Fry onions in butter for about 5 minutes in a large saucepan. Add garlic, mushrooms, cabbage and carrot. Cover and cook over medium approximately 10 minutes or til cabbage tender. Turn off heat and add spinach and stir til wilted. Add salt, caraway, cottage cheese, buttermilk, dill and cooked pasta. Sprinkle with cheese, sunflower seeds and poppy seeds. Bake in moderate high oven approximately 40 minutes or til crisp on top.

Cook pasta according to packet instructions. Fry onions in butter for about 5 minutes in a large saucepan. Add garlic and mushrooms. Cook about 10 minutes or until mushrooms just cooked. Turn off heat. Add facon, pumpkin, salt, rosemary, spinach, cottage cheese, cream, and cooked pasta. Sprinkle with cheese, sesame seeds and breadcrumbs. Bake in moderate high oven approximately 40 minutes or til crisp on top.

On the stereo:
Picaresque: The Decemberists:
Posted by Johanna GGG at 21:59