We saw the new Harry Potter film last night. One of the things I love about the movie was the dining tables groaning with puddings of all kinds. These are the sort of puddings that I think our spirits yearn after as a link with our past, but our stomachs would probably rebel against as too sickly sweet! I thought it was very British that we saw them eating lots of meat and pudding but not the pumpkins that grew outside Hagrid's hut.

Harry Potter made me think about eating rich decadent food and I decided it was time to pull a wee friend, Hubert, out of my archives (I mean archives in a loose sense – but I do happen to have digital photos of this magnificent midwinter meal, and I would like to share this recipe!).

Hubert was a vegetarian hog’s head who starred in a grand feast that would not have looked out of place in Hogwarts dining tables.

I own one of the classic 1970s vegetarian cookbooks, the Book of Tofu. It has some wonderful drawings of faux meat, including a tofu hog’s head. This seemed to be the ultimate faux meat experience and my friend Yaz decided he wanted to seek out one. But in fact, the idea of eating faux meat horrified me.

Then we decided to hold a Christmas in July dinner a couple of years ago and Yarrow’s vision was to have a vegetarian hog’s head in the style of a medieval feast. I found it gross searching the web for images, but at least we had decided it wouldn’t taste like meat. Instead we were going to use nutloaf and puff pastry. I have to give most of the credit to Yaz for his creative vision.

So we made a large quantity of nutloaf (any recipe would do but if you want a recipe, you could check out this one I made in June) and moulded it around an ovenproof pudding basin, with a

Then we used puff pastry, basted with egg, to cover it to form a crackling-like skin. We cut out small holes for eyes and filled them with a slice of stuffed black olive (with the stuffing taken out) and a bit of glace cherry in the middle of the olive). The little round nutloaf was attached to form the top of the snout. You can see on the photos that the snout was covered by cutting a circle of pastry and cutting two small holes in it like nostrils – then a long thin strip was wrapped around the snout so it looked like a cylinder. We wanted the mouth to have an apple in it so we used some metal tongs to lever it open while it cooked. Yarrow did some triangles for the ears and folded down one slightly to give a bit of character. These were baked separately and then attached with a toothpick 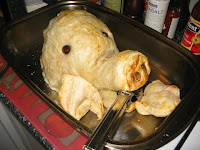 As the hog’s head came together it was starting to look quite real and so we named him Hubert. We became quite fond of him. When we served dinner, he looked majestic with an apple in his mouth and surrounded by crispy roast potatoes and sprigs of parsley. It was really hard to carve him up and eat him but he did taste delicious.

It was a couple of years ago so I am a bit hazy on baking times and amounts but if you ever want to amaze and horrify meat eating friends, I would recommend you try this. It’s fun! It’s unusual. And it makes a far better impression than a breast of tofurkey!

PS - On the Sacred Earth site, Kat Morgenstern writes that 'the pig signifies fertility and the apple is a symbol of regeneration and renewal.' To read more fascinating stuff about festive food traditions (and see the featured pic of Hubert) go to the article on Festive Foods.
Posted by Johanna GGG at 20:29