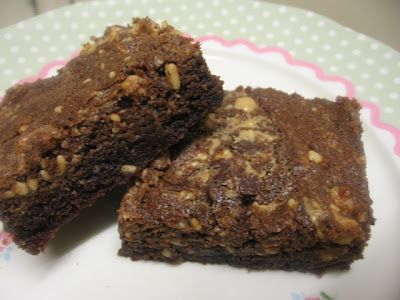 Last night my friend, Heather, visited for dinner and I wanted to make something American as a nod to it being Independence Day in the USA. I struggled to think of an American main course (stay tuned for my solution) but found it much easier to think of American desserts: pumpkin pie, boston bun, brownies.

I have long had my eye on a Chocolate Peanut Butter Brownie recipe from Tara at Should You Eat That . Peanut butter in sweet food seems particularly American to me, as do brownies.

I have a particular love of peanut butter. As an adult student I shared a house with a sister of a primary school best friend. She told me they always had to have peanut butter in their house for me. Peanut stew, peanut sauce, peanut butter sandwiches. I love them all, and wish it wasn't so rich and calorie-ladden or I would eat them even more. I don't often cook with it in sweet food. But here was the perfect opportunity, thanks to Uncle Sam for the excuse. Of course it had to be with chocolate. 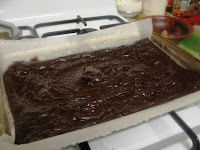 was overwhelmed, but I stuck with this recipe because it made a small amount, didn’t have many eggs, and I liked the idea of swirling peanut butter in brownie mixture in the baking tin.

I put them in the oven before I started on main course so they wouldn’t be too tongue-burning hot when we ate them after dinner. They were quite crumbly when I cut them hot. I had baking paper hanging over the edges and so we got them out of the tin using the paper (it took Heather and me each holding a side of overhanging paper to heave the brownie slab onto the wire rack still on the paper). They actually seemed to cut better once they cooled for a few hours.

The swirly peanut butter on top made an impressive marbled effect. The bottom was lovely rich chewy chocolate. I had thought it a bit odd that it used plain flour and no rising agent but this 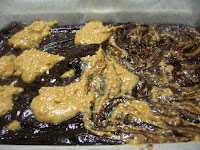 was not a problem. The main concern last night was that I found them a little crumbly on top where the peanut butter had been swirled, and you could taste the savouriness where it wasn’t quite mixed in. I wondered if this was because the peanut butter was an unadulterated one made with just peanuts rather than being full of oil, salt and sugar. Or maybe I had left them in a little long? Or maybe it was because I put in half a cup of peanut butter rather than three-quarters of a cup? Paranoia is so easy with a new recipe.

However tonight the peanut seemed to have fused with the chocolate mixture and they were chewy chocolate all through with a crunchy peanutty top. So I think they are better if they sit for a day. This will be a hard recipe to make for me because I like my baking fresh and warm from the oven but I think these are worth the wait. I would like to try a few more of the peanut butter brownie recipes I found, but I hope I will be making these again.

1. Preheat oven to 160ºC and line the base of a 16 x 26cm slice tin with baking paper. Let the paper hang over the ends so it is easier to get the brownies out once they are cooked.

2. Melt chocolate and butter in a medium-to-large mixing bowl. Microwave a minute. Stir. Then microwave in 15 or 30 second bursts til just melted. Stir til smooth. Add eggs and sugar to the chocolate mixture, and give a brief stir. Add plain flour & cocoa powder and stir until just combined (don't overmix). It makes quite a stiff batter.

3. Spoon mixture into prepared pan. Spoon peanut butter in dollops over the brownie mixture and create marbled swirls with the blade of a knife, a skewer or your fingertips.

4. Bake the mixture for 35-40 minutes. It is ok if slightly undercooked. Cool slightly before removing from pan. I think it would probably be ok to cool completely in pan and then cut but I would have to try this to be sure.

On the Stereo:
Songs from the South: Paul Kelly’s Greatest Hits: Paul Kelly
Posted by Johanna GGG at 21:09