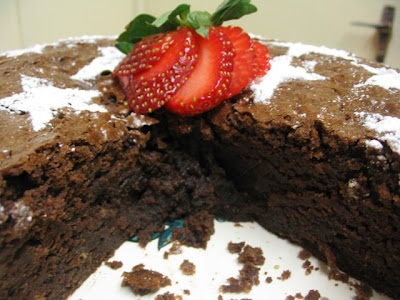 I love chocolate cake. I love it rich, dense, fudgy. But when I was growing up, I thought chocolate cake was a butter cake with cocoa. Then along came mud cakes.

Mud cake was a wondrous revelation of how decadent chocolate cakes could be. I discovered them before brownies and flourless chocolate cakes, before I owned cookbooks like Death by Chocolate. I have one recipe from the Women’s Weekly that I have used for years and never fails to deliver. It is too good to need to be iced and it goes by the name of Mississippi Mud Cake but I am not quite sure why – E cheekily suggested since I was using Scottish whisky I could call it Glasgow Mud Cake.

Suddenly mud cakes were so trendy that cafes everywhere started serving them, and still 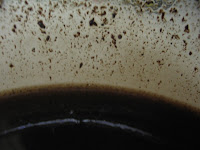 do. But familiarity breeds contempt. Mud cake in a café is a fine thing when it is done well but too often it has been drying out and/or sitting in a fridge and is more like a dried crust of mud than the fresh oozing mud the name alludes to. In this time of drought, we want our food to remind us of moist fertile soil rather than the dusty arid paddocks.

What actually made me yearn to make mudcake was my interest in Australian herbs and spices. Anh at Food Lover’s Journey recently made a wattleseed apple and almond cake which looked fantastic (and gluten free) but it used 8 eggs. Now for someone like me who buys eggs in half dozen cartons, this is a lotta eggs. But what particularly attracted me about wattleseeds is hearing them described as having an intense nutty aroma that has similarities to coffee. Not only do I shun lots of eggs but I hate using coffee in cakes. I know I sound fussy but I don’t like the taste. (I often wish I loved coffee on a sleepy morning but I have tried and failed).

Many chocolate cake recipes use coffee which I often put in begrudgingly, knowing that the bitterness is needed to counteract the sweetness. However, I was quite excited at the idea of using ground wattleseeds instead of coffee. So the first cake that came to mind with coffee was mud cake. I had to try it.

I love baking on a winter’s day. It is dark outside, the clothes are drying on a rack by the heater, E is reading on the couch, relaxing music on the stereo, and no rush. This is one of life’s luxuries. 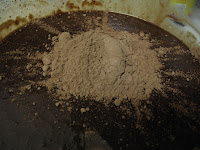 Comfort is found in making a recipe we know well as much as eating a familiar food. It is a pleasure to stir such glossy and smooth mixture, and, of course, to sample the batter for quality control purposes.

We ate it after it had sat a few hours but it was still warm and sludgy. It was with delight that I remembered just how good mud cake could be. The top is a thin crisp shell the hides the oozy fudgy middle. The recipe called for a square cake tin so you can cut it up into squares but I like it in a round tin and served in wedges so everyone gets a share of the soft yielding centre. It was so good I wanted to eat and eat it but it is a cake to be eaten in small slices, shared with many and, as a last resort, frozen in slices to be enjoyed later.

I can’t say I really could taste the wattleseeds because the taste of whisky is quite strong in the cake but I did feel happier that the cake had the bitterness of coffee without the coffee. I will continue to investigate how wattleseeds can replace coffee in cakes – but I love them already just because they are another excuse to make more chocolate cakes (as if I needed any)!

Combine butter, chocolate, water, sugar and whisky in a large bowl and microwave til melted. (It only took me a bit over 2 minutes in the microwave on high. If you don’t have a microwave use a medium-large saucepan to melt these ingredients.) When it is all melted it looks like the chocolate hasn’t totally mixed with the other ingredients (see photo above) but don’t worry as the flours seem to bind everything. The recipe says to cool but I don’t bother with that.

Add flours, cocoa and eggs and mix til combined and smooth. The recipe says to sift flours and cocoa which I also don’t bother with – there are small lumps that look like there will be flour bombs in the cooked cake but the cooked cake always looks fine. 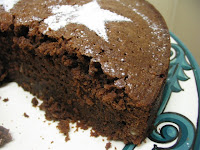 Pour into prepared cake tin and bake 1¼ hours. I don’t bother to test with a skewer as I think the cake should be slightly gooey inside. It needs to sit at least 10 minutes before turning out – I left mine 30-60 minutes (I was too distracted to notice exactly how long) and then turned it out onto a plate. It needs to cool for an hour or two before eating but is wonderful warm, dusted with a little icing sugar and served with cream and berries.

This is my entry to this month’s Sugar High Friday which is hosted by The Domestic Goddess. The theme in June is most favoured, most craved desserts. Update: Also see a more childfriendly version of the cake that I made in 2010.

On the stereo:
Dozin’ at the Knick: Grateful Dead
Posted by Johanna GGG at 00:10