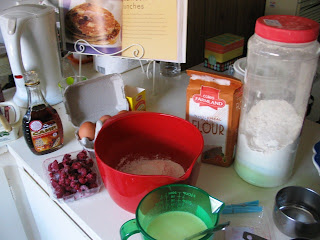 One of my favourite albums in the world begins 'This is the sound of someone losing the plot, trying to make out that they're ok when they're not'. Well it was the right soundtrack for my life this morning. Thank you Jarvis for your nervous breakdown album :-)

Some of my favourite breakfast foods are pancakes, maple syrup and raspberries. So I was excited last night to find a recipe in The Low GI Vegetarian Cookbook (by Jennie Brand-Miller, Kaye Foster-Powell, & Kate Marsh with Philippa Sandall) for pancakes with which would use up my remaining buttermilk, and use the raspberries I bought in summer and froze for a just such a winter morning. Seemed a good idea in theory.

But this morning it seemed like unmitigated disaster. I had a spot of domestic blindness and had to wake E to find my measuring cups. Then there were weevils in some of my flours. Then I halved some ingredients and not others and had to do a hatchet job with the recipe. I used less 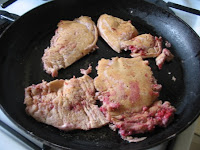 maple syrup than the recipe suggested because I wanted more on top than in. I had run out of buttermilk so I used some old cream mixed with water. Don't try this at home kids.

On top of that, when I tried some blogging while the pancake mixture rested, not only is my wireless broadband not working, but the whole internet account needed resetting. Argh!

I have put on photos to show hope as I started out, despair with the first pancake and then the final results which were very pleasing. Being able to sit and eat a lovely pancake with maple syrup was good and a relief that my frozen batch of summer's raspberries weren't used in vain. Below is a useable version of the recipe I used.

Mix buttermilk, eggs and maple syrup and add flour. Stir til mixed. Add raspberries and stir in (if you stir too much as I did they lose their form but the upside is the mixture becomes a lovely light purple colour). Sit 1/2 hour. Heat non-stick frypan on medium heat. Spray to just coat with olive oil spray. Pour a three or 4 spoonfuls (the recipes says to use a 1/3 cup measure). I spread the mixture to a nice round circle with a back of a spoon. When bubbles appear and begin to burst in the mixture, flip the pancake over. Then give it another 2-3 minutes on the other side. I just served them with maple syrup but would be great with some fruit, lemon & sugar, or butter and jam.

On the Stereo:
This is Hardcore: Pulp
Posted by Johanna GGG at 10:45