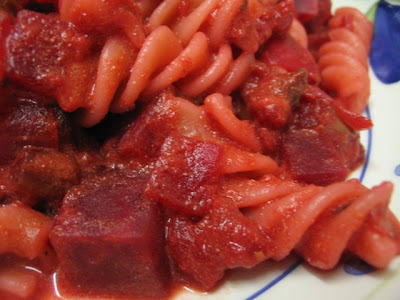 Tonight Melbourne was unusually foggy. It was like a London pea souper. The mist made the almost naked elm trees along Royal Parade look spooky but it softened the harsh edges of the industrial landscape on the bike path by the railway and made Brunswick look like the set of a romantic old movie. It looked so lovely but is not really ideal for riding a bike.

So we needed some good thick comfort food tonight to ward off the winter chills. I bought some beetroot at lunchtime. Red is such a warming colour and it is worth having stained hands to see the vibrant ruby red of beetroots. I love their sweetness and their ability to take on other strong tastes. Once of my favourite juices is apple, carrot and beetroot. I love beetroot dip and roasted beetroot but decided it was time for new challenges. I liked the idea of the beetroot curry on lime and lycopenes (which Lucy linked to this week) but pasta seemed easier. 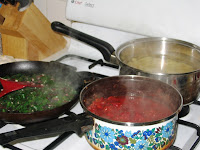 vegetables. Now I don’t make it much and, when I do, I am often being lazy and just do lots of veggies in the same water as the pasta and throw in a bottled sauce at the end. Probably also avoiding all those saucepans. I have no inclination to eat pasta day in day out but I don’t want pasta to drop off my radar altogether, either. Especially as I know it is always bound to please E.

Beetroot seemed an interesting idea. Beetroot makes me think borscht and vodka and Russian Cossacks in warm furry hats. Russian food seems just the thing for this weather. So I decided to try using my huge bottle of vodka that I bought duty free over a year ago and sat in the cupboard gathering dust. It is raspberry flavoured but I have made quite a few savoury meals with fruit recently so this didn’t seem a huge obstacle. 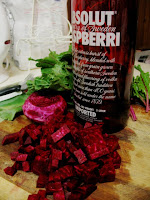 I have seen vodka in pasta recipes before but often it seems to go with a creamy sauce and I am not a big fan of those. So I did a quick search of the net to check if it was too outlandish to put it in a tomato based sauce that seemed quite alright – although I was a bit scared of a recipe suggested putting a flame to the vodka. So I took my inspiration for the sauce from borscht – beetroot, vodka, sour cream. I added some flavours depending on what needed to be used and what took my fancy. It was a great sauce – very smooth tasting with an intense tomato flavour and a sweet edge – and I do believe I could taste the vodka in there somewhere. E’s verdict was that it was unusual but very nice.

I think it was a bit too intense to eat without accompaniments. To serve I roasted some zucchini and Brussels sprouts in vodka, lemon juice, chopped garlic, salt and pepper at 230ºC for about 35 minutes. I also chopped and fried the leaves from my beets with some raspberry vinegar, mirin, chopped garlic and salt. Not sure about the beet leaves which I haven’t tried before but would like to try them with other accompaniments. They were a little bitter and as soon as I added the orange juice to the sauce I realised I should have kept it to fry the beet leaves in so might try this next time.

Heat oil in large saucepan. Fry onion and celery in oil about 15 minutes over low heat. Add beetroot and cook another 5 minutes on low heat. Add mushrooms and garlic. Turn heat up to medium and cook 10 minutes. 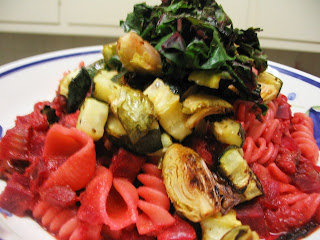 Add vodka and heat on high approximately 10 minutes, stirring frequently, until the vodka is almost all evaporated.

When beetroot is tender turn off the heat, remove the bayleaves and stir in the sour cream (if using). Drain pasta and mix with beetroot sauce. Serve hot with extra sour cream or cheese and roasted or steamed veggies or a salad.

I am entering this pasta dish into Presto Pasta Nights that Ruth hosts at Once Upon a Feast.

On the Stereo:
Angels in the Architecture: Various Artists
Posted by Johanna GGG at 00:49