Isn’t it strange how we believe what we read, or what we think we read? Well tonight I decided to use up my leftover Guinness from the cake I made on the weekend. It was only as I started to check over my recipe once the bread was in the oven, that I saw I had missed a vital word in the recipe – ‘OR’.

Yes, I put in the two cups of wholemeal flour AND two cups of oatmeal and oatbran. Oops! I had liked the sound of the recipe because it sounded like an Irish soda bread but more wholesome grains and the slightly bitter dark taste of Guinness. I love soda breads because they are quick and straightforward and usually pleasingly soft. But this dough was 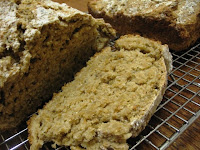 quite stiff which I thought was the recipe but have now discovered it was because I inadvertently added an extra two cups of flour through carelessness. Despite my oversight, the bread tasted surprisingly good – a little moist and stodgy but not bad for a total carwreck of a bread. I have reproduced the recipe as it should be rather than as I made it.

I served it with a variation on a dish I made recently – Pickled Brussels Sprouts. I cooked some beetroot leaves recently and wasn’t keen but Lucy who introduced me to the sprouts recipe, encouraged me to try again. So I did. But I found them a little bitter last time and thought some orange juice might make them more palatable. So why not Cointreau as well. I added lots of veggies to make it a full meal rather than a side dish.

I wont give an exact recipe for the Orange Veggies but I can tell you what I put in: olive oil, 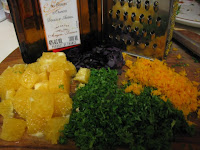 brown onion, Brussels sprouts, mushrooms, garlic, beetroot leaves, chickpeas, juice of half an orange, chopped flesh of half an orange, zest of one orange, Cointreau, parsley, purple basil,. Served with corn on the cob and Guinness bread, these veggies were great mix of textures and colours – and I never even noticed I forgot to add salt (until now when I list the ingredients). One thing I noticed today and found quite pleasing was the pinkish colour the beetroot leaves give out. Maybe this dish will be a regular (thanks Lucy).

In a large mixing bowl, combine the flours, sugar, soda, and salt. Rub in the butter. Add buttermilk, and Guinness and mix well. Spoon into prepared pan and sprinkle with 1 to 2 tablespoons plain whole wheat flour.

Bake for 30 minutes, then reduce heat to 400º F and bake 15 to 30 minutes longer (mine too another 15 minutes). Bread is done when a skewer inserted into the center comes out clean. Turn off the oven and cool with the door open for 30 minutes. I left it about 15 minutes and then ate it hot. Cool it if you want as the recipe suggests but I was ready to eat it.

On the Stereo:
Deserter's Songs: Mercury Rev
Posted by Johanna GGG at 21:02