Do you remember in Charlie and the Chocolate Factory when Violet Beauregarde tried the three course dinner in a gum? It seemed such a wonderful idea. But the blueberry pie turned her into a blueberry. This is story of my attempt to put a roast dinner into a burger.

I have described my roast dinner from the weekend. Well we ate it two nights running and I still had heaps leftover. The remains of the nutroast is in the freezer but I wanted to make burgers out of the remaining veggies. I was sort of inspired by bubble and squeak. I love the idea of it but never have the leftovers to do it properly. Well when I check the web, it seemed it is potatoes and sprouts or cabbage. Sprouts were the one veggies I did not have leftover and no one used pumpkin, so I had to create my own version of bubble and squeak. 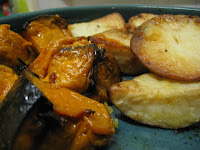 So I mushed up my cauliflower cheese with roasted pumpkin and potato. The pumpkin mushed up beautifully but the cold potato was unyielding and had to be chopped up. Then I decided to make it a reminder of the meal I would add ground nuts and breadcrumbs to remind me of my nutroast. If I had had sprouts I would have put them in too and may do next time. I am sure Willy Wonka would be impressed if he ran a burger joint rather than a chocolate factory. I think he would understand my decision not to include dessert, too. Don’t wont to risk turning into a blueberry :-)

I named these burgers, Red Rascal after the potatoes I used just because I loved the name. I served them with gravy so it did feel like having my roast all over again. I actually cooked them 20 minutes the night before so I could freeze some. This meant that I think they were a bit more chewy than necessary when I cooked them the next day but I was happy with them. I think the cauliflower cheese gave a great creamy cheesy taste to them, and they no doubt benefited from the sweet intensity of the roasted veggies. They would probably be just as good 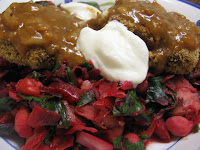 As well as the gravy, I served them with the stir fried onion, cabbage, beetroot, beetroot leaves, sauerkraut, mushrooms, chickpeas with a bit of garlic, lemon, smoked paprika and yoghurt. The veggies were nice but not nearly as nice as my burgers.

Mix all ingredients together in a large bowl. Form into patties. I made 12 small patties. Toss patties in extra dry breadcrumbs til covered. Spray with olive oil spray. Fry in non stick saucepan – about 5 mins each side (or alternatively put under the griller). Place in moderate oven about 20-30 minutes or til crisp. Serve with gravy.

On the stereo:
Choir of Hard Knocks
Posted by Johanna GGG at 21:51