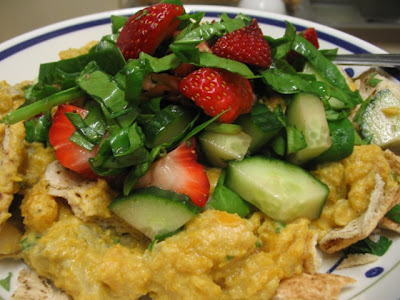 Let me tell you how much I love pumpkin. It is one of the few vegetables I ate regularly as a child and still love eating often. It adds so much flavour and colour to casseroles, curries and soups, is fantastic roasted for a couple of hours with the skin on, and was part of my favourite childhood mash of potato, pumpkin, peas and vegemite!

Imagine how difficult I found it living in the UK where pumpkin seems to be wheeled out at Halloween for jack o’ lanterns and a laugh. I did a spot of work as a carer in a little village in Warwickshire (no shops and two buses out a week) where I had to order food in once a week and had very little to do other than watch the telly, walk down the high street of thatched cottages, and think about what to cook for dinner. How excited was I to find that the next door neighbour grew pumpkins! But he only grew them for his pigs and thought I was crazy to want to cook with them. Admittedly they were not a patch on a Queensland Blue or a Kent pumpkin but it was good to find one when they were so thin on the ground.

Last night I had a yen to eat pumpkin and tahini. E was out so I was free to experiment without worrying about what I might serve him or others. So I did a search on the net. Most recipes were pumpkin salad with tahini or pumpkin hummus. Delicious recipes for summer. Not right for a cold winter night. Then I found one called Pumpkin with Chickpea, Tahini and Onion which seemed interesting.

The recipe from Mary Laird Hamady's Lebanese Mountain Cookery, calls for the frying of batches of pumpkin in an inch of oil. It sounds like a great idea if I had the time and the metabolism. But I decided to just throw the pumpkin in with the onions and sort of stir fry which meant it was probably mushier than MLH intended – in fact I don’t think she would recognize the recipe. But I love pumpkin mash. And once I had finished it, I saw that it was a warm deconstructed pumpkin hummus.

I served it with shards of crisp pitta bread in memory of the fantastic dish I had at the Moroccan Soup Bar last month. It is a thick warming stew that sticks to your insides. So I was glad I had a ‘salsa’ with it to lighten the creamy sauce. It made it a little healthier too. Tahini is good for you with lots of calcium but it is too oily and rich to have in large quantities. But this is a flexible alternative to the usual tomato based stews – it could have less tahini and more seasoning to make it lighter and other vegetables could be used such as more mushrooms, cauliflower, or some beetroot.

The salsa is one I found in my recipe notebook which had strawberries, cucumber and mint but 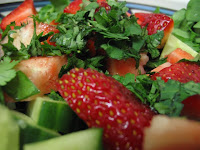 I thought I could just as easily use coriander to use up the bunch I bought for my TGRWT challenge. It is a sign of how little I buy coriander that I got it confused with flat leaf parsley and threw it in to my stew, thinking it smelt odd. Too much racing around the kitchen just before serving and thinking I had my bunches of herbs sorted out. I had to scoop it out because I didn’t want coriander in my nice stew. But I actually thought the coriander went well with the salsa.

- Preheat oven to 180ºC
- Heat oil in a large stockpot. Fry onion on medium low heat for 5 minutes.
- Add pumpkin, garlic, chickpeas and chilli paste and fry for 20 minutes over medium heat, stirring frequently or til pumpkin just tender.
- Add mushroom and chickpeas and stir another 5 minutes.
- Add salt, tahini, vinegar, and water. Simmer about 10-15 minutes.
- While stew is simmering, put pitta breads in the oven for 15-20 minutes til crisp (I had mine in for 15 minutes and they were crisp outside but the middles could have crisped up a bit more but I worried the outer edges would be too crisp). When done, chop or break into pieces.
- Divide pitta bread pieces between 4 bowls. Spoon pumpkin stew over pitta bread. (For a gluten free version serve with rice.) Top with Strawberry and Cucumber Salsa (see recipe below) or steamed green vegetables

Toss vegetables together. Drizzle with vinegar

I am submitting this to the Heart of the Matter which is being hosted by Joanna’s Food in June. This month’s theme is vegetables.
Posted by Johanna GGG at 21:05