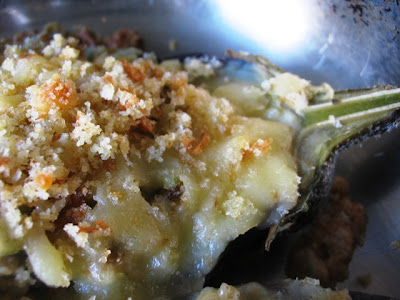 Recently I couldn’t resist buying some lovely black glossy eggplants I’d seen on sale in the supermarket. They always bring to mind a fantastic Charmaine Solomon recipe that one of my housemates, Will, introduced me to. When I left the house I wrote down the recipe and I can’t make it without feeling a little sentimental. It brings back memories of this student household where we all ate such good food because the five of us shared the cooking. We only cooked once a week and were able to put a lot of energy and creativity into the meals. How I miss that luxury when I rush in late, wishing a good meal was placed in front of me. If Virginia Woolf was around today, she would realise money and a room of one's own isn't enough for a woman. We need time and head space too!

The recipe in question involves eggplants stuffed with a creamy ground cashew mixture and a topping of crispy garlicky cheese and breadcrumbs. I really wanted to make it for dinner last night. The ingredients were waiting at home but my energy levels were too low to throw them together. Instead I ate something which could quickly travel from freezer to microwave.

Once my hunger was appeased I returned to thoughts of eggplants. I really wanted to do my baked eggplants before they went off. I decided the best way to do this was to spend some time preparing last night so I could skip in the door tonight and pop it in the oven. It is so relaxing to cook with plenty of time, some mellow music on the stereo and E on the couch reading Nostradamas Ate My Hamster (I have to mention this bizarre title)!

I made a few changes to the recipe. One of the most exciting changes was continuing to explore Australia’s Indigenous herbs and spices. I used Tasmanian pepperberries instead of black pepper. What a lovely smell – like the name says they smelled faintly of pepper but also the sweet aroma of berries too. I put in Tabasco Sauce to please E and fresh parsley because it seems superior to dried oregano and I need to use it. I wanted to make more changes but it is such a good recipe I didn’t want to mess with it too much.

My plan worked in a way. It would have been better if I had not got caught up at work - the 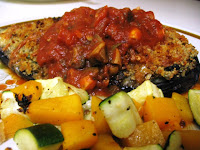 roasted pumpkin that I planned really should have been in the oven longer. It was only just cooked but the eggplant topping was crisp and brown in the way I dream of when I think of this recipe. The tomato sauce, which was just a jar of pasta sauce with some tomatoes, mushrooms and red wine sauce, was great. E is not a fan of eggplants but he ate it all happily.

Cut eggplants in half lengthwise (Charmaine says to slice stems off but I think they look nice and help keep the shape of the eggplant so I left them on). Score deep vertical cuts in the flesh. Drop in boiling water or steam in a large saucepan for 7-10 minutes until just tender. Drain well with cut side facing down til cool enough to handle.

While eggplant is cooling do your chopping and grinding. Fry onions oil over low heat in a medium sized saucepan til golden and softening – about 5 minutes. Add mushrooms and fry an additional 2 minutes. While the vegetables are frying scoop out eggplant centres, using a spoon. (Charmaine says to leave a thick shell to hold its shape but I left a fairly thin one – it still fills out ok but I figure this gives me more of a chance with E and his eggplant aversion.) Chop eggplant flesh finely. Take off the heat.

Add salt (if using – if you have salted cashews like me don’t use any salt!), pepper, cashews, and 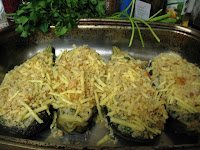 eggplant flesh. Stir to combine. Spoon mixture into eggplant shells and smooth down. I put a few drops of Tabasco Sauce on each (or you could add it to the mixture if you prefer).

Bake 25-35 minutes. Or you can prepare in advance like me and bake 20 minutes. I froze two halves for another day and baked the other halves for 40 minutes which gave a lovely golden brown crust but might have done less if my roast veggies had been quicker.

On the Stereo:
Is a Woman: Lambchop
Posted by Johanna GGG at 22:26