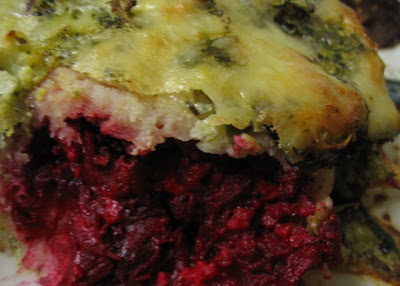 I love dumplings and I was excited to see that the Waiter There’s Something in My... event was dumplings this month. I have lots of dumpling recipes I’d love to make. Then I read more closely. Mine host, Johanna from the Passionate Cook, said they had to be stuffed. She kindly said this could include ravioli or wantons. Now ravioli and wantons are familiar to me but I could not fathom what sort of stuffed dumpling she meant because she is Austrian and seems to come from a tradition that is unknown to me. I was intrigued.

I spoke to my mum and asked if she had heard of stuffed dumplings from Europe. Nope. Both of us thought dumplings were little floury balls that you put in a stew to add bulk and soak up the flavour (or golden syrup dumplings if you wanted to talk about sweet dumplings). I think that is our Anglo-Celtic ancestry. 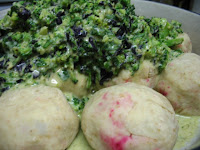 I realised that I had recently made pierogi which were probably closer to Johanna’s dumplings and she said I was welcome to do a similar recipe. But I need hours to make it and wanted to try something else. I did a stuffed dumplings search on the net and couldn’t find much, although when I searched pierogi I was amazed at the amount of recipes. I have only heard of pierogi from one friend but apparently there is any number of variations out there which mostly involve sauerkraut, potato and cheese. So I guess I could have tried one of these but I thought I would try Johanna’s dumpling dough and my own filling.

It is beetroot season here. I know because I read it in a foodie magazine in the supermarket queue yesterday. I love beetroots for their colour. Indeed, I have been imagining a beetroot filling in stuffed dumplings because it would have such a startlingly bright middle. I have even visualized the dumplings bleeding a scarlet blush through the dough. So I had to have a beetroot filling. And I was home from work a little early so I thought I had the bit more time I needed to make dumplings.

I had the choice between baking and boiling the dumplings. I was afraid they might fall apart in the boiling water and, if they survived their swim, I wasn’t sure how to serve them. All I could think of was a nun at my high school telling my class we looked like suet puddings with raisins for eyes. Baking seemed easier. 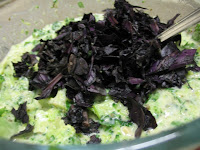 I made a sauce based on Johanna’s suggestions but with some colourful veggies – it wasn’t as uniformly green as I had hoped but had nice splashes of colour. When I chopped the gloriously dark purple basil I bought on a whim recently, I was delighted to be told by E that it looked like something out of a David Lynch horror movie. The downside to the sauce was that if my dumplings were blushing, I couldn’t see under all that sauce. E preferred calling them Dumplings with Wound (after one of his favourite bands, Nurse with Wound). It sounded too gory, but truth be told, they did almost look like a wound when cut open.

My problems started when I served. The beetroot filling which had tasted bland tasted quite lemony, the sauce which had been full of pesto tasted bland and the dough tasted like stodgy mashed potato. Probably the best thing was the great texture of the walnuts in the filling. It wasn’t as good as I expected for dinner that had taken hours (see photo to right). When I went back to the recipe I saw that we had waited ages, only to eat undercooked dumplings. Later, I discovered I had misread the recipe and only baked them about 25 minutes when it should have been 2 or 3 times that. Which means that if I had cooked them as long as Johanna suggested it might have 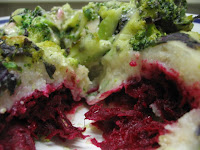 been over 3 hours preparation and cooking time.

But in the name of science I put the cold leftovers in the oven for another 30 minutes. When they came out both texture and flavour were vastly improved. The sauce was thickened to form a thin cover and the dumplings had firmed up (see photo at top of this entry). One of the risks of making unfamiliar foods is no expectations of how it might taste or look. I am looking forward to seeing what others make for the event.

It was hearty winter fare indeed. It does seem like a meal for a hausfrau who has hours to spend cooking rather than a working woman who rushes in the door already hungry before starting to make dinner. But I haven’t met a dumpling I don’t like (when it is cooked properly). Next time I think maybe a blue cheese sauce with them would be good or I might try cooking them in a tomato stew and serving with green vegetables. So thank you Johanna for opening a door to the unknown. I am sure I will be back to explore further.

Pour about 1 inch of cold water in a small saucepan and add potatoes. Cover and bring to the boil. Simmer until tender – It took me approximately 25 minutes from when I put them on the gas flame. Mash well – I use a potato masher and then stir with a spoon. When mixture has cooled add flour and egg and salt to taste. Turn out onto a floured board and knead a few minutes, adding some flour, til smooth. It makes a very soft dough that needs constant flouring or it gets sticky.

Place dumplings in a large greased quiche dish. Mix the buttermilk, egg, broccoli, pesto, spinach, basil and cornflour together. Pour over dumplings and make sure all dumplings are covered and mixture is evenly distributed. Sprinkle with cheese and bake at 200ºC for 45-60 minutes or til sauce has set and cheese is a golden brown. Serve hot with sauerkraut.

To Make Filling (while potatoes are cooking and cooling): Place beetroot, vinegar, garlic and water in a frypan on medium to high heat. When it starts boiling, cover and cook til water has evaporated – approximately 10-15 minutes. Add remaining ingredients and stir.

On the Stereo:
Sowiesoso: Cluster
Posted by Johanna GGG at 20:32