On Saturday night I had dinner with my friends Kathleen and Mook, and I said I would bring a cake. I decided to take a Chocolate Guinness Cake because it was Bloomsday.

I was fortunate enough to be in Dublin some years back on Bloomsday (16 June). For the uninitiated, James Joyce wrote Ulysses about a day in the life of Leopold Bloom on 16 June 1904. The novel gives such a detailed description of Dublin that over 100 years later it is still possible to trace Bloom's steps through the city, and that is one of the ways that Dubliners celebrate the day. I was able to enjoy readings on O’Connell St Bridge, in a pub and in a bookstore. I haven’t read the novel – it is reputedly long and difficult, albeit rewarding. In fact, most people I met in Dublin on that Bloomsday hadn’t read it so I didn’t feel so bad but I hope I will read it one day.

Ulysses was first published in Paris in 1922 by Sylvia Beach, ex-pat American and owner of Shakespeare and Company bookstore. She spotted genius and innovative use of language in the book but he was not the easiest person: on one occasion she described him as a Napoleonic figure who’d grind his fellow beings’ bones to make his bread. Luckily for Joyce, his books have overshadowed his personality. And if you want to see the sort of food Leopold Bloom ate, check out the Old Foodie.

Instead of the likes of kidney fritters, we had Mediterranean Pie and Chocolate Guinness Cake. 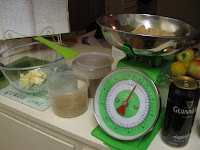 Much nicer and seemed appropriate given Joyce’s European and Dublin connections. Kathleen made a wonderful pie filled with tender, well seasoned eggplant, capsicum and olives stuffed within a homemade buttery short crust pastry. I don’t like making pastry and always admire anyone who does it well. And there was garlic bread too, followed by the Guinness Chocolate Cake, cherries and cream.

When I browsed the Guiness Chocolate cake recipes on the web, I was interested to see that both Nigella and Delia have published recipes for this cake which shows it is quite trendy. Quite a lot of recipes had sour cream but I opted for a dairy free recipe I wrote down years ago – I think it was from The Age newspaper.

Every recipe I found had cocoa rather than chocolate, but once I started following the recipe, I understood why. The chocolate and cocoa are mixed together to form a pleasing sludge – it was so like mud, it made me want to step in it barefoot and feel it ooze between my toes! Instead I was adult and used it to make the cake dark and rich. My cake wasn’t quite cooked in the centre 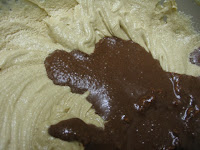 but the goo was enjoyable. It is that sort of rich moist cake – although it is a rich version of a butter cake rather than decadent in the fashion of a mud cake or flourless chocolate cake.

I toyed with the idea of a white chocolate ganache to imitate the frothy head of the Guinness. Nigella did hers with a cream cheese frosting. But I felt it was rich enough without icing and had some new icing stencils to test out. The icing sugar stars looked great and the cherries and cream were a pleasing accompaniment.

Cream butter and sugar in medium bowl. Add eggs one at a time, beating after each addition. The recipe says to sift flour, baking powder and baking soda together three times but I never sift flour if I can help it.

Mix together Guinness and cocoa in a separate small bowl or jug. It makes a wonderful muddy sludge. The recipe says it might foam a lot so I was a bit disappointed not to get much foam. Add this mixture to the butter and sugar mixture alternatively with the flour. The mixture will be quite moist and light..

Bake in oven 45 minutes or til a skewer comes out cleanly. Cool in tin 5 minutes before turning out onto a wire rack to cool. It is a moist cake that can be served dusted with icing sugar, with cream and shaved chocolate or with a chocolate ganache. (Nigella even does a cream cheese frosting).

On the Stereo:
Sound of White: Missy Higgins
Posted by Johanna GGG at 21:28