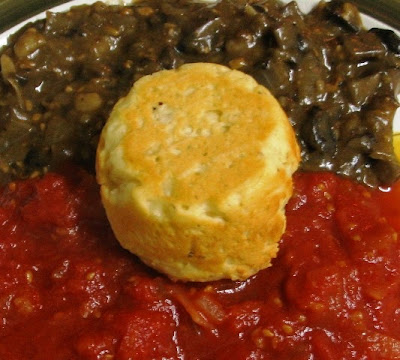 Sunday was the start of Reconciliation Week which is celebrated in Australia each year. According to Reconciliation Australia, reconciliation is about recognizing the special place and culture of Aboriginal and Torres Strait Islander peoples; about justice recognition and healing; and about understanding our past. Sunday was also the 40th anniversary of the 1967 referendum.

This is not the place for long political rants, suffice to say it is a crying shame that Australia’s Aboriginal and Torres Strait Islander peoples suffer such disadvantage. But I would also like to acknowledge that I am very lucky to work alongside many wonderful and talented Indigenous people and learn from the good work being done to redress the inequalities.

Regrettably, I have been too busy blogging and baking to be out on the streets marching but when I arranged for my dad to come to dinner tonight, I decided it was a perfect opportunity for a Reconciliation dinner as a nod to a special week. But what to make?

I had buttermilk leftover that I forgot to put into my seed bread. A quick flick through my recipe books gave me an idea of making cornbread. The lovely yellow of cornbread made me think of the Aboriginal flag and I thought I could do cornmeal muffins to represent the yellow circle. But then cornbread didn’t seem Australian. So I hit upon damper which is quintessentially Australian and part of my childhood.

When I was young we would drive to Angahook Forest Park near Lorne for barbeques. These weren’t the type where you would put a coin in a slot and start cooking. No. These barbies required mum and dad sending off the kids to find kindling to get the fire going. We had sausages in soft white bread smothered in tomato sauce, and mum would make damper by mixing flour and milk (or was it water?) and stick it in the fire so it got all burnt outside and soft and fluffy inside. Tea was made in a billycan. We shared our food with the kookaburras and then went on a bushwalk.

So I decided that I would do damper, sausages and tomato sauce – or to use some great aussie slang – damper, snags and dead horse! Sausages was a little challenging. I decided I could serve it so that the sausage mix (with gravy) represented the black top of the flag and the tomato represented the red bottom of the flag. But it wasn’t just about me. It was about bringing together my life with our Indigenous culture, so I thought I would hunt down some Indigenous Australian spice and herbs.

I know I have seen Indigenous spices recently but, once I started looking, they were nowhere to be found. On a rainy windy Tuesday lunchtime I rode my bike to the Vic Market where I found only one product – Tony’s Own Organic Lemon Myrtle Sprinkle and Rub. It was 80% salt so I thought I would keep searching. I rode on to the upmarket David Jones foodhall and there again only found one ingredient – Enspice Bush Spice BBQ Rub. It was a beautiful bottle, albeit not functional. The spices (bush tomato, pepperberry, paprika, garlic salt and basil) were layered but it assumed they would be used in one go on a huge lump of meat – I had to tip them out, mix them and tip them back in the bottle. I wasn’t really after herb and spice mixes but with a lack of choice, I bought it and returned to Vic Market for the Lemon Myrtle mix. Oh that I would be organized enough to order from the net!

Now as this is my entry for Weekend Herb Blogging hosted by Kalyn's Kitchen, I looked up lemon myrtle and found it was indeed an Indigenous herb of Australia. In addition to a strong lemon scent, it has antimicrobial properties and is one of the best known bush tucker foods. Although it was ‘named’ in 1853, Indigenous people have long used it for healing properties and in their cooking. More bizarrely, it was used to flavour commercial lemonade in Australia during World War II. I decided to use it to spice up my damper.

One of my recent cookbook purchases is Vegan with a Vengeance and I have been eyeing off the recipe for sausage crumbles which, coupled with gravy, would form the top of my flag. So I started this last night and instead of using the spices recommended by Isa, I used my bush spice bbq rub. I know better than to wantonly toss in large tablespoonfuls of an unknown mix of spice, but I still went right ahead. So, late last night, I was in crisis mode about how salty and spicy and uncrunchy the sausage crumbles were. Luckily I had just started my dark mushroom gravy when I tasted the crumbles, so I was very light on with any seasonings.

Tonight I only added under half my sausage crumbles to the mushroom sauce and it was just right – dark and mysterious with the pinquant bouquet of bush spices. I made a very light and very red tomato sauce. I searched the net for inspiration for damper recipes and came across a 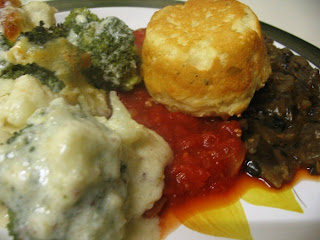 simple one to adapt to my needs. My memory of my mum’s damper was the simplicity so I rejected all recipes with egg, butter, beer. Pumpkin was tempting to get the yellow colour but in the end I decided on saffron. It is such an easy recipe I am determined to make it again.

I also decided to make an cauliflower and broccoli gratin (by covering the steamed veggies with a white sauce topped with cheese and breadcrumbs and baking in hot oven about 30 minutes). I thought if my dad was uneasy with vegetarian sausage he would be comforted by my version of cauliflower cheese. It is a dish that my mum makes regularly – in fact as I child she often made large batches so we could take some, in a small dish, to our neighbour two doors up.

And my dad loves dessert. I despaired that, after weeks of baking, I had no homemade baked goods hanging around. Then inspiration hit when I remembered I had cream in the fridge. I decided to use the leftover damper as a bush scones with jam and cream. Dinner was a success both in remembering reconciliation week and thinking of my mum during her travels in Ireland and Scotland. Here’s what I did:

To make the sausage crumbles, choose a large frypan (mine was non-stick but it still left a veneer of mixture on it). Crumble the tempeh with your hands into frying pan – add water to almost cover and simmer on medium heat about 15 minutes til almost all water evaporated. Mix remaining ingredients and add. Fry, stirring frequently. I did this on medium heat about 30 mins hoping it would crisp up but it didn’t so next time I would do it for less time – although I quite liked it drying out a lot as a seasoning.

While the crumbles are frying, make the gravy. In a medium saucepan, fry onion on medium to low heat in oil til brown – about 10-15 minutes. Add garlic and mushrooms for another 10-15 minutes. Stir in flour and cook about 2 minutes. Add water gradually and promite and port (these are what are available in my kitchen). Heat, stirring frequently til mixture thickens.

To serve, mix crumbles into gravy.

Boil about an inch of water in a medium saucepan with onion in it. Simmer about 5-10 minutes til onion softening. Add remaining ingredients and simmer on low heat, covered til thickens – 30-40 minutes.

If using, soak saffron in 2 tbsp hot water for about 30 minutes. Mix all ingredients. Spoon batter into greased muffin pan. Bake in 220ºC oven about 20-25 minutes. It took mine 25 minutes but most of the time they were at the bottom of the oven so probably could be quicker.

On the Stereo:
Born Sandy Devotional: The Triffids
3 June 2007 - PS After my searching in the wrong places, I found a good source of bush spices today at Flinders Organics in the Oz Tukka range. Their website gives excellent advice on the herbs and spices as well as recipe suggestions.
Posted by Johanna GGG at 00:17