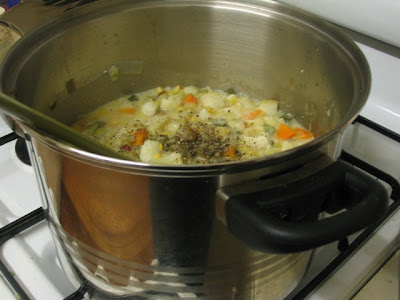 Soup is the solution! Soup is the answer! Soup is subliminal! I usually make a big stockpot full of soup about once a fortnight and put it in the freezer in little tubs. Each weekday morning I put one in my bag and at lunchtime I microwave it. It prevents me having boring sandwiches. It helps me get more vegetables into my diet. It makes preparing lunch on a workday morning a breeze.

My two favourite soups to make are pumpkin and spinach, and usually I load them with other veggies like onion, celery, carrot, potato, cauliflower. I put in most anything that takes my fancy. But the trick to having soup every day is to vary it every now and again so it keeps your interest.

On Monday night I made soup for the first time in ages. I had a half cauliflower and decided not to puree it but to have chunks of veggies and a little fruit and cheese in it too! Pears added interesting texture but blended in well with its vegetable friends. Dried cranberries were sweet explosions of fruit and colourful jewels in the soup. I also put in a tin of creamed corn. This is something I searched for in UK with no luck – it is corn blended with sugar, salt and starch which is a thickener and adds heaps of flavour to a soup. I don’t know if you can find it in the US but in the UK, you might have to substitute a tin of corn and some extra seasoning. 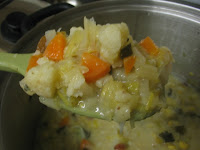 chowders. I am not keen on really milky chowders but I like the name chowder – it sounds chunky and satisfying and reminds me of a song we used to sing in primary school with the ABC Radio Let’s Sing program called Mrs Murphy’s Chowder that had silly lines like ‘it was tuneful, every spoonful made you yodel louder’ and ‘Uncle Ben used to fill his fountain pen with a bowl of Mrs Murphy’s chowder’. Classic stuff!

Put about an inch of water into a large stockpot, along with onion, carrot, potato and garlic. Bring to boil and simmer about 10-20 minutes, stirring occasionally til onion starting to soften. (It is forgiving if you have a phone conversation that keeps you longer than you expected). Add leek, cabbage and water and simmer another 15 minutes. Add cauliflower, stock powder, and mustard. Simmer about 20 minutes. Add pears, cranberries and creamed corn. Simmer an additional 5-7 minutes. Turn off the heat. Add pepper and cream cheese. Tastes good the next day – don’t worry if the pears aren’t quick soft – they still taste good (but not too sweet) in the soup.

On the Stereo:
The Man in Black: 22 Greatest Hits: Johnny Cash
Posted by Johanna GGG at 08:18