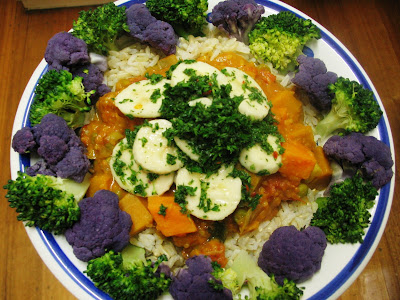 Recently I came across an announcement on Should You Eat That about a newish regular blog event called They Go Really Well Together (TGRWT). It aims to get people pairing unusual flavours that are strangely complementary bedfellows. This month is banana and parsley – you can see the science here. This combination made a lot of sense to me. So I decided it was time for my first blog event.

It not only made sense, but it drove me back to recipes that have been lingering at the back of my mind. I think I might like blog events for giving me a kick-start to stop dreaming and start cooking! This event sparked of thoughts of combining banana with a peanut soup/curry.

When I searched my recipe books I found no less than 3 versions of the recipe I had in mind so didn’t even bother muddying the waters with more recipes from the web. One was the Curried Peanut Soup recipe from Mollie Katzen’s Enchanted Broccoli Forest. I also had two handwritten unsourced recipes for African Peanut Sauce and East African Sweet Pea Soup.

Sometimes I think my cooking style has magpie tendencies when I tend to pick sparking gems from various recipes and create my own thing. My only complaint about cooking this way is the inconvenience of flitting from cookbook to cookbook, and trying not to leave out vital ingredients. It would be nice to be organised and write out the recipe I will make before I do it, but my recipes evolve a bit more organically than that.

In Mollie’s recipe the banana was fried with cinnamon, sesame seeds, lemon and tumeric which I may try with the leftovers. Another recipe had mashed banana in the recipe. But I was inspired by Eat’N Veg’N who had a photo of banana with tacos rice and salsa. I wanted the banana quite plain with the parsley featuring. I wanted peanut butter (mmmm), interesting spices and apricot nectar. E wanted a sauce over rice rather than a soup (and my soups are often like stews anyway). It has occurred to me tahini might be good in this recipe too – maybe next time.

Of course there had to be lots of veggies and colour. I was in Pedimontes this week and fell in 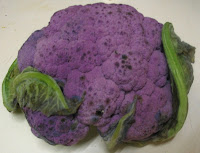 love with a purple cauliflower. You might have noticed that I love green – my other colour I love is purple (yep the feminist colours!). Green veggies are easy but purple is harder to find. These caulis were spectacular – even the few spots going a little mouldy were a beautiful bruise of blue so I didn’t mind that so much.

And a quick word on the name. As the actual dominant flavours are nuts and bananas, it occurred to me that these are words used to indicate someone is crazy in popular speech – and some might think the combination of flavours a little crazy anyway. Those of you who are Chaser fans should try and imagine the Super Spruiker saying the title of the blog entry!

This was fantastic. I am not a huge fan of bananas by themselves but I love the way fruit can lift a savoury meal. In this recipes the sweetness of bananas, the freshness of the parsley and the tartness of the lemon were a perfect foil for the rich nuttiness of the stew. E said it was an outstanding meal and ate my leftovers when I was too full to finish. Here is what I did: 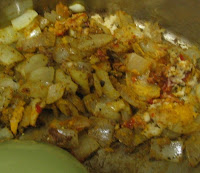 In a large saucepan, fry onion in oil on low-medium heat about 5 minutes. Add spices and fry an additional 2 minutes, stirring frequently. Add remaining ingredients, bring to boil and simmer for approximately 20-30 minutes til pumpkin and sweet potato are soft. You will need to stir occasionally as it tends to stick to the bottom of the pan.

While stew is simmering, prepare salsa by mixing all ingredients.

Serve stew on brown rice and some steamed green vegetables such a broccoli or Brussels sprouts. Top with banana parsley salsa.

On the Stereo:
Hatful of Hollow: The Smiths
Posted by Johanna GGG at 11:41