Waiter waiter there’s a shark in my chilli non carne

I love Nachos but they seem to be too much corn chips and not enough veg and can leave you feeling a bit stuffed full of the wrong thing.

Then then week I came across a tortilla casserole on www.cooksrecipes.com which had toasted tortillas broken up and baked in a casserole of Chilli Non Carne. 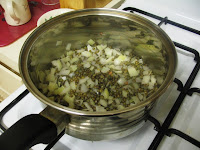 [Quick Diversion: I can’t take credit for the vegetarianising of the name – I recently came across it at - Domestic Affair blog and it seems so obvious I can’t believe I had to be told. I know it gets called ‘chilli’ in the States but this seems as confusing to me as calling capsicums ‘peppers’ in the UK. So I will stick to Chilli Non Carne.]

I occasionally do tortillas stacked with Chilli Non Carne between the layers but this new idea appealed to me because the tortillas seemed to be crisp in the recipe. But I decided that instead of burying all of them in the casserole, I wanted both soggy tortillas inside and crisp tortillas with cheese on top - just like nachos but will lots of veg and beans.

I lay awake at night envisaging the tortillas sticking up looking like shark fins and tool pleasure in the image of tiny sharks circling in my dinner. As is often the case, the tortillas weren’t as crisp as I thought they might be and they didn’t really stick up (as you can see in my photo). I am going to make this again and maybe will do it with crisp taco shells or even my fave green corn chips (but then would it just be nachos with lots of Chilli Non Carne???)

Here is my version of the recipe with my bog standard version of Chilli Non Carne. I usually try to make it with a protein in addition to the kidney beans. Yesterday I found some French lentils which I don’t think I have used before – they had a pleasing dark mysterious look to them which was what I was looking for. I was a bit unsure how long they needed for cooking which is probably why I cooked the Chilli Non Carne for longer than usual. I served it last night with lots of vegetables, guacamole and yoghurt. Delish! 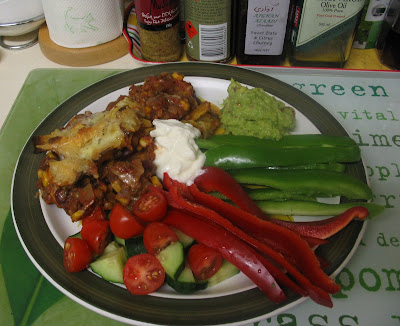 Bake tortillas in on wire oven racks for 10 mins at 180ºC or til crisp. (mine started to get quite brown around the edges but were still soft in the middle when I took them out, so ‘crisp’ is just an ideal to strive towards).

Pour about 1 cm of water into largish saucepan and boil – add onion and cook for 5 minutes on medium heat. Add puy lentils and cook a further 5 mins. Add remaining ingredients (except cheese). Cover and bring to boil. Cook, with lid on, on low heat for about 30 mins, (or less if you aren’t waiting for lentils to cook). Stir occasionally. It is ready when it thickens slightly. Check seasoning.

Break tortillas into pieces. Pour about half bean mixture into casserole dish, and sprinkle tortilla pieces on it. Cover with remaining bean mixture. Scatter with tortilla pieces and cheese. I gave a good grind of pepper over this (probably because it reminds me of how classy my mum’s cheese on toast looked with pepper on it when I was young and thought pepper very grown up.)

Bake at 230ºC for 15 mins – I baked it at a high temperature because I like my cheese quite nicely browned.

We ate the leftovers tonight, so this photo is of its second night with roasted fennel, zucchini, mushrooms, corn on the cob and a simple salad of tomato, cucumber and baby spinach with lime juice. (Still not quite sure about the fennel but will keep trying it out!)

On the Stereo:
Ultra Lounge: Various Artists
Posted by Johanna GGG at 10:21