Or the long title of tonight’s entry is:
‘There’s nothing I like better than to stir sprouts pickled in Cointreau,’ said E when I asked him to give them a stir, but he wasn’t so sure about my vegan cheese pasta sauce.

Tonight I have been inspired – firstly by Lucy at Nourish Me for sharing her fab recipe for Brussels Sprouts in Cointreau. It just seemed like the right thing to do to brussels sprouts. I hated them a child and not even honey could disguise their awful taste, though my mother tried. Now I love them and usually have them steamed au naturel, but this recipe seemed to reach out to me with its enticing use of one of the few liqueurs in my cupboard. 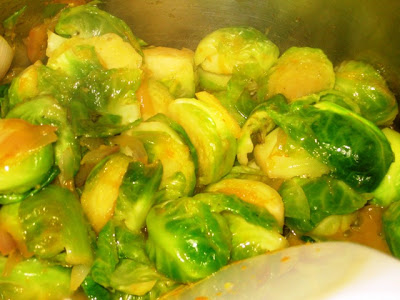 Lucy used spring onions and fresh ginger and parsley but I adapted it to what was in the fridge (red onion) and what would suit my meal (chilli flakes). Here is the version I used:

- 400g of Brussels sprouts
- ½ red onion thinly sliced
- 1 tablespoon of light olive oil
- Zest and juice of 1 orange
- ½ teaspoon of sugar
- 1 tablespoon of Cointreau (or similar orange liqueur)
- Generous sprinkle of chilli flakes, salt and garlic flakes (or fresh garlic if you don’t have these all in a grinder like mine)

Trim base and blemished leaves off brussels sprouts and halve each sprout (admittedly I might have quartered them if I had read Lucy’s recipe properly).

Heat oil on medium high in heavy based frying pan or large saucepan. Add sprouts and orange zest and stir fry about 2 minutes. Add orange juice and continue to fry another 2 or 3 minutes til juice is almost evaporated.

Add Cointreau, sugar and a generous sprinkle of chilli flakes, salt and garlic flakes and continue to stir over medium heat another 2 – 4 minutes. 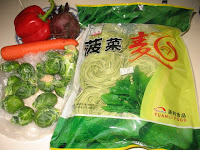 Inspiration number 2 tonight was some green noodles which I had bought at the Asian grocer by the Vic Market. I found them in the cupboard last night and wanted to use them.

Recently I made my first vegan cheese sauce and was inspired as I am not a big fan of heavy dairy sauces and thought this one with carrot and tofu was great. So tonight I tried another which was a bit of a store cupboard ingredients recipe. It was very heavy and not a hit with E.

I think my choice of noodles was perhaps wrong as they were very light and flaccid whereas I think my sauce needed more robust Italian pasta and perhaps a little less salt (despite reducing both the salt and yeast from the original recipe). I will continue trying vegan cheese sauces to find which are the best for us – there are just so many exciting options. Here is the one I did tonight:

Blend all ingredients – I was delighted to find I could do this in a bowl with my hand held blender rather than have to use the food processor. Then heat on medium heat until thickened.

The recipe suggests only using the arrowroot or cornstarch if you want it thick and chill it overnight so it is set solid for slicing. Omit if you want a cheese sauce.

I added grated zucchini, parsley and baby spinach and added the sauce to the green noodles in an attempt to have it looking really green but it was but a pale imitation of the colour I aspired to.

I served my pasta with the sprouts which were delisciously sweet and caramelized with a hint of cointreau (highly recommended) and a simple fresh earthy salad of grated carrot, grated beetroot, finely chopped red pepper and raspberry vinegar. 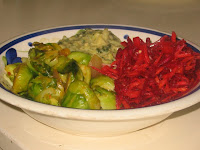 supermarket. Why is it that a trip to the supermarket for a bike light battery ends up with me having too much stuff to carry home on my bike and, yet, still no battery? Maybe the universe was ensuring I had my beetroot (and my orange for the sprouts).

The pasta with cheese sauce was a bit overwhelmingly rich and salty – alone it would have been a disaster even with veggies in the sauce. But it was nicely complemented by the side vegetables. And despite not finding the green I desired, I was still pleased with the colours.

On the Stereo:
Altered Realities: Erdem Helvacioglu
Posted by Johanna GGG at 23:30