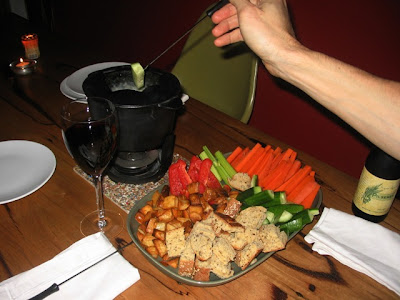 On Sunday night I had the pleasure of cooking with my friend Yarrow in his (and Mindy's) brand spanking new kitchen. He is an ex-housemate and co-conspirator in many extravagant cooking experiences (thanks to his flair and vision in the kitchen). On Sunday he wanted to make fondu and I wanted to bake bread, and I left him to choose a dessert. Sounded easy! As always tasted great but we could have had more time!

Yarrow bakes bread more frequently than me so it is reassuring to bake with him and learn from his experiences. The bread I wanted to make was a Buttermilk and Seed Bread which I found in a search for flax seed recipes. I had seen flax seed in a lot of recipes recently and bought some out of curiosity, in the process discovering that it is linseed here in Australia.

As always, we meddled a little with the recipe to suit our needs. I was forgetful and neglected to bring over the buttermilk I purchased especially for the recipe. Yarrow substituted molasses for sugar and we couldn't be bothered toasting the wheatgerm. We also didn't have quite as much wholemeal flour as the recipe required.

The recipe produced a soft moist dough and didn't rise quite as much as seemed necessary (and as we wanted to eat at a reasonable hour, we didn't have the luxury of time). After the second rise, Yarrow put it in the hot oven and sprayed water into the oven to help it rise. Despite being a little under proofed, it baked up into a lovely dense seedy loaf. The middle was a little moist but Next time I will try it with buttermilk and have more time on hand.

It was a great bread to have with the fondu as it was dense enough to work with the rich cheesy sauce. We had lots of nice veggies to dip as well. And then a wait til dessert was ready.

Given the stodge of bread and cheese, we agreed a lighter meal than a cake might be wise. Yarrow presented me with his choice of Chocolate Concord: a dark chocolate mousse sandwiched between chocolate meringue layers and served with an orange ice-cream. I am not sure it was much lighter than a cake and I am not a great lover of eggs but I will always try a new chocolate dessert – especially one with such a great name.

This decadent dessert was not something to be quickly whipped up. We started straight after the bread starting it’s first rise but we really needed more time. It required long periods of patience. The meringue baked over an hour, the mousse had to sit in the fridge and then the compiled loaf was to sit for 4 hours but we waited just as long as it took the ice-cream to freeze enough for serving. The creamy rich mousse, chewy sweet meringue and cold slightly tart ice-cream created a pleasing meeting of tastes and textures.

In a small bowl, dissolve the yeast and sugar in the warm water. Let stand about 10 minutes until creamy.

Combine buttermilk or milk, butter or margarine, honey and the yeast mixture in a large bowl. Add the salt, all of the seeds, the wholemeal flour and wheat germ. Stir to combine. Add the bread flour, 1/2 cup at a time, mixing well with a wooden spoon after each addition.

When the dough has pulled together, turn it out onto a lightly floured surface and knead about 6 minutes until smooth and elastic.

Lightly oil a large mixing bowl, place the dough in the bowl and turn to coat with the oil.

Cover with a damp cloth and put in a warm place to rise until doubled in volume, about 1 hour.

Preheat oven to 375 degrees F. The recipe suggested greasing two 9x5 inch loaf pans, but we used one large pan and scattered some extra sesame seeds along the bottom of the pan.

Punch down the dough and turn it out onto a lightly floured surface. Form loaf and place in prepared pan. Cover with a damp cloth and let rise until doubled in volume, about 40 minutes.

Bake for about 30 minutes or until the tops are brown and the bottom of a loaf sounds hollow when tapped.

On the Stereo:
Red Hot and Blue: a Tribute to Cole Porter - Various Artists
Posted by Johanna GGG at 18:55