Cake for the absent bride and groom 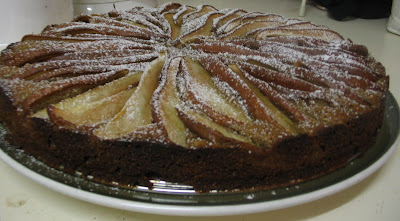 My sister Chris married Fergal yesterday in Dublin. I had decided it would be nice to mark the occasion back in Melbourne by baking a cake in their honour (any excuse to bake a cake!), so when Nicki G invited me to dinner I offered to do dessert.

A celebration cake to me should always include chocolate. However, Nicki isn’t a chocolate person so when I saw a Pear and Spice Cake posted recently by Lucy it seemed suitably impressive. But I had also seen a recipe on The Well Seasoned Cook for Gingerbread Muffins which I wanted to try but am not in muffin making mode at the moment. What really interested me was her addition of black pepper like in pfeffernüsse. So I did a little tinkering with Lucy’s recipe to make it even spicier. I figured this would make it richer but that was ok for a celebration cake.

Then I remembered Scottish Vegan’s Notella which I had been curious to try out. This is a vegan and much improved version of the chocolate hazelnut spread we know as Nutella. Scottish Vegan had served it as a sauce so I realised Nicki could have her cake and I could have my chocolate. 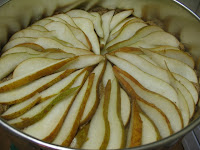 The cake has sliced pears on top which looks spectacular. Another friend at dinner, Will, declared it was the most attractive cake I had ever made. I have to agree. How could such an easy cake look so good! And it tasted great too. Very dense and intense. The texture is moist and grainy but this seems to complement the pears well. With the warmed glossy dark notella sauce and cream it was fantastically rich.

By the end of the meal I was full as a state school! Nicki made a great family fondu recipe of gruyere, emmanthal, wine, kirsch, nutmeg and other wonderful flavours. We had fun dipping bread, mushrooms, cauliflower and okra in it. I had never had okra before and found it more pleasant than I expected – green and cooked so slightly it retained a crispness but seemed to go a little bruised, hairy and slimy as it sat after we had finished. (No photos unfortunately but Nicki did prompt me to find the close-up button on my camera so hopefully this will improve my photography.)

And a bottle of Australian sparkling wine to toast the absent bride and groom. Congratulations Chris and Fergal!

Here are my recipes with my variations (some of which are due to me not reading the recipes – oops). 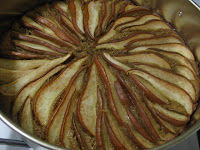 Adapted from Nourish Me

Preheat the oven to 160ºC. Grease and line a 25cm spring form round cake tin. (Lucy suggests you can do a smaller pan but I liked the cake being quite thin).

In a medium bowl, beat the butter and sugar together until pale and creamy. Add the eggs, one at a time, beating well after each addition. Add the yoghurt, vanilla and molasses and mix well.

Fold in the dry ingredients until well mixed. Spoon into the prepared spring form tin and smooth the mixture with a spatula. Arrange the pear slices on top as artfully as you like. (Lucy sprinkled sugar on top before baking but I missed this bit - might try it another time.) Bake for 45-60 minutes, or until a skewer inserted into the cake comes away clean. (I found 160ºC was too low – perhaps it was intended for a fan forced oven, so after 30 minutes I turned it up to 180ºC and left it in the oven for another 30 minutes).

When the cake is cooked, I sprinkled with icing sugar and served it from the base of the spring form tin. 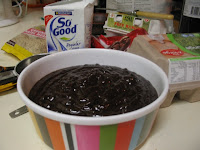 a small saucepan over a medium high heat and bring to boil, stirring frequently. Once sugar has melted add cornflour mixture and continue to stir until it thickens slightly. Add chocolate chips and stir until melted. Remove from heat and add ground hazelnuts. Can be served warm or refridgerated as a paste/spread.

On the Stereo:
Boy Child: Scott Walker
Posted by Johanna GGG at 10:26