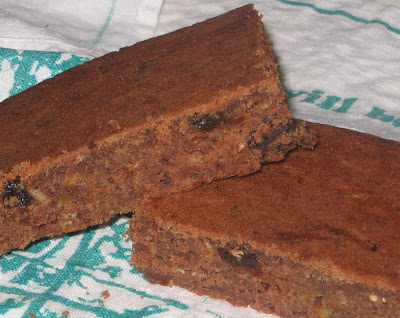 When I was a student, the university’s food co-op regularly sold a vegan chocolate cake that was very popular and I managed to a get a recipe which I made occasionally but it now seems a bit plain for my liking.

Lately I have made a few chocolate cakes with various flavours that have appealed to me so I was excited to find a vegan cake (The New Carob Chai Cake) on Domestic Affair which had an interesting blend of spices and maple syrup.

Now I am not usually one to meddle with cake recipes because I am afraid of upsetting the science. But I made the excellent Store Cupboard Chocolate Orange Cake from Nigella Lawson’s How to be a Domestic Goddess late last year with marmalade which has two consequences. One – I have never been a big fan of marmalade and so we still had almost half a jar of marmalade in the cupboard. Two – despite not using marmalade on toast, I am now a fan of putting it in cakes to give an orange flavour.

I decided to use marmalade instead of some of maple syrup which was fortunate, seeing my maple syrup was running low. So once I had started to meddle, there was no end to my tinkering. I worried the cake wasn’t sweet enough and found an opened packet of prunes to add, and then I remembered I also had some oatmeal to use up, and some flax seed I bought recently that I wanted to try out. And I have never understood carob so I used cocoa.

One thing I did stick to was adding the cardamom (despite the suggestion of substituting cloves, with which I am more familiar). Cardamom is a spice I have not really used before but when E and I smelt the new jar of it, it gave off a pleasing fragrance that seemed the stuff of nostalgia. I am not sure if the aroma brought back elusive memories or just smelt so good it seemed to create the impression.

I was reminded of the old food co-op vegan chocolate cake with the thin batter. And I confess I didn’t read the recipe well and put the vinegar in with the wet ingredients rather than at the end. My cake seemed a bit flat which may have been my oversight with the vinegar but possibly was due to using a 22cm square tin which I think is a bit bigger than the tin used in the recipe. Also I am not so interested in icing so don’t always ice cakes which doesn’t help with presentation – you should see the pretty cake on Domestic Affair if you want to see how lovely it can look.

It may not look great but it tasted fantastic, albeit a very moist cake. I love the combination of 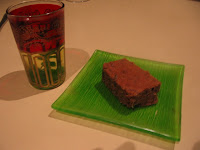 chocolate, spices and orange. I took it to work for lunch, to my mum’s for dinner, to a picnic and even to the cinema. One of the kids who tasted it was not keen so it might not be a favourite with everyone, but I am still recommending it if you want something a little different. Below is the recipe I used:

Place dry ingredients in a large bowl. Mix wet ingredients (except vinegar). When all ingredients are combined, add vinegar til evenly distributed. The batter will be quite thin.

Pour batter into cake tin and bake about 30 minutes or til a skewer comes out cleanly. Ice with spiced frosting or dust with icing sugar. Serve warm or cold.

On the Stereo:
Map of Hands: Seaworthy
Posted by Johanna GGG at 23:36