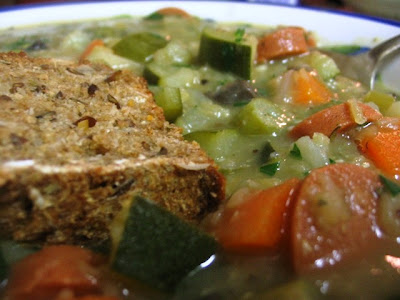 Melbourne is well and truly into winter. Outside the air is crisp and the ground is damp. Inside the heater and lights burn warmly. It feels like the sort of weather in which I should have a bowl of bread dough rising and a large pot of stew simmering during the day. Life isn’t quite that idyllic but I did manage to produce bread and soup for dinner tonight.

I bought a large bag of bread flour for hot cross buns at easter, and I am determined to bake my way through it. I am quite enthused by the bread recipes in Nigella’s How to Be a Domestic Goddess. There are lots that I want to try and today chose the Norwegian Mountain Loaf. 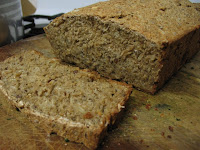 Nigella describes it as ‘a nubbly Northern European bread’ which is ‘dense and virtuously substantial’. And, as if that isn’t recommendation enough, it is an unusual loaf that has yeast but has no kneading and no rising. Plus I had all the ingredients in my pantry.

I had meant to spend the day baking but one thing and another meant I didn’t start on this til 7pm so this recipe was perfect – it was merely a matter of mixing all the ingredients and putting it in the oven. My monster bag of bread flour is white so I couldn’t put in all wholemeal flour and had to do a mix of white and wholemeal. Nevertheless, the bread was indeed nubbly with lots of grains and a thick chewy crust. My main complaint is that it is a bit too salty so I have reduced it from it from 1 tbsp to 1 tsp in the recipe below.

The soup I decided to make was a German lentil soup with veggie frankfurters that I recently saw on Scottish Vegan’s pages, which I tracked back to this recipe. I love a nice hearty soup with lentils or split peas and lots of chunky vegetables. Every now and again I see soup recipes with german sausage in them that I wish to vegetarianise. I have never thought of trying Not Dogs (as I call Vegetarian Hot Dogs). In fact I have never tried Not Dogs but I do like vegetarian sausages, so thought I would give it a go. I couldn’t resist filling the soup with lots of veggies th 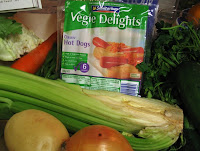 at had been hanging around the fridge too long. The Not Dogs worked well in the soup. They added interesting texture and excellent colour to the soup. I found it needed all the salt in the recipe but wonder if stock or stock powder might not have been better, as the salt was needed by something else was lacking.

It wasn’t a quick meal but we were able to wait tonight. The soup and bread were a substantial and satisfying combination that brought just the warmth we needed on a cold winter’s day.

Mix water and milk in a jug. Mix remaining ingredients in a large bowl and add liquid, stirring to make a sticky porridge-like dough. Scrape into a greased loaf tin and put in a cold oven. Turn oven on to 110ºC and bake 30 minutes. Then turn oven up to 180ºC and bake approximately one hour. You will be able to tell it is cooked when a skewer comes out cleanly and the bottom sounds hollow when tapped. If not, return to oven for 10-15 minutes. 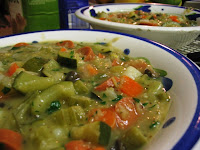 In a stockpot, heat oil. Add vegetables as you chop them in this order - onions, carrot, celery, cabbage, potato, mushrooms, garlic. This will take about 20 minutes.

Add thinly sliced veggie frankfurters and cook for another 10 minutes. Remove and discard the bay leaf. Remove from the heat and stir in cider vinegar and parsley.

On the Stereo
Tangerine Dream (E’s album is so cheap it has no title but is released by Disky 1999)
Posted by Johanna GGG at 00:01