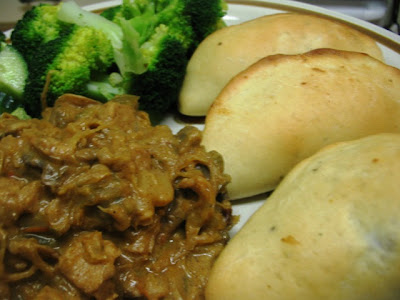 I like the way one recipe leads to another. I make one meal and the clue to my next is buried within it. It is like that favourite line of TS Eliot – ‘in my beginning is my end’. There are many connections between meals – both with ingredients I have leftover from previous meals and reminders of past meals that inspire the present.

My continuum ingredient today was sauerkraut. I baked some chocolate cupcakes earlier in the week with sauerkraut and used only a fraction of what was contained in the tin. This is not an ingredient I use often. In fact, a comment from Lucy reminded me that it seems more the stuff of history – being used by none other than Captain James Cook in the eighteenth century to prevent his sailors getting scurvy because it is high in vitamin C. So how to use it? Lucy kindly suggested serving it on rye bread with sauerkraut and avocado, which I might try with my nubbly bread of last night. But that would take weeks of sandwiches. So what else?

I consulted my cookbook collection. There are many cookbooks on my shelves, and they reflect various times in my life. I have one called the Perennial Political Palate: the 3rd Vegetarian Cookbook by the Bloodroot Collective which I think I was given soon after its publication date of 1993. I have never cooked from it before but could not get rid of it because I felt I had to have at least one Feminist Vegetarian Cookbook in my collection. Many of my cookbooks did not even mention sauerkraut in the index but the Bloodroot had a few recipes. Finally its time had come.

I chose a recipe with the wonderful name Szekely Gulyas with Potato Dumplings. The book suggested serving them with Cabbage Strudel and Cucumber Salad. I went to the supermarket yesterday to buy all the ingredients I needed. Then at the last moment I realised I’d forgotten the filo pastry for the strudel. No problem. I decided I could make some sort of pastry.

Another sauerkraut recipe I had considered was the Pierogi that my ex-housemate, Will, used 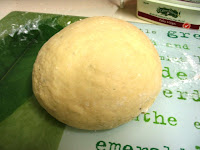 to make every now and again as a treat. He got it from his ex-girlfriend’s family and he could only do it when he had lots of time to spend in the kitchen. It was always time well spent as they were delicious. I have a copy of the recipe but had never made it. One recipe with sauerkraut seemed enough but I thought that maybe I could use the yeasted dough which was baked in the oven with a tart filling and produced plump little pillows of pleasure. I have never seen the exact recipe elsewhere. When I discovered a little café in my travels in Krakow, Poland, that sold pierogi I was quite excited but they were boiled not baked, and were just not the same. I think ‘pierogi’ might be polish for dumpling. I have had my eye on a recipe for Red Cabbage, Walnut and Blue Cheese Empanadas, and thought the filling might replace Will’s pierogi filling nicely, even though I had savoy cabbage rather than red.

Now I can only do such extravagant cooking on a long weekend when I have plenty of time. I knew the pierogi dough would take forever but I thought I could bash out the filling and the stew fairly easily. If I had read the recipes I would have known otherwise. The directions for the red cabbage filling said to simmer for an hour, and the stew was to take almost as long. I decided the pierogi were like dumplings and cut out the potato dumplings. The cucumber salad became just cucumber and broccoli with lemon juice squeezed over it.

Nevertheless dinner was late again. But it worked ok, despite my heavy handed ways with smoked paprika (wow, that is strong stuff!), the stew threatening to burn to the bottom of the 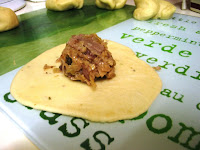 saucepan, the pierogi not sticking together properly (have to ask Will about that) and the blue cheese melting into the pierogi filling. Despite these problems it tasted lovely. The stew was quite strong (almost bitter) tasting with the smoked paprika and soy but it was nicely complimented by the sweet sourness of the pierogi filling – the blue cheese cut across the sweetness but it was hard to taste the walnuts. I think a vinegary cucumber salad might have also gone down well. Maybe I will try that with leftovers tomorrow.

Pierogi filled with Cabbage, Walnuts and Blue Cheese
(serves approx 6 – I had some filling left over)

Dissolve yeast in warm water and leave 10 minutes. Meanwhile beat eggs with melted butter in a large bowl. (The recipe says it should get thick and fluffy – I used a whisk, then I used electric beaters and it was still thin and watery so I gave up on that.)

Add yeast to egg mixture. Beat in sour cream and sugar. Stir in flour, 1 cup at a time. The dough should be firm but not stiff. Turn out onto floured surface and knead 3 minutes til it is smooth and soft. Place dough in greased bowl and cover with clingwrap. Place in a warm area and let rise til doubled – this should be 1½ - 2 hours. 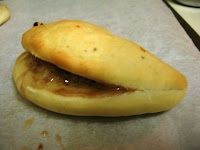 into a circle. The recipe directs to roll the dough out to ⅜ inch thickness and cut into 3 inch circles. Place a spoonful of the filling on each circle. Dampen the edges, fold dough over the mixture and seal. I find it hard to seal the dough and when it cooked it did not have seemed to have worked despite using water to dampen it and then pinching it together.

Put all ingredients (except cheese and walnuts) in a large saucepan. Boil and bring to simmer. Simmer uncovered about an hour, or til cabbage is tender. Cool (if you have time) and drain. Add cheese and walnuts and stir through.

On the Stereo:
Must I Paint You a Picture: the Essential Billy Bragg: Billy Bragg
Posted by Johanna GGG at 00:07