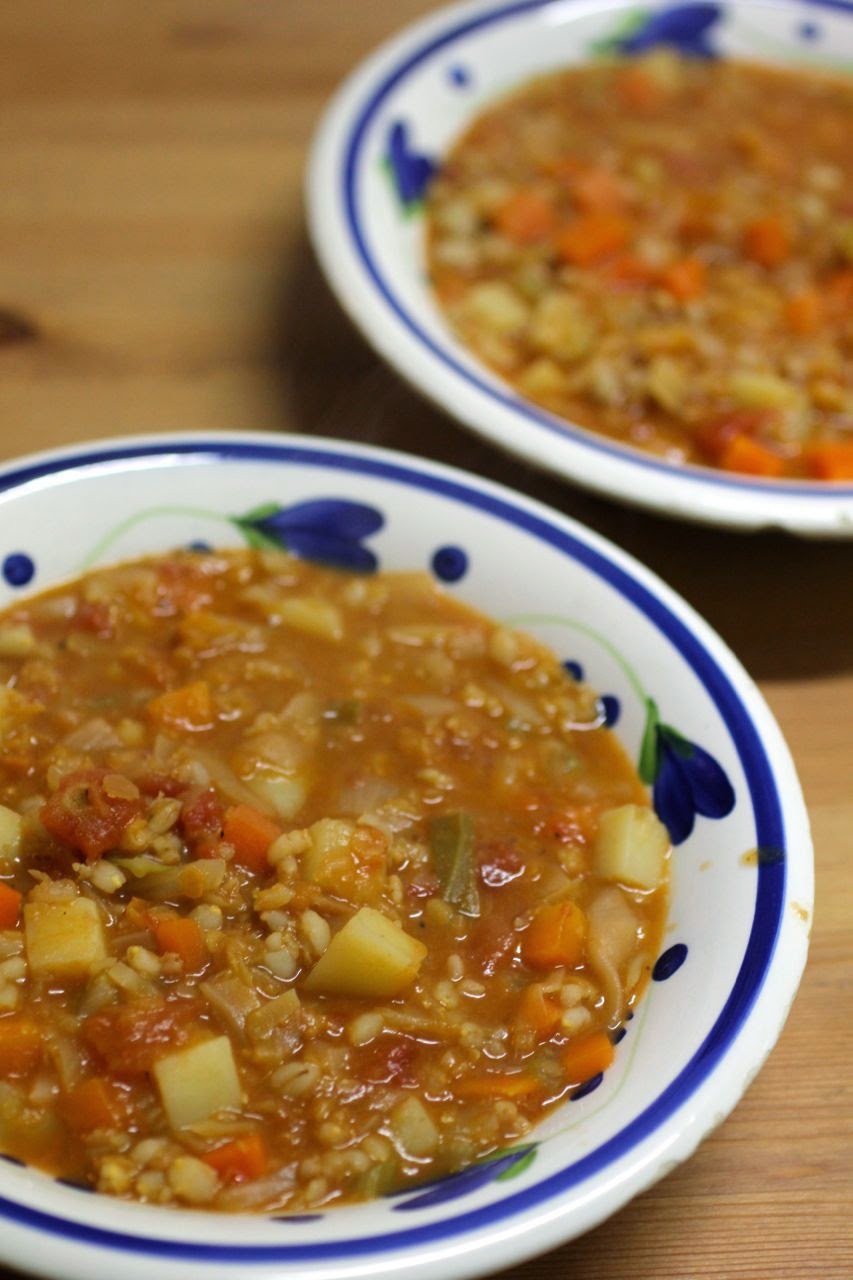 We eat so much soup that it gets a little embarrassing.  Just look at my recipe index.  And yet it is so healthy satisfying and delicious that I continue to eat it no matter what the weather.  Fortunately I have persuaded E that soup is a good thing.  He hated it when I first met him.  Now he embraces it with enthusiasm.  Especially when it reminds him of his mum.  Barley soup is always a winner with him as he had it regularly when he was young. 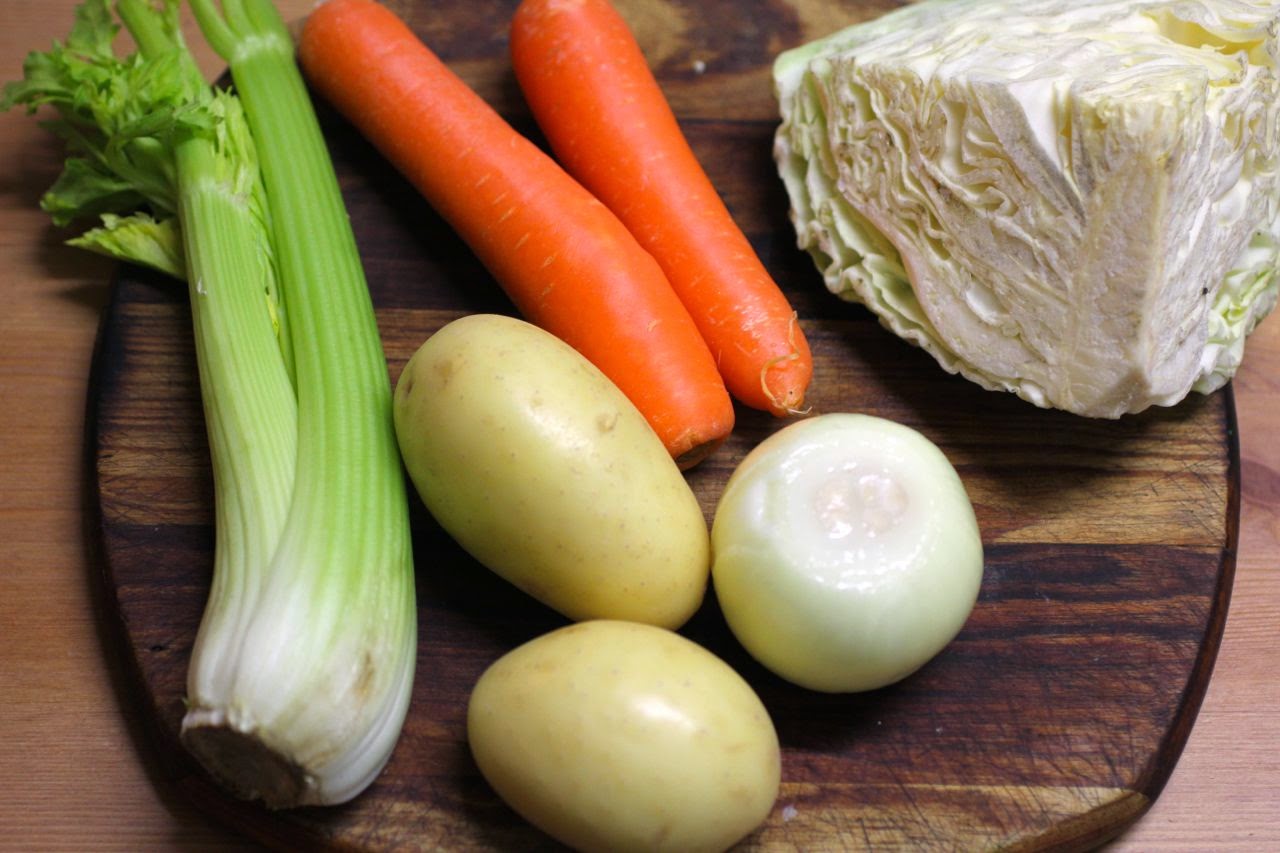 I based my soup on Karen's Meat-Free Scotch Broth.  I loved how simple and clear it looked.  My regular barley soup often gets very thick stodgy with the vegies that soften around the corners.  This soup had a tin of tomatoes and some red lentils, two of my favourite things.  When I came to making it I had lots of barley but not much carrots - Sylvia just keeps eating them - and a dearth of onions. 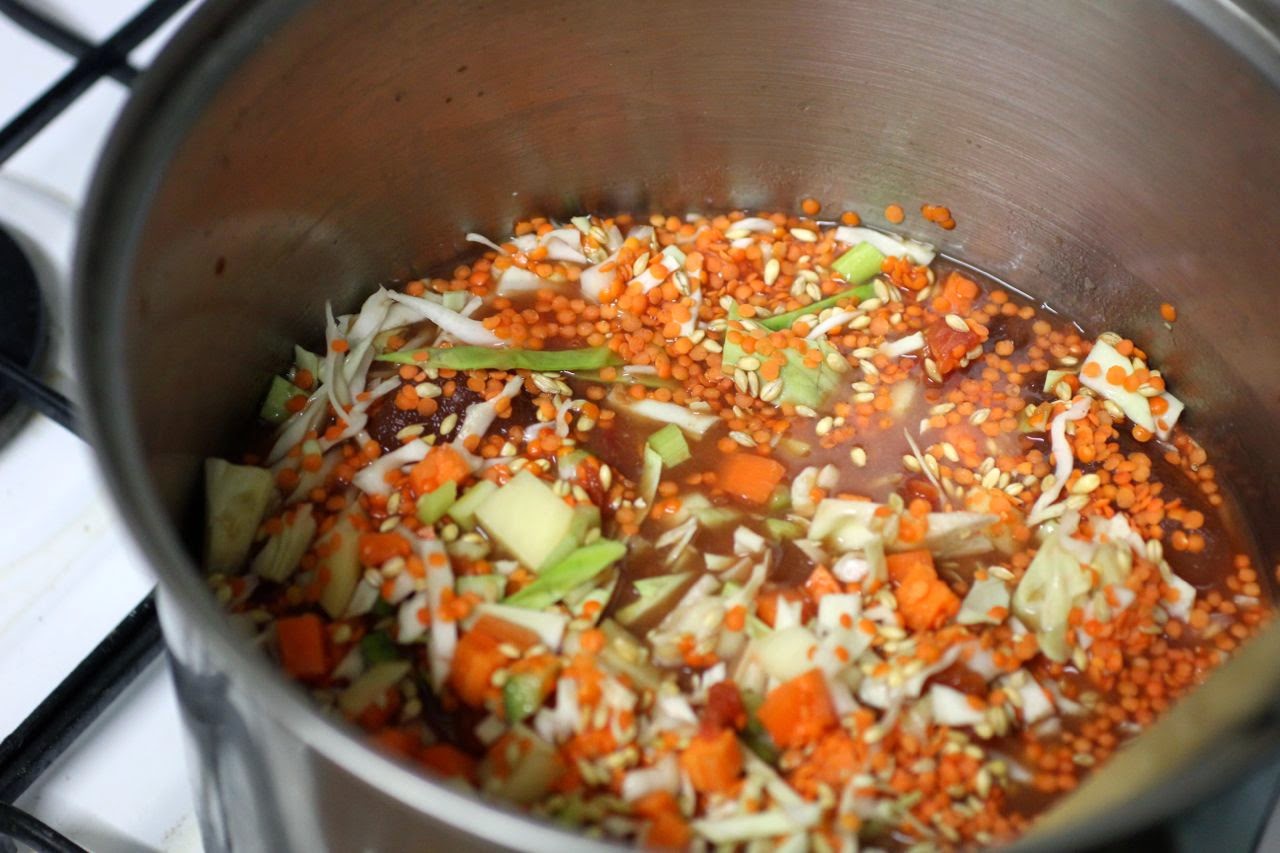 The great thing about this soup is that it is very forgiving.  It is healthy, fat free and cheap.  It will welcome whatever is in the fridge.  It is easy to make.  You just need some time.  All the ingredients just get thrown in the pot and simmer for an hour.  I used home made stock and a little leftover miso lentil gravy from Isa Does It.  I found that I needed to add some extra water both during cooking and after it had rested overnight.  Extra water seemed to require extra salt. 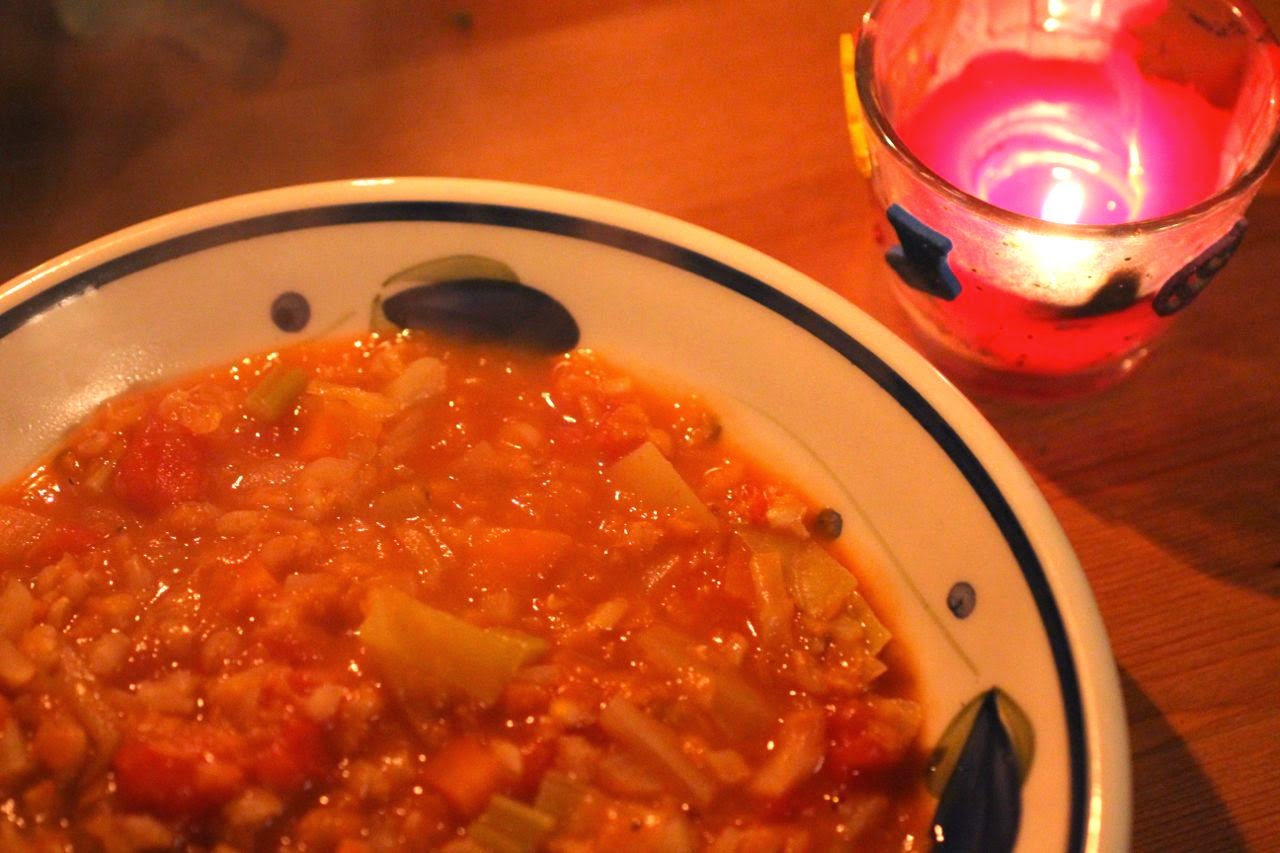 We still had candles about after our Christmas in July dinner so Sylvia decided to eat dinner by candlelight.  Barley soup is peasant food.  Not at all posh.  Candlelight made it seem a bit more special.  Yet in reality barley soup in the past might have been eaten by candlelight because that was all the light that was available.  Which reminds me yet again how lucky I am to eat this when I crave it rather than because there was nothing else to eat.

Update: I wrote this post a few weeks back when it was winter.  After some lovely spring weather on the weekend, today has brought us thunderstorms, heavy rain and flooded gutters.  I have been caught in the rain twice on my bike today.  I have been cursing the robbers who stole our car, which has now been written off.  Now I have to buy a new car (at least we are insured), to deal with the speeding ticket from when they were hooning around in my car, and to dry off all our clothes (and handbag, schoolbag, shoes etc) after Sylvia and I got home from school on our bikes.  Most displeased.  I wish I had a big bowl of this soup now.  Meanwhile a warm dry home is much appreciated!

I am sending this soup to No Croutons Required, a monthly vegetarian soup and salad blog event hosted by Lisa this month and run with Jacqueline.

Scotch broth.with lentils and barley
Adapted from Lavender and Lovage
Serves 4 to 6

Place all ingredients into stockpot.  Bring to the boil and simmer for about 1 hour or until vegetable soft and barley is cooked.  Stir regularly to check the lentils aren't sticking the bottom of the pot.  Will last for a few days.

This post is part of Vegan Month of Food September 2014.  This year for Vegan MoFo my theme is The Letter S.  Today is S for S for Same Same Tuesdays.  Go to my Vegan MoFo list for more of my 2014 Vegan MoFo posts.
Posted by Johanna GGG at 20:12