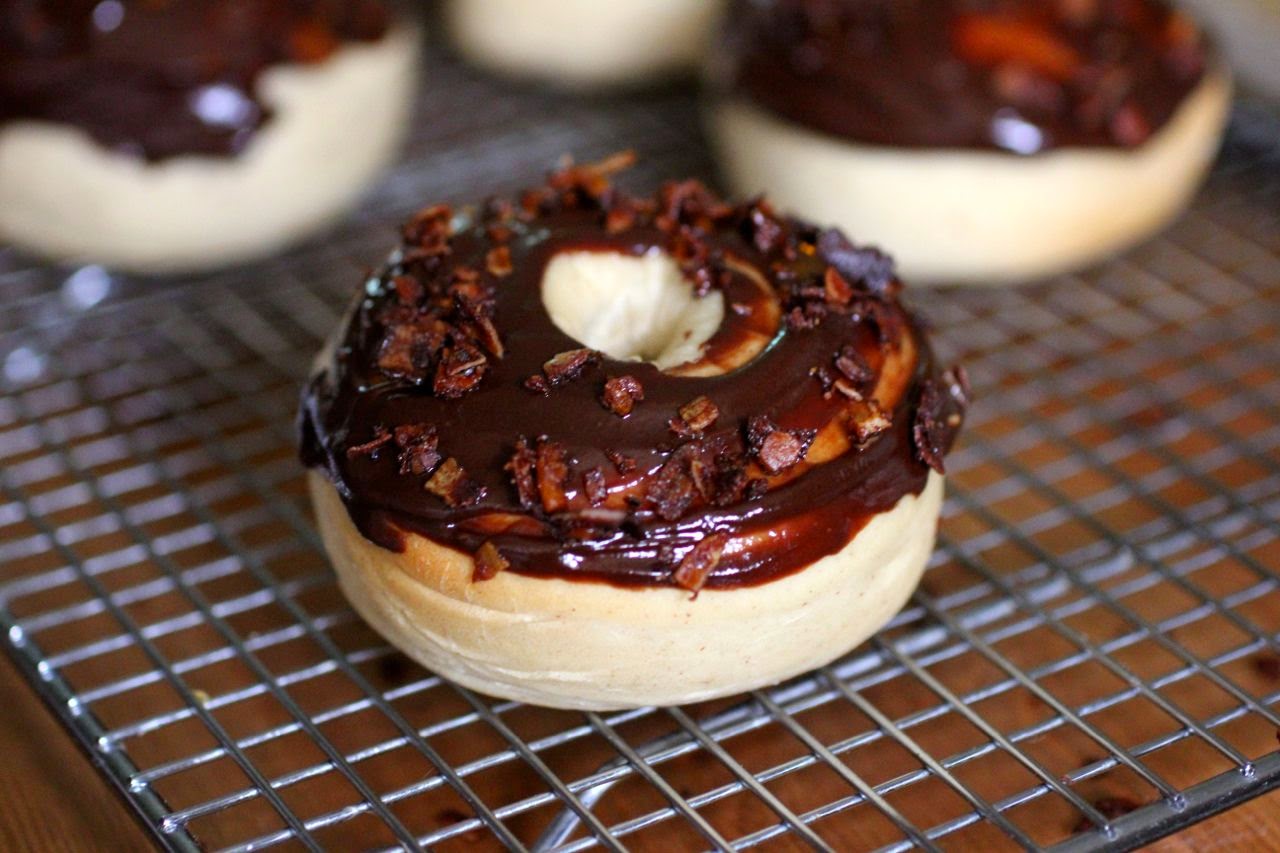 A few weeks back Sylvia was at home sick for the good part of a week.  She was too sick to go to school but well enough to need constant entertainment.  It seemed a good time to make doughnuts.  I have had my eye on the quirky recipe for Chocolate and Coconut Bacon Doughnuts at Oh My Veggies.  Smoky chocolate is one of my new favourite combinations.  And this has to be one of my favourite recipes I am sharing during Vegan MoFo. 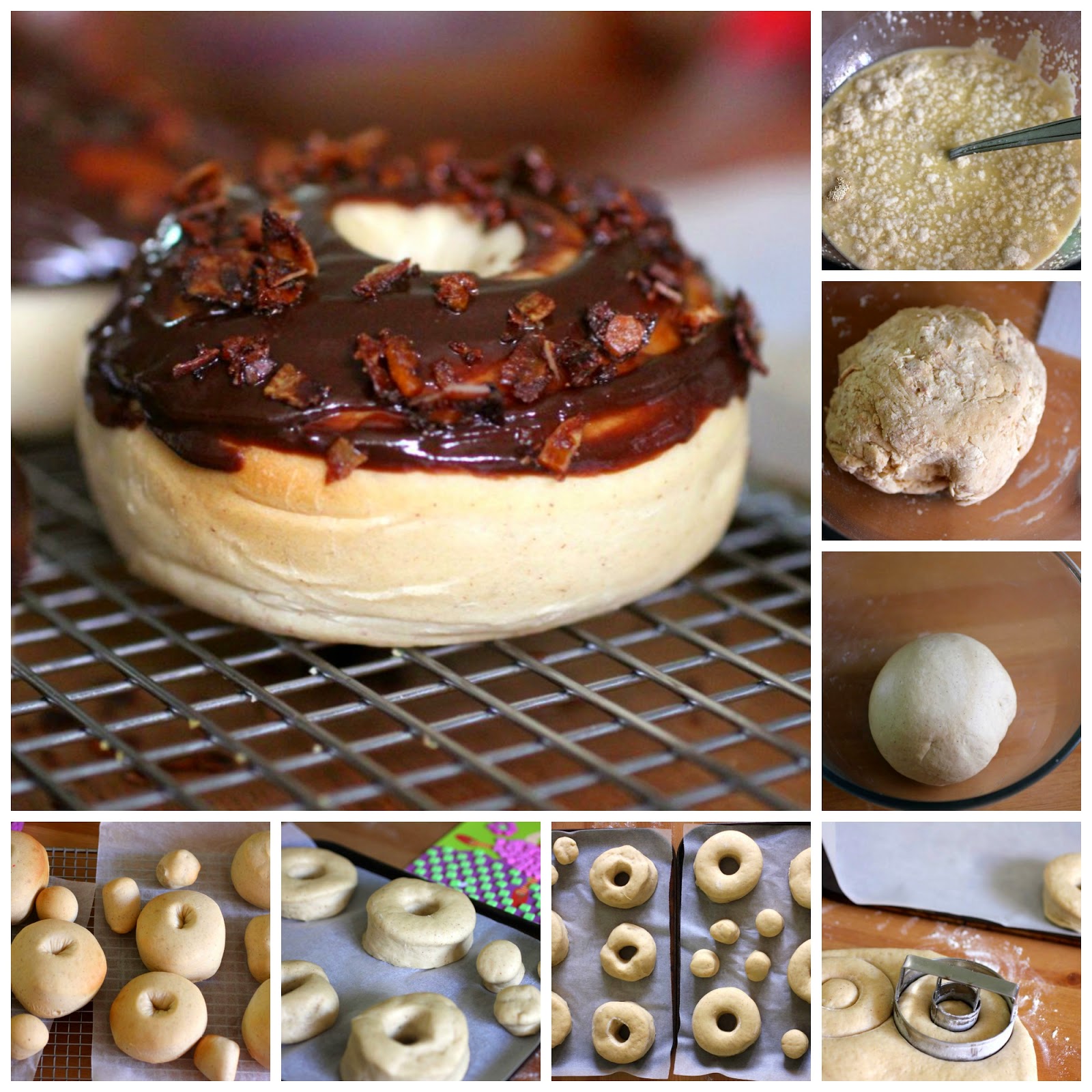 The doughnut recipe at Oh My Veggies was not quite right for me.  Too flaxy, no yeast and it didn't give me an opportunity to use my cute doughnut cutter.  So I searched for baked yeasted doughnuts and found Cate's simple recipe for vegan doughnuts.  I even knew it was good because I had sampled some at the Vegan Roast Masterclass.  I tweaked it slightly by omitting the baking powder (I wasn't sure I needed it) and using coconut milk.  They were lovely and soft.  I probably could have let them cook a bit longer so they had a bit more colour.  (Curse you, slow oven!) 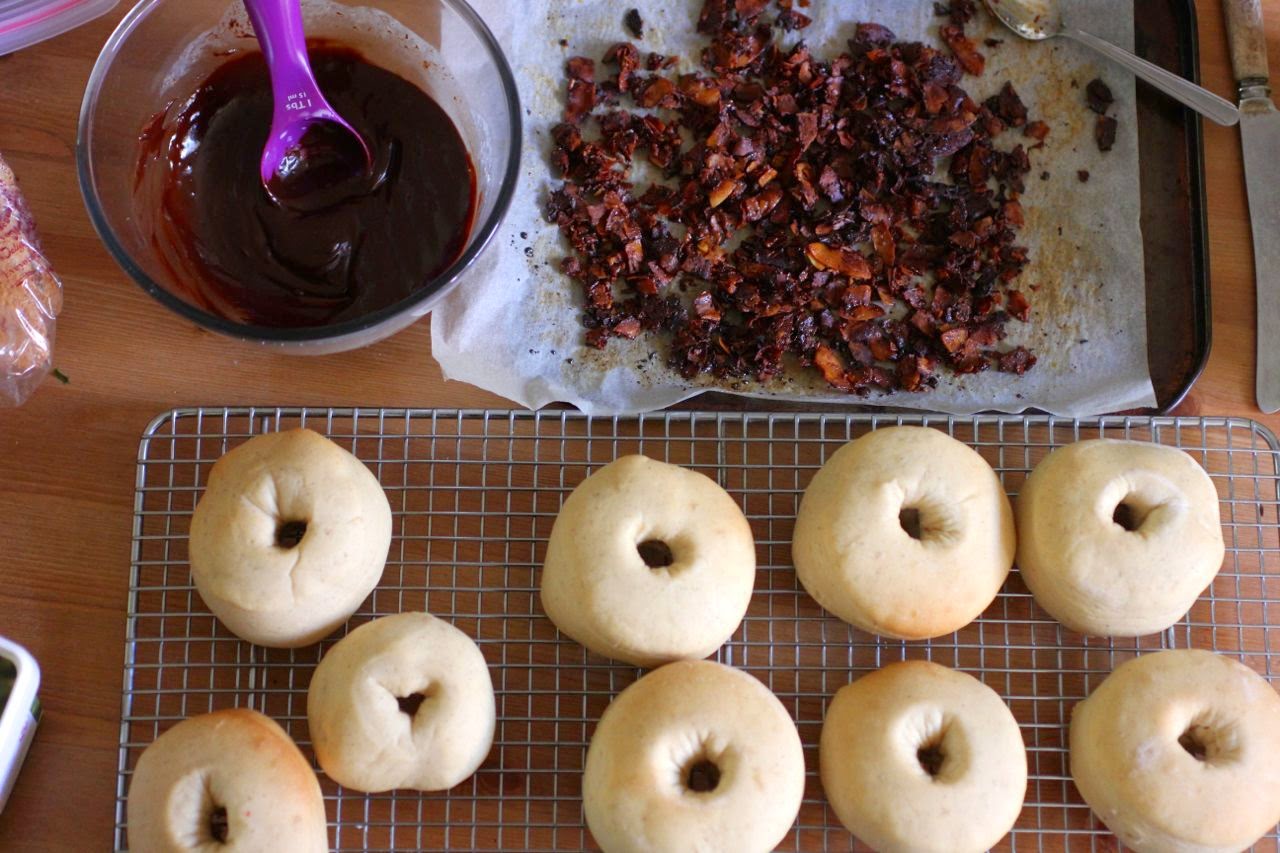 I really love my doughnut cutter but it was a wee bit small in the middle for these doughnuts.  I need to roll them a bit thinner.  When they came out of the oven the holes were virtually closed over.  Determined to have holes, I poked at the holes as you can see in above photo.  Speaking of holes, there were doughnut holes.  I rolled them in butter and sugar for Sylvia.  We probably ate too many.

The doughnuts were lovely.  Best on day of baking when the coconut bacon was crispiest -  but we kept some for the next day.  They were a great distraction.  Kids' sick days can go so slowly.  My mum had bought this below mosaic activity home from a trip to Ireland.  Sylvia had fun putting all the little stickers on the pictures and all over our house.  She has put up the pictures when she creates her own little houses. 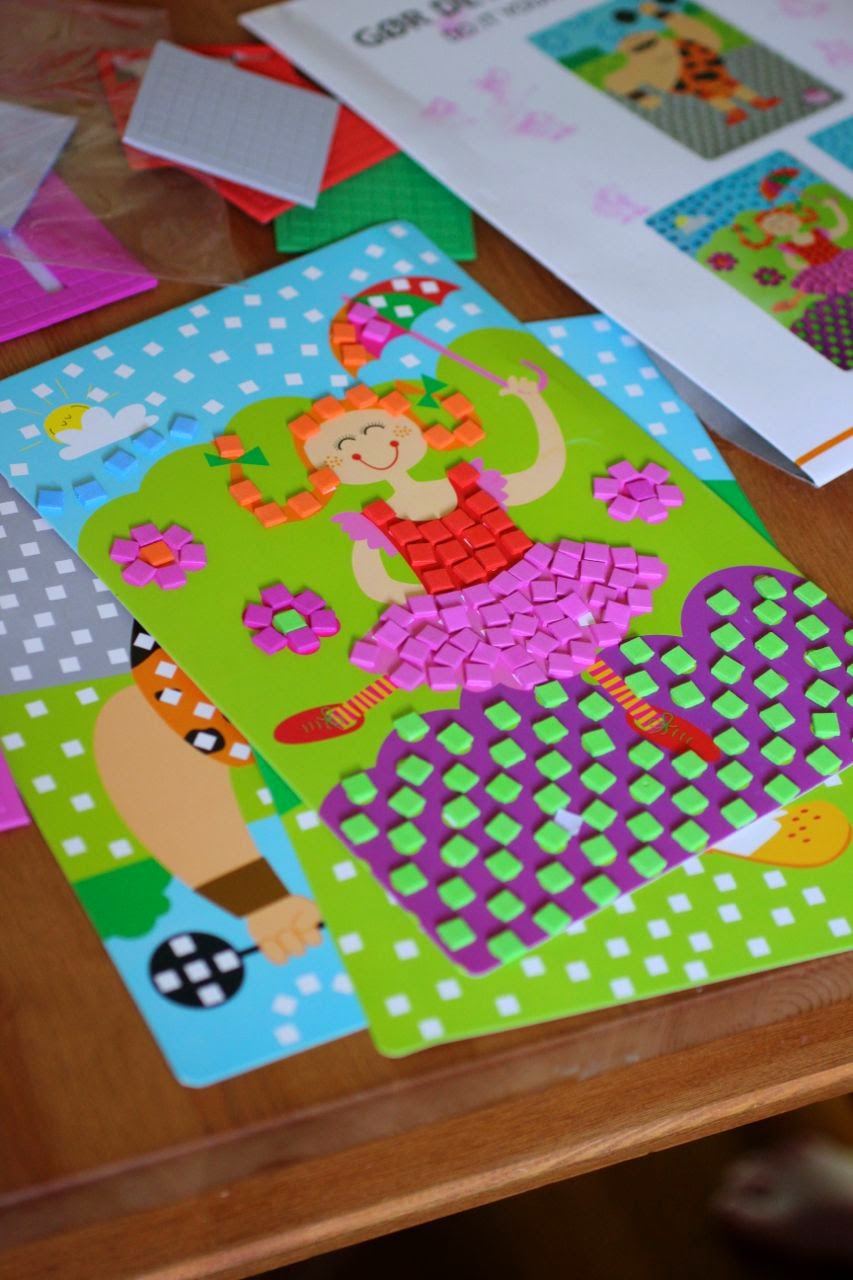 We also read a lot while she was sick and whizzed through The Lion The Witch and The Wardrobe.  Which is just the way to read any decent book.  Less ideal was falling asleep while reading it but it helped Sylvia get to sleep when she was unsettled.  Then we had to work out where we were.  As an aside, I find it quite hard finding good chapter books suitable for a 5 year old.  Any recommendations would be welcome.

A final note, I am flying to Adelaide this evening - without my laptop or family!  I can't wait to get on the plane.  A couple of posts are scheduled for the weekend but I will have to catch up with MoFo posts next week.

Baked doughnuts with chocolate glaze and coconut bacon
Adapted from Green Gourmet Giraffe, A Travelling Cook and Oh My Veggies.
Makes about 9-10 doughnuts plus holes

Heat milk to lukewarm.  Stir in the margarine and pour into a large mixing bowl.  Mix in sugar and yeast (leave for 5 minutes if you want to check your yeast is blooming but this is not necessary) and then mix in flour.  The last bit might need to be done by hand to mix in all the flour.  It will be a lovely soft dough.

Tip dough onto a lightly floured board and knead for 10 minutes.  I found I didn't need any flour after the first few minutes.

Place dough in a lightly oiled bowl (just use the one you mixed the dough in) - turn it around so the whole ball of dough is covered in oil.  Cover with a teatowel and prove for one and a half hours or until the dough has doubled in size.

Punch down and knead briefly until the dough is smooth.  Press the dough out to about 1cm thick.  Cut out either doughnut rings or round circles and place about 5cm apart on a lined tray.

Cover doughnuts with a teatowel and prove for about 30 minutes or until doubled in size.  Meanwhile preheat oven to 200 C.

While the doughnuts rise, make the coconut bacon by mixing all ingredients in a bowl, heating some oil in a frypan and cook until golden brown (ie lighter than mine!)

Bake for 10 minutes and cool on a wire rack.

When doughnuts are cool, make the chocolate glaze.  Mix all ingredients and melt in the microwave.  (I did 30 seconds and then mixed until smooth and glossy.)  Spread glaze over doughnuts and sprinkle with crushed coconut bacon.

On the Stereo:
Act of Free Choice: David Bridie

This post is part of Vegan Month of Food September 2014.  This year for Vegan MoFo my theme is The Letter S.  Today is S for Smoky Fridays.  Go to my Vegan MoFo list for more of my 2014 Vegan MoFo posts.
Posted by Johanna GGG at 11:05