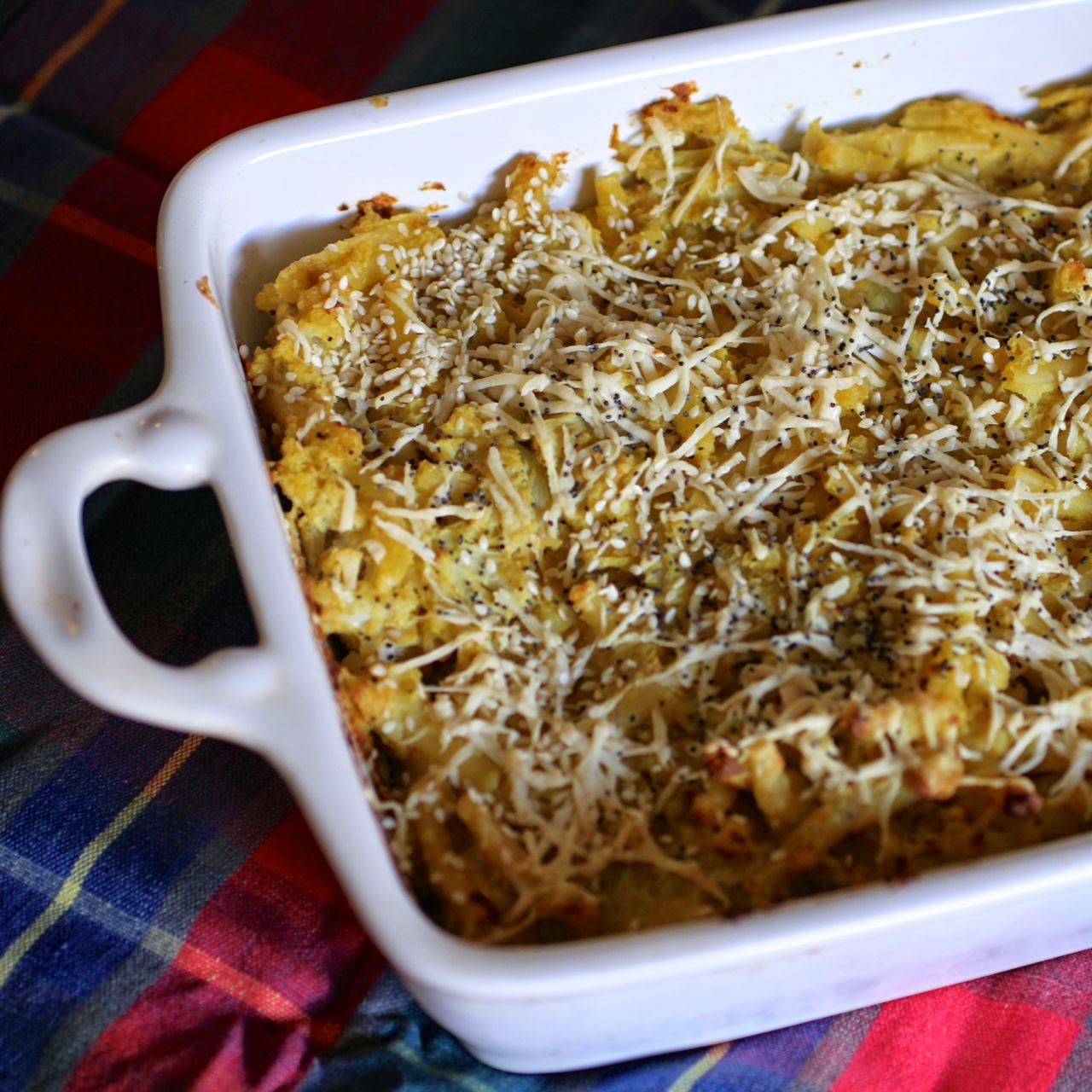 A while back I was at my parents' place, chatting to my brother who is a lover of carnivorous carbs.  I told him I had made a macaroni cheese.  He looked at me as though the food I eat was finally something he understood.  Then I ruined the bonding moment by adding that my macaroni cheese had sauerkraut, cauliflower and vegan blue cheese.  He told me he would never ever eat at my place. 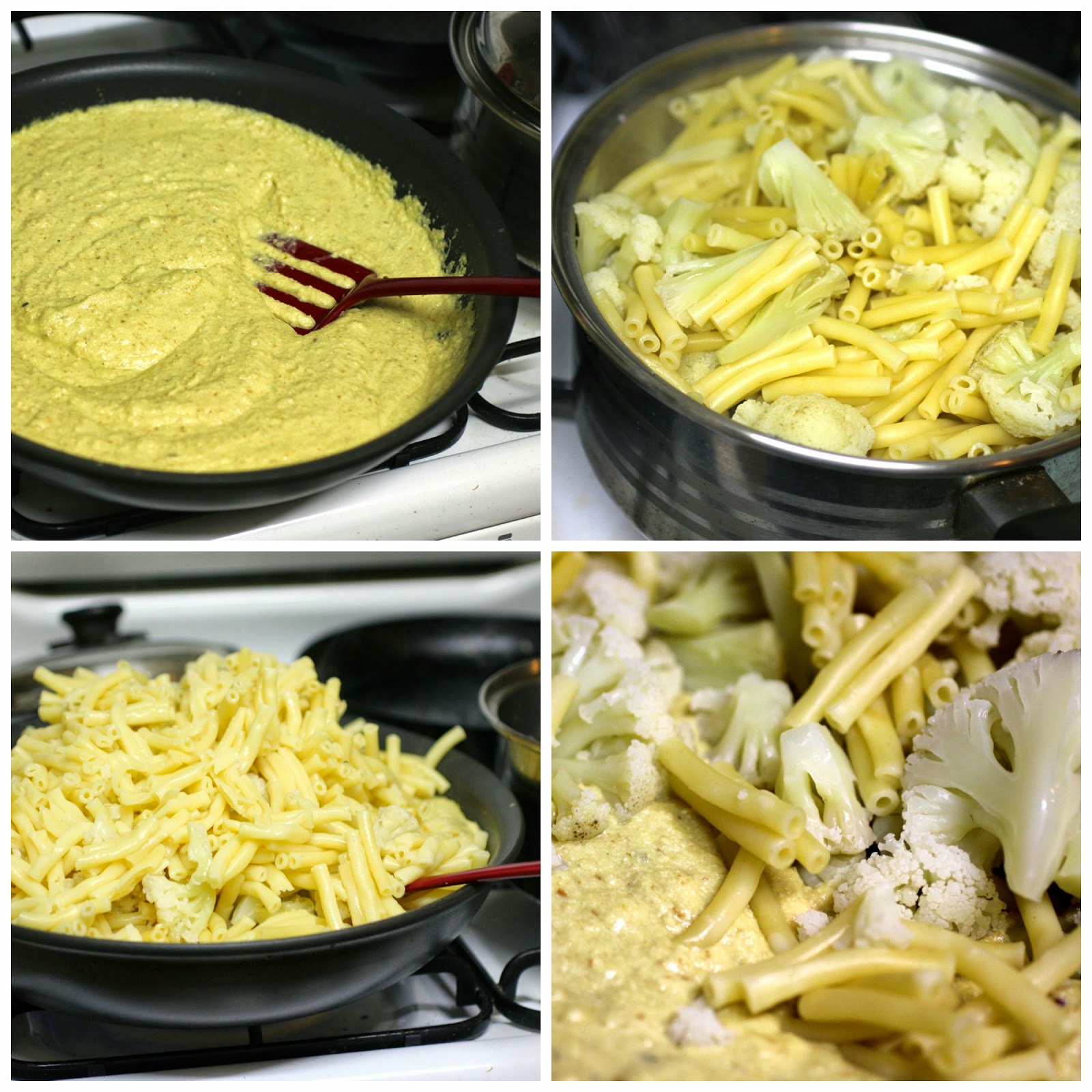 So yes, this pasta dish is not one to impress your friends who are dubious about your vegan lifestyle.  Save it for the adventurers in your life. Or just make it on a night like I did when I had scraps of vegan cheese to use and was determined to finish the bottle of verjuice that had taken up valuable kitchen real estate for too long.  Actually I didn't have enough sauerkraut so verjuice seemed close enough for jazz.  The cheeses are not essential but this is a good way to use up those heels of cheese that kick around aimlessly. 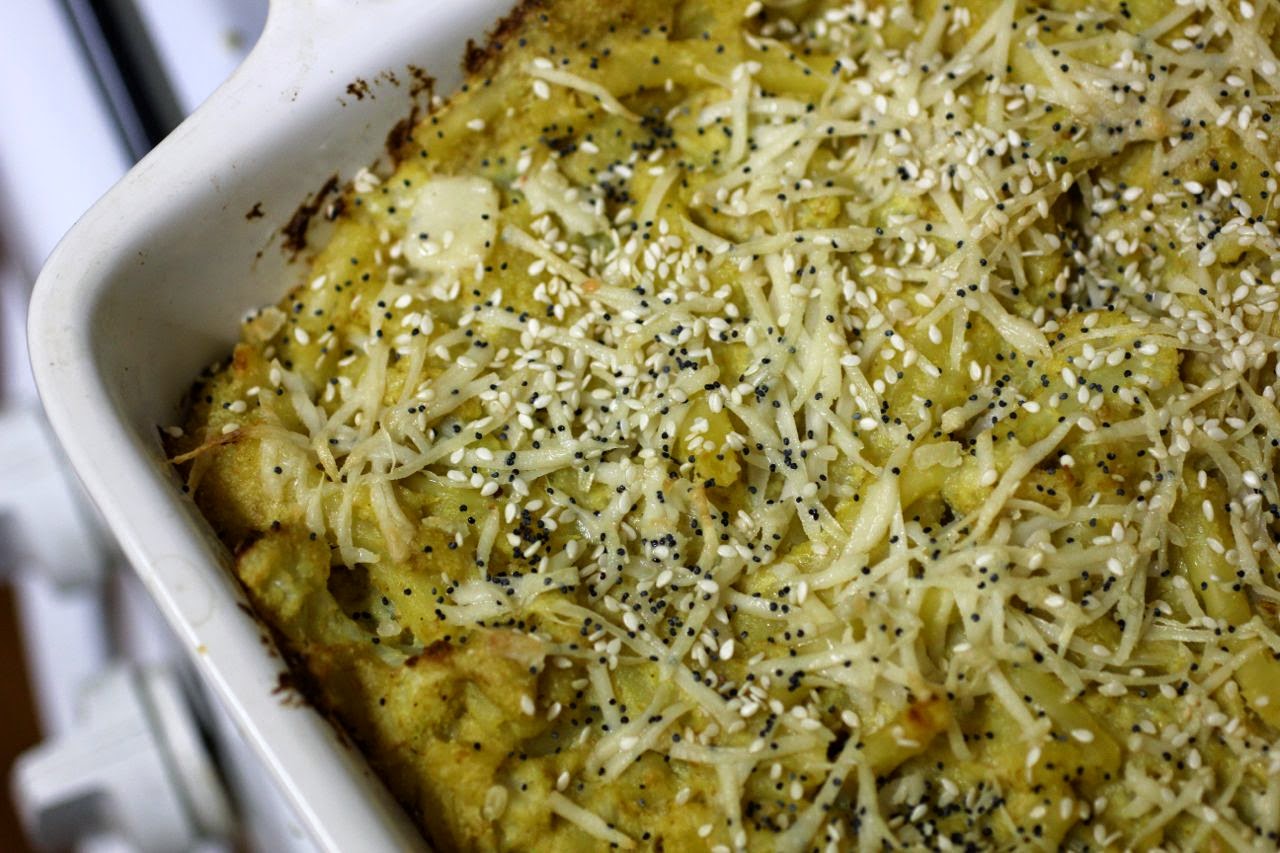 I made this pasta bake on a day when E's train was cancelled and Sylvia got her Frozen DVD and CD.  The gas flame went out while cooking, Elsa was singing 'Let It Go' on the tv and I got so flustered while cooking that I didn't take notes on timing as I often do.

The mac and cheese tided us across a weekend when I went to the farmers market, only to find I had the wrong date, and then headed off to Ikea and had a dilemma about how to wrap a wardrobe that was from the As Is section, because Ikea does not insure home delivery of off the floor furniture.  I was given three different pieces of advice about how to wrap it.  I stressed over what to do.  The wardrobe arrived in one piece anyway! 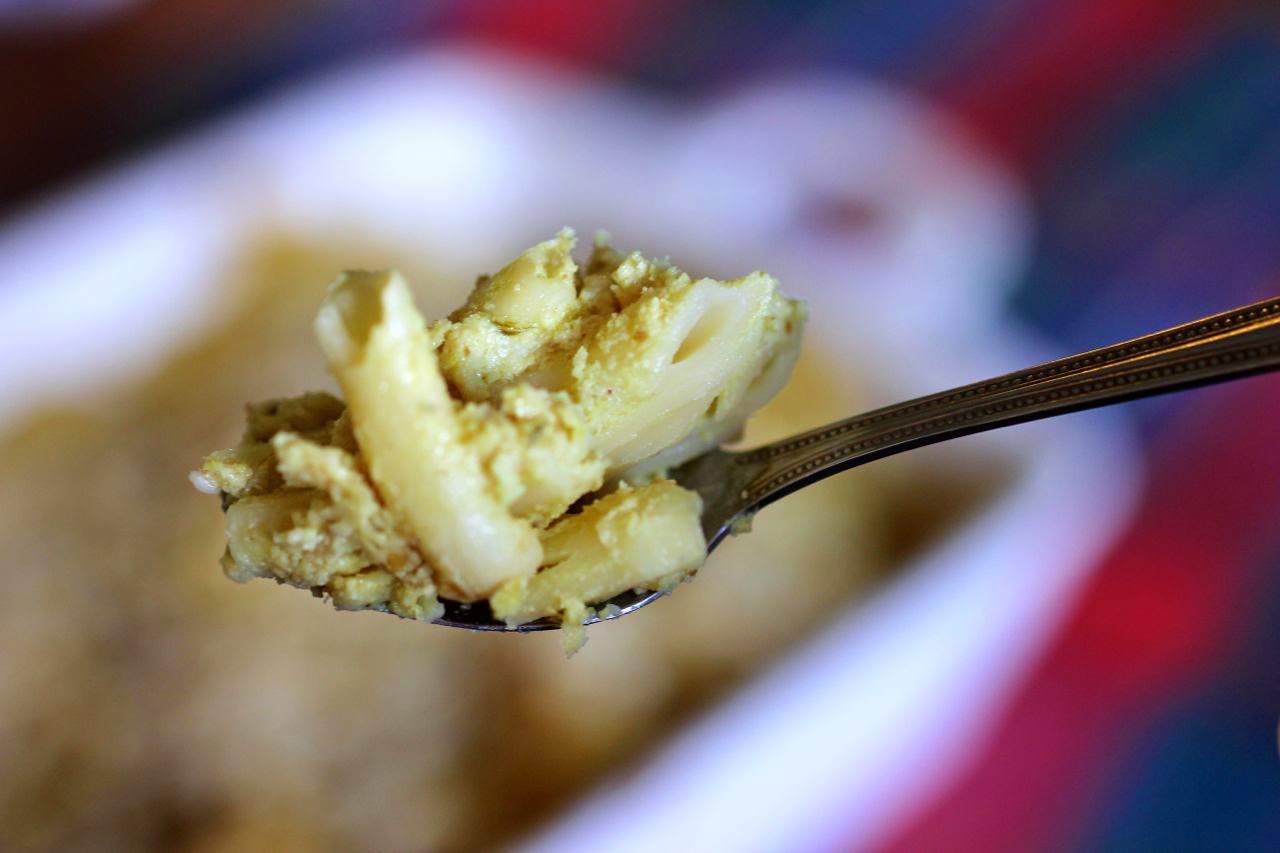 The pasta bake had been on my to do list for a while.  It had been one of the inspirations for this vegan cheese.  The sauce had a sharp flavour rather than that mild creamy taste I expect of a cheese sauce.  I asked E what he thought and was told he had added so much Tabasco he couldn't say.  Though I had intended to bake it, on the first night it was quicker to eat it as a stovetop mac and cheese.  I then baked a lasagna dish full of the leftovers.  It made a lot.  Which was fine because it improved over the next day or two.

Cook pasta and cauliflower in salted water for about 7 minutes or according to packet instructions.  Drain and set aside.

Blend (drained) cashews with 1 cup of water and 1 tsp stock powder until as creamy as your blender or food processor will do.  (Isa of Post Punk Kitchen soaks her cashews because her machinery is fairly basic.  Mine too.  My cashews were a grainy sort of creamy.)  Add another cup of water.

Fry onion in 1 tbsp of oil until soft.  Stir in garlic and sauerkraut for a minute or two.  Tip mixture into the cashew cream in the food processor or blender.  Blend.  Add in verjuice, turmeric, pepper, nutritional yeast flakes, mustard, salt and lemon juice.

In an extra large frypan, fry remaining 2 tbsp oil and the flour until golden brown.  (I added a bit more flour so it was quite thick and was glad I did,)  Gradually add in remaining 2 cups of water plus 1 tsp stock powder, stirring constantly to avoid any lumps forming.  Bring to the boil, stirring frequently until it thickens.  Now stir in cashew mixture and blue cheese.  Heat until it has thickened and is bubbling at the corners.  Turn off the heat and stir in pasta and cauliflower.

At this point you can just eat the pasta with sauce or spoon it into a greased lasagne tin and bake for 25 minutes at 200 C or until the top is golden brown.

On the stereo:
Frozen soundtrack

This post is part of Vegan Month of Food September 2014.  This year for Vegan MoFo my theme is The Letter S.  Today is S for Surprising Wednesdays.  Go to my Vegan MoFo list for more of my 2014 Vegan MoFo posts.