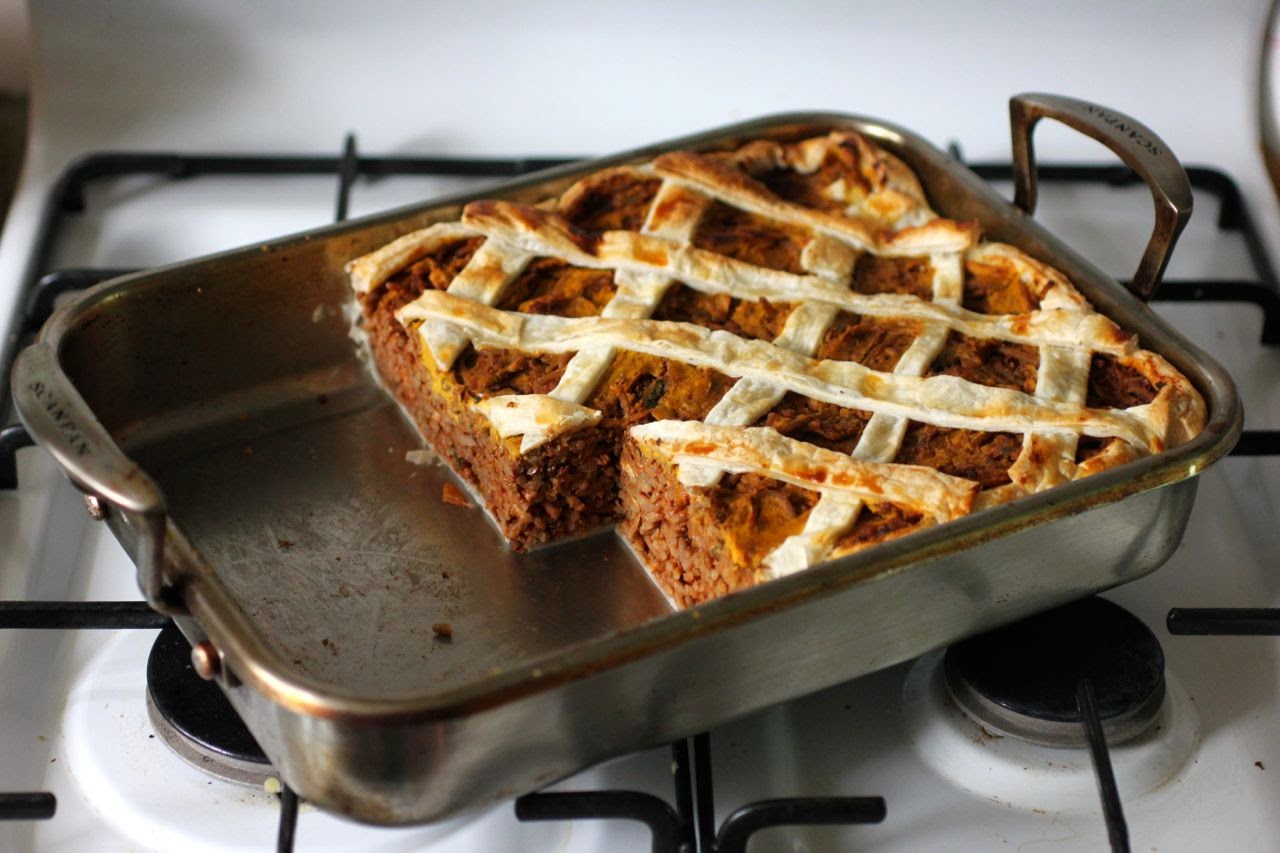 Readers and friends often comment at how much work I put into cooking.  Here is my secret.  Leftovers!  Yes I love to cook up a big bake or lasagne and let it feed us the rest of the week - if we run out I make a simple soup.  So when I share this pasta bake which took quite a lot of time, bear in mind that the extra effort on one night meant very little effort for a few nights afterwards. 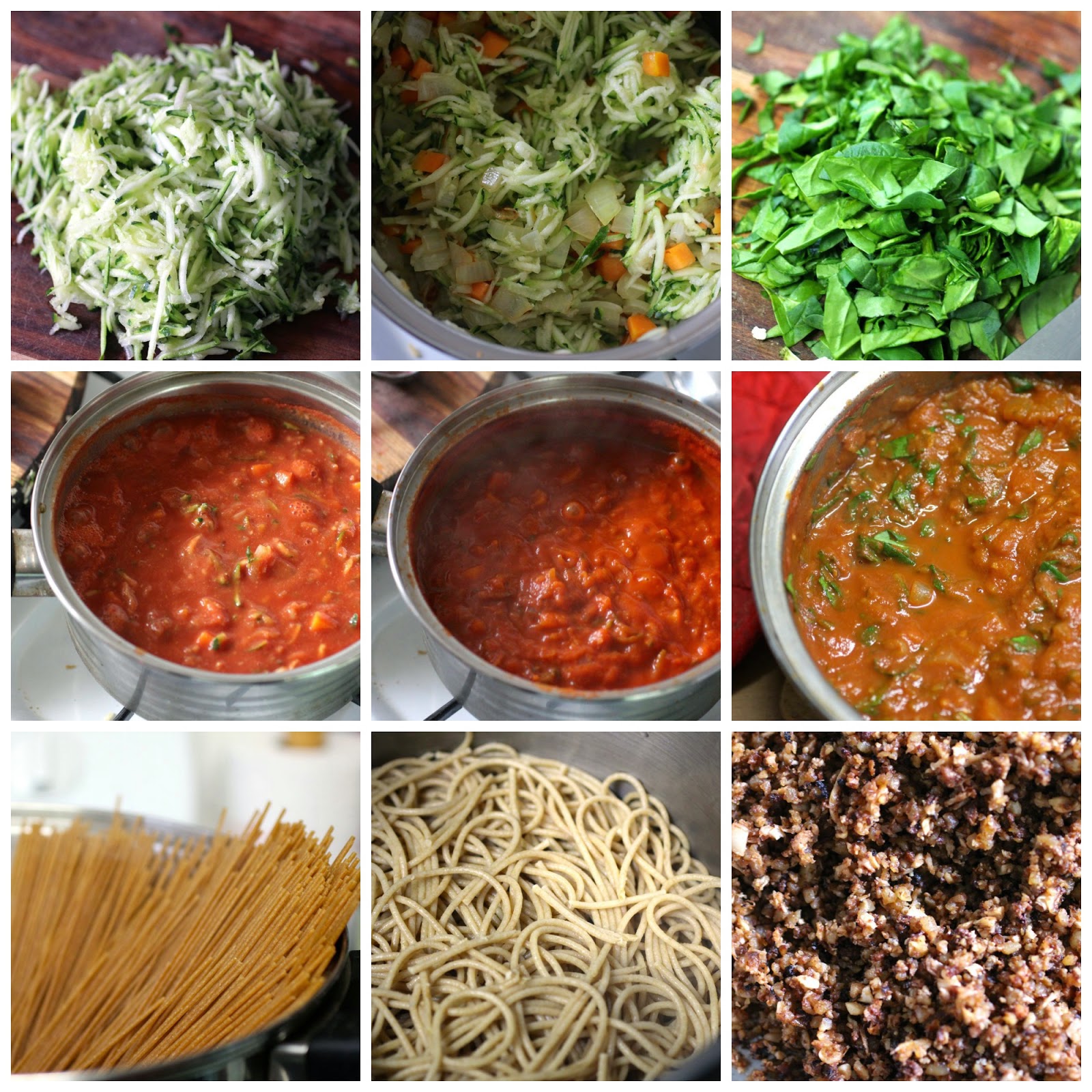 The crazy idea of spaghetti pie comes from Kate of No Meat and Three Veg. I saw her post at the end of August when I was thinking about dishes starting with the Letter S for Vegan MoFo.  The vision of this dish would not go away.  Finally I had some leftover vegan cheese sauce and a cauliflower I had bought on special for $1 that needed to be used quickly.  Suddenly the dish presented itself. I had already decided that I would use puff pastry rather than shortcrust like Kate's.  I had a huge packet of vegan puff pastry in the freezer.  So I was surprised to find myself running short on the pastry.  It seems that  the three batches of sausage rolls made a bigger impact on the stash than I had expected.  Hence the lattice topping.  I never planned for it to look that pretty. 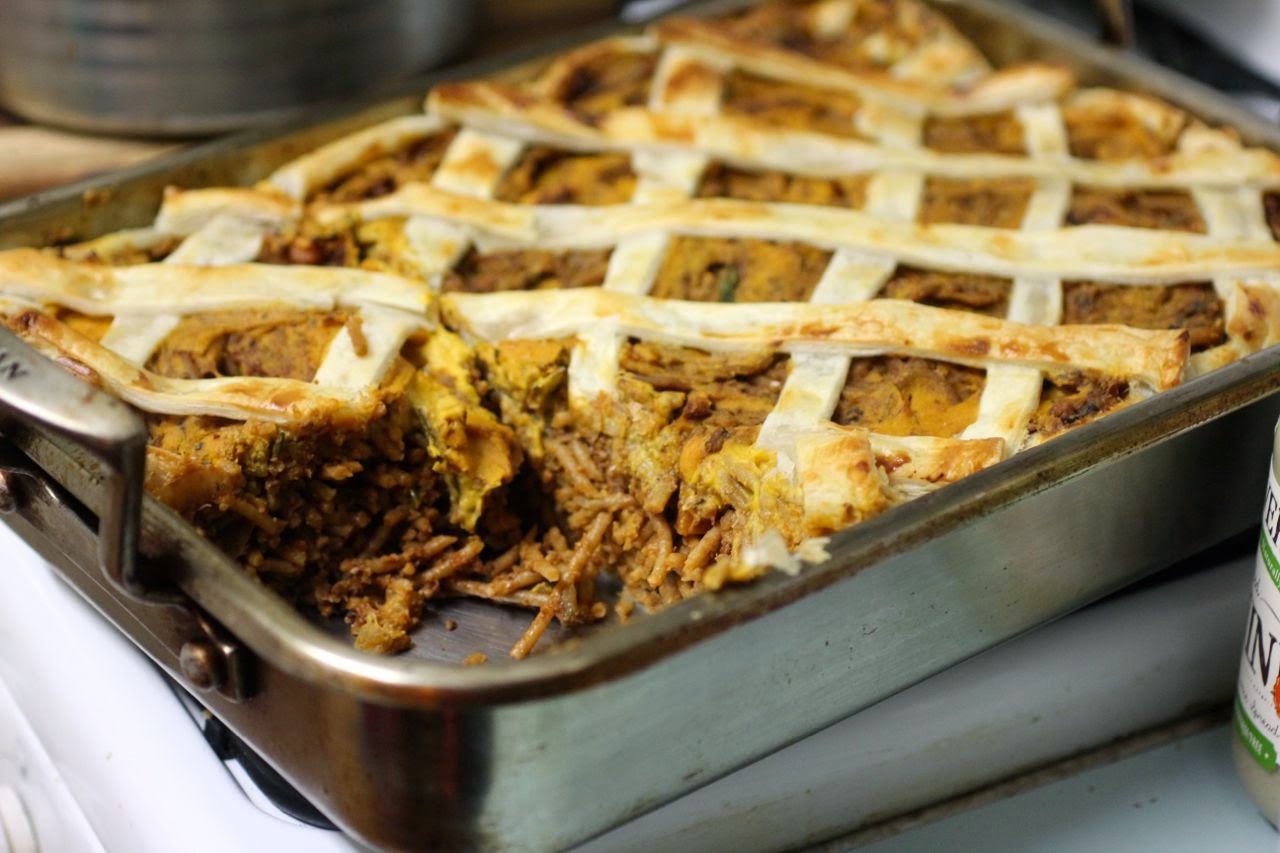 And the verdict!  This was great.  I was a bit nervous about using the puff pastry on the bottom of the pie.  I even rang my mum for advice.  She suggested I use a metal tray and bake it on a pizza stone.  The double carbs of pasta and pastry made fantastic comfort food.  I wished that I had more and less intense cheese sauce.  I made Ricki's walnut and cauliflower mince meat which gave the back a really rich flavour.  A light milky cheese sauce would work well with it.  I also considered grating my vegan bio cheese on top but didn't have quite enough left. 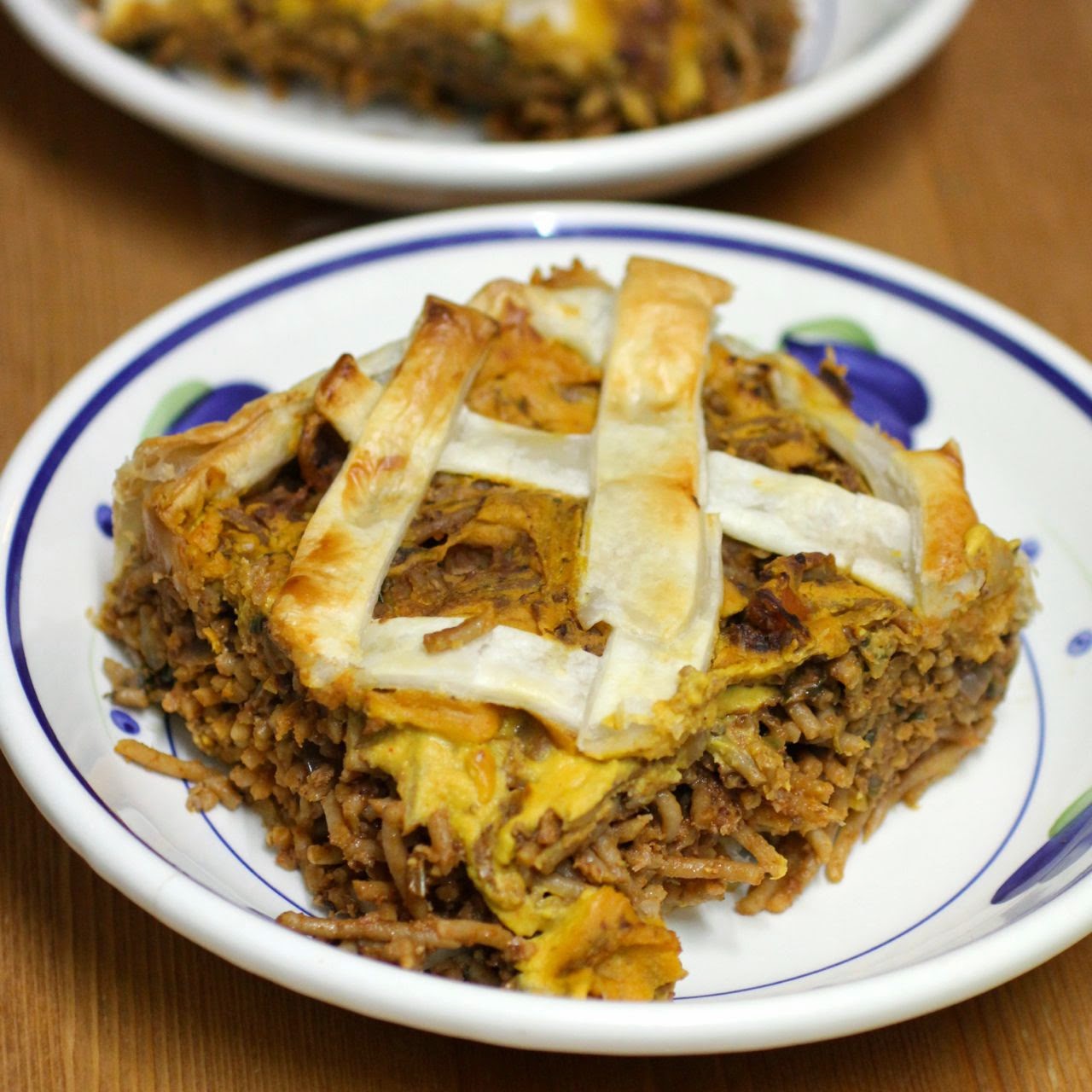 Indeed it was a very substantial pasta bake.  (Note that the above slice was actually a bit too generous!)  It is a recipe with lots of components that requires lots of time.  Yet it is worth the effort and it can be made ahead of time if you are entertaining or going to a potluck.  I would recommend eating it with lots of salad or green vegies.  However, if like me, you don't have lots of energy leftover to prepare sides to eat with it, you can console yourself that it has lots of vegies in it.  Even if it does get drowned in tomato sauce.

I am sending this pie to Shaheen's combined Eat Your Greens and Pasta Please blog events with this month's theme being pasta with green vegies.  Jac is the coordinator of Pasta Please.  I am also sending it to Elizabeth's Kitchen Diary for the Extra Veg blog event that is overseen by Fuss Free Flavours and Utterly Scrummy.  Though the pie looks like a lot of carbs, it hides a head of cauliflower, carrot, zucchini, tomato, onion and spinach. 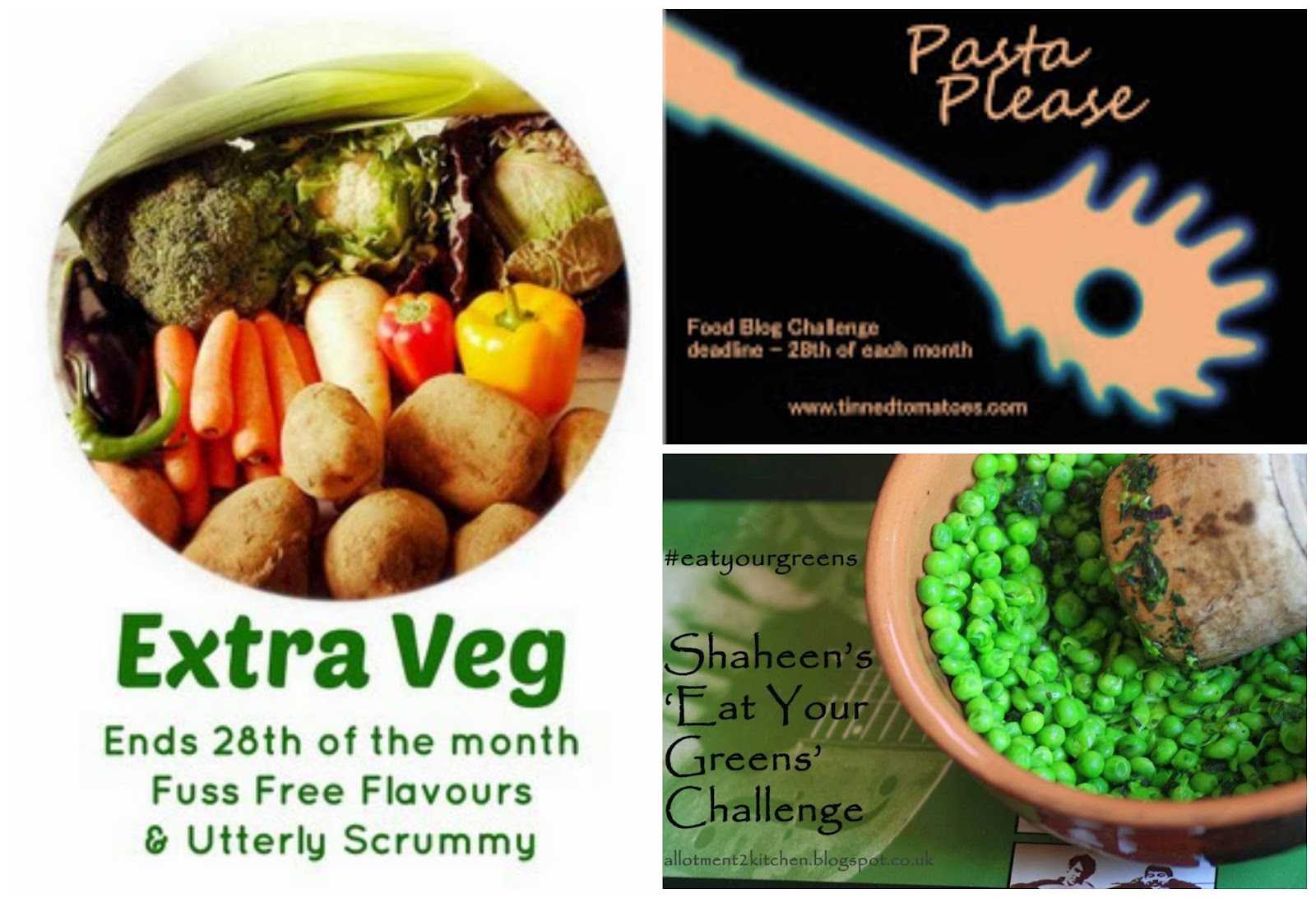 And now for a few random notes:

Preheat oven to 220 C.  Place a baking/pizza stone in the oven.

Cook and drain spaghetti according to package instructions.  Mix "mince meat" and tomato pasta sauce with spaghetti.  (I used my stockpot and pasta insert to cook the pasta and then mixed the sauce into the pasta in that pot.)

Bake for about 30 minutes, or until the pastry is golden and flaky.

* I used 1/2 batch of hurry up pumpkin alfredo but would probably do a simple white sauce with seasoning, nutritional yeast flakes and seeded mustard for a simpler flavour.  I think more cheese sauce would be good so I have specified 2 cups.  You could always just do a simple margarine/flour/milk white sauce and cover with a vegan cheese like biocheese.

** This bake would work well without the pastry but then it would be a pasta bake not a pie and that wouldn't be so much fun!

Heat oil in a medium saucepan over medium heat and fry onion and carrots for 5 to 10 minutes or until vegies soften.  Add zucchini, passata, tomato paste, red wine, tahini, maple syrup, mustard and salt.  Use about 1/2 a cup of water to rinse out the passata bottle and add to saucepan.  Simmer for 30 to 45 minutes or until mixture has thickened.  Season to taste.  Remove from heat.  Stir in spinach.

This post is part of Vegan Month of Food September 2014.  This year for Vegan MoFo my theme is The Letter S.  Today is S for Surprising Wednesdays.  Go to my Vegan MoFo list for more of my 2014 Vegan MoFo posts.
Posted by Johanna GGG at 11:46