ShanDong MaMa for a speedy lunch! 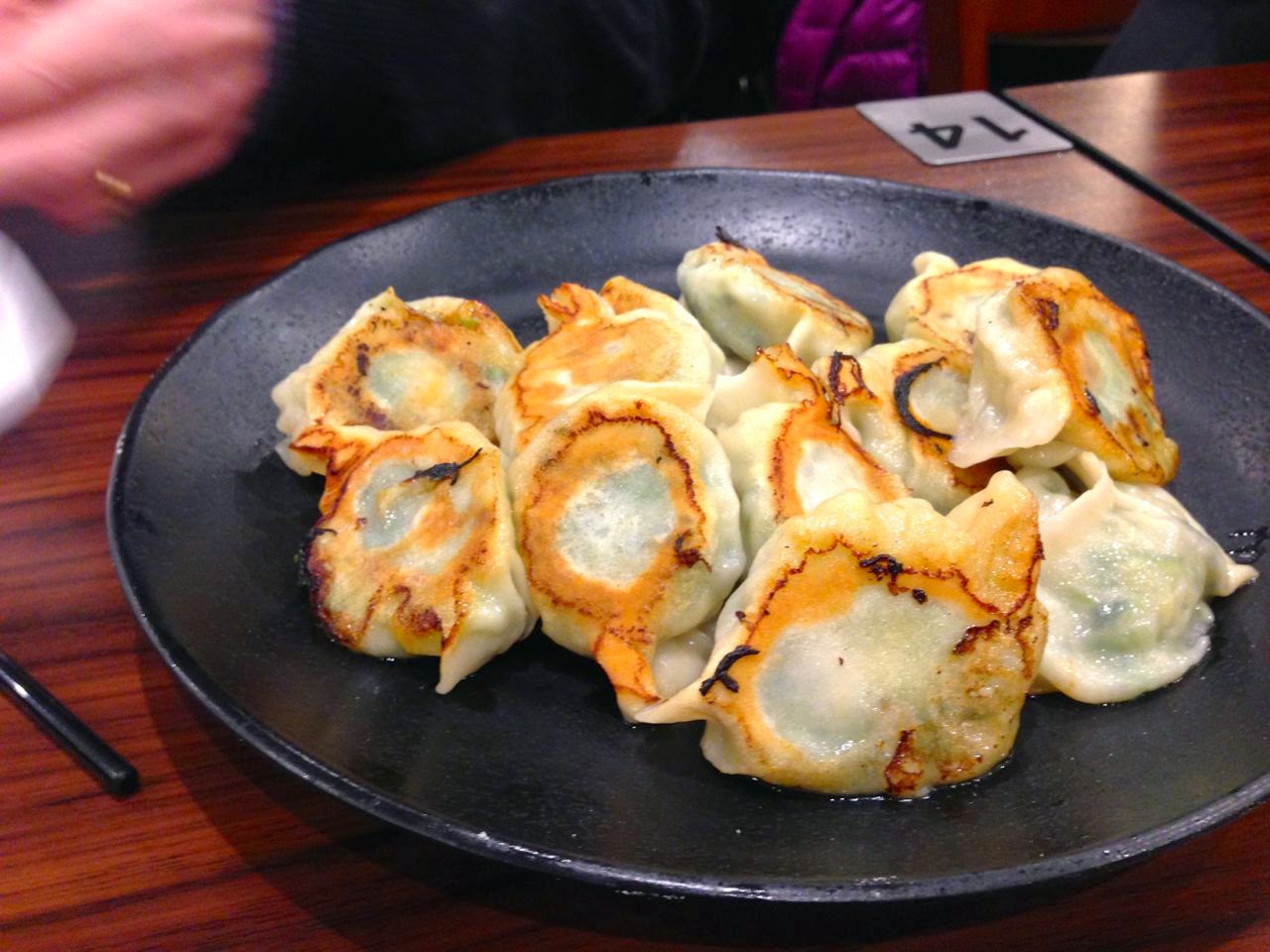 Given that E and I eat the same dinner most nights, you wouldn't think it would be so hard to find a place to eat together on his lunch break.  Yet we had a lunch date a few weeks back when he was focusing on time and I was focusing on taste.  I suggested ShanDong MaMa based on Veganopoulous' review.  I told E there might be queues.  He does not do queues at lunchtime.  So I went alone.  As I arrived there were no queues.  I texted him and he hurried down.

Meanwhile I had ordered panfried vegan dumplings.  I asked the staff to put them on hold til E arrived.  Another stomach meant we could share another dish.  I ordered the scallion pancakes.  The dumplings were already cooking but they kindly put them aside until E arrived.  Meanwhile I drank the complementary tea and did some sudoku.

Once E arrived the dumplings did not take long.  They are filled with zucchini, tofu, black fungus, coriander, rice noodles, ginger and garlic.  We picked them off the plate with our chopsticks and dipped them in soy sauce.  They were very light and flavoursome.  Despite being panfried they are pillowy soft. 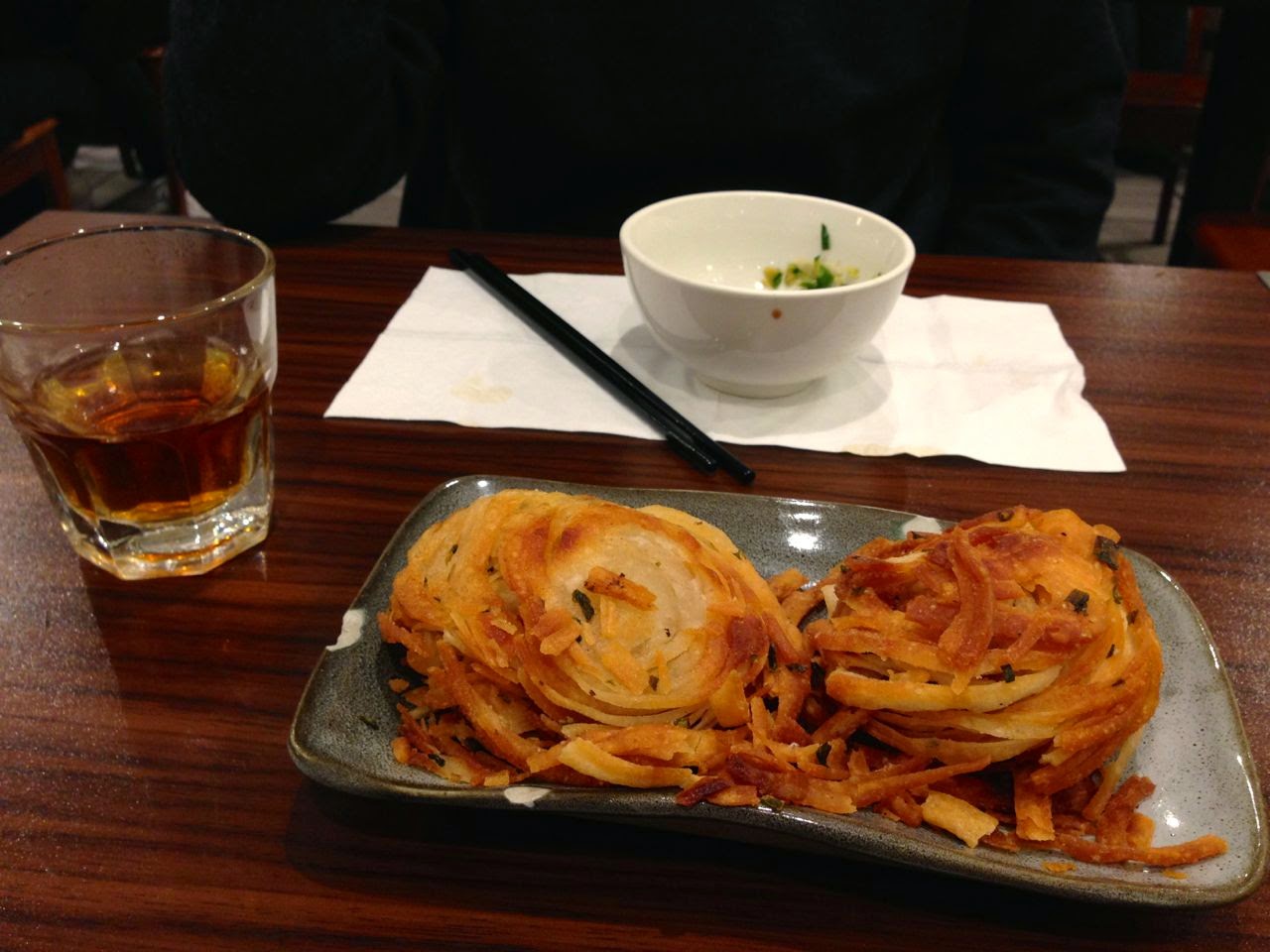 Next came the scallion pancakes.  I can't remember having any scallion pancakes before but I think I am right in claiming these are quite unlike the usual ones you might be served.  They are crispy birds nests of coiled fried dough.  E kept waiting to discover a soft centre but they were crunchy most of the way through.  Like the oddest chips you have ever had.  And so good you can't wait to have them again. 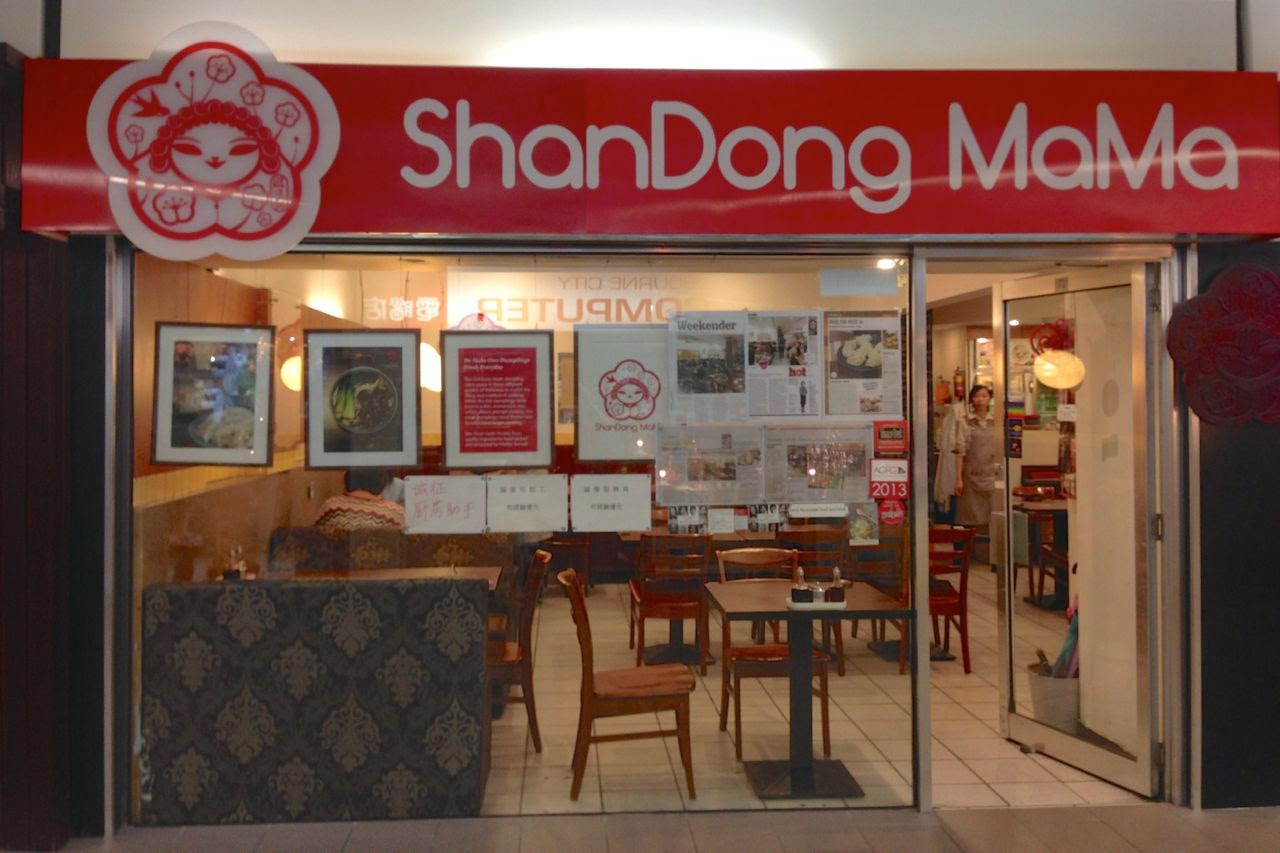 By the time we left the restaurant was busy.  No queues.  But not many free seats.   The menu had a few other dishes marked vegan including an intriguing edamame with olives.  Nothing else to challenge the delicious dumplings and scallion pancakes.

It seems there was quite a buzz about the place last year, especially after it won the Time Out Food Award Best Bang for Buck category (2013).  With 12 dumplings for $12 dollars, it was good value.  The food was delicious and interesting.  The staff very friendly and the ambiance was relaxed.  We will be back, especially next time we need to sort out a place for a quick lunch date. 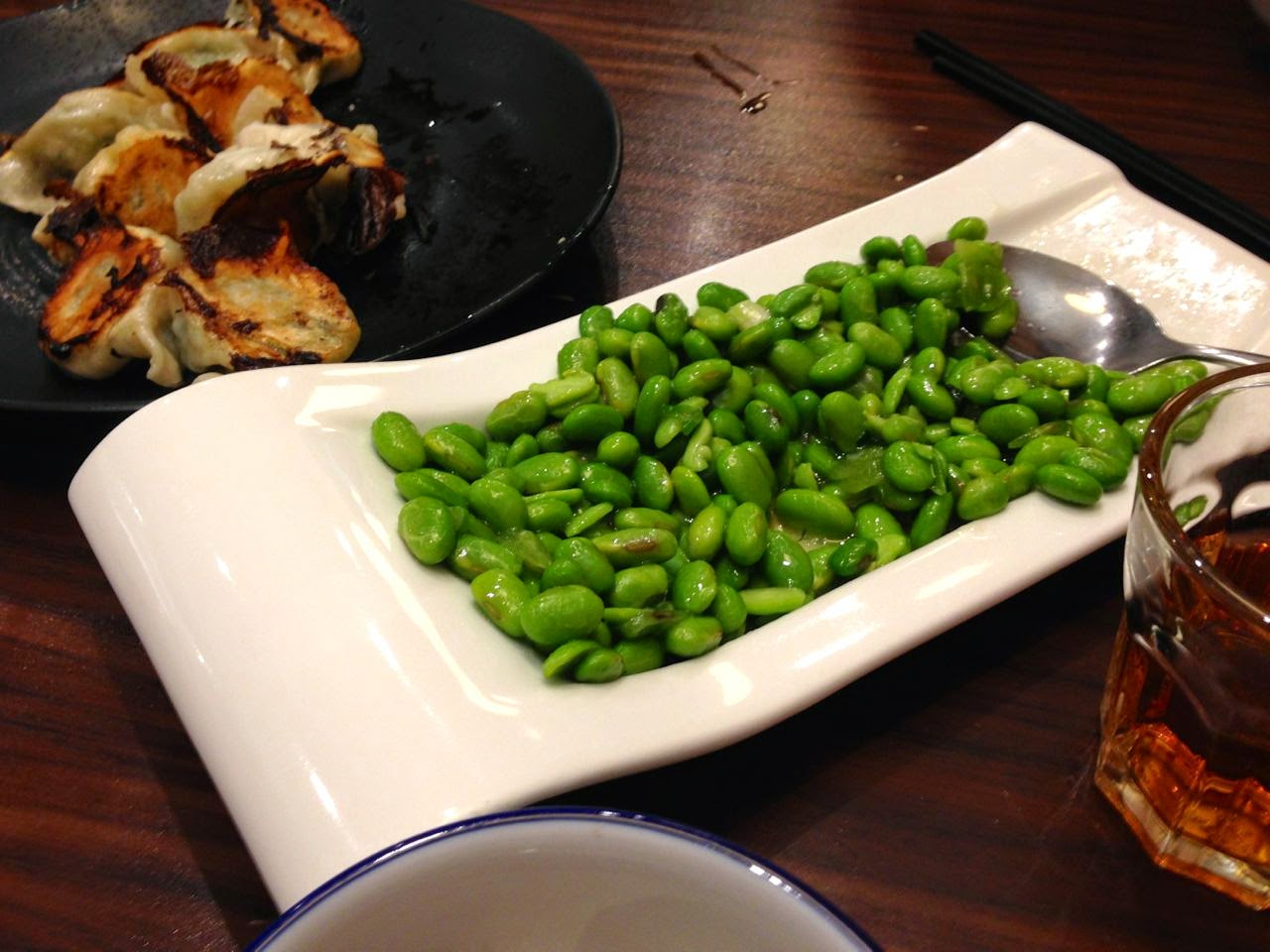 Update September 2014 - I went there again with E and Sylvia.  She chose to drink grass milk jelly (which doesn't seem vegan but the waitress was a bit vague).  They were kind in making us the edamame without the olives, though it still had some seasoned sauce on it.  The dumplings were even crispier fresh.  I still love it.

Update July 2016: Visited today and found they are no longer doing the amazing scallion pancakes.  The menu looks quite different though they still do the vegan dumplings.  We decided not to eat there as there wasn't so much for Sylvia to eat there.  I don't think they did the edamame dish any more either. 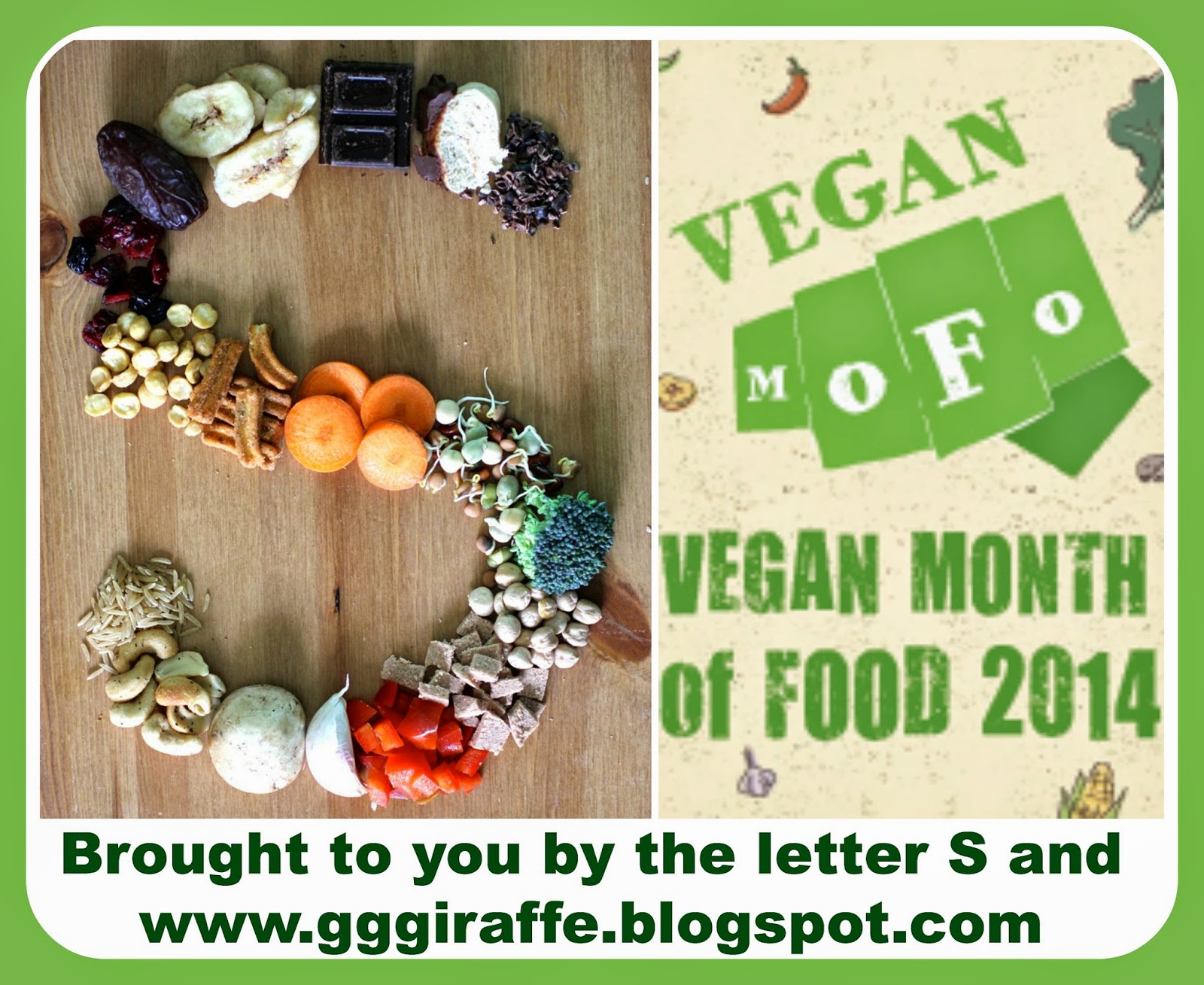 This post is part of Vegan Month of Food September 2014.  This year for Vegan MoFo my theme is The Letter S.  Today is S for ShanDong MaMa.  Go to my Vegan MoFo list for more of my 2014 Vegan MoFo posts.