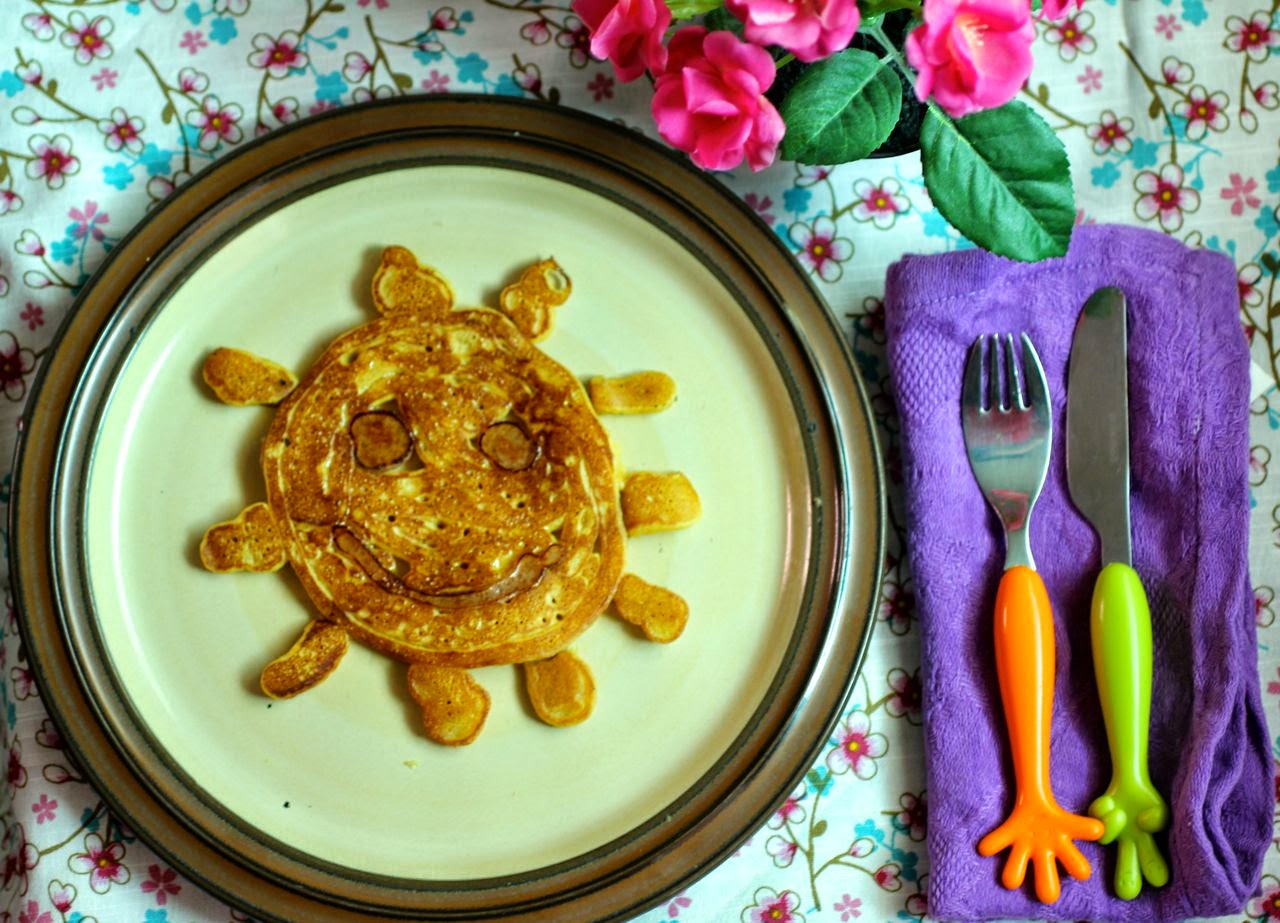 Do you know how hard it is to flip a sunshine shaped pancake!  I used to follow Jim's Pancakes and admire all his miraculous pancake creations - a ferris wheel, a carousel and even a toilet.  It all looked so easy.  So Sylvia and I made pancakes on a weekend, loaded up our squeezy bottles and created chaos in the kitchen. 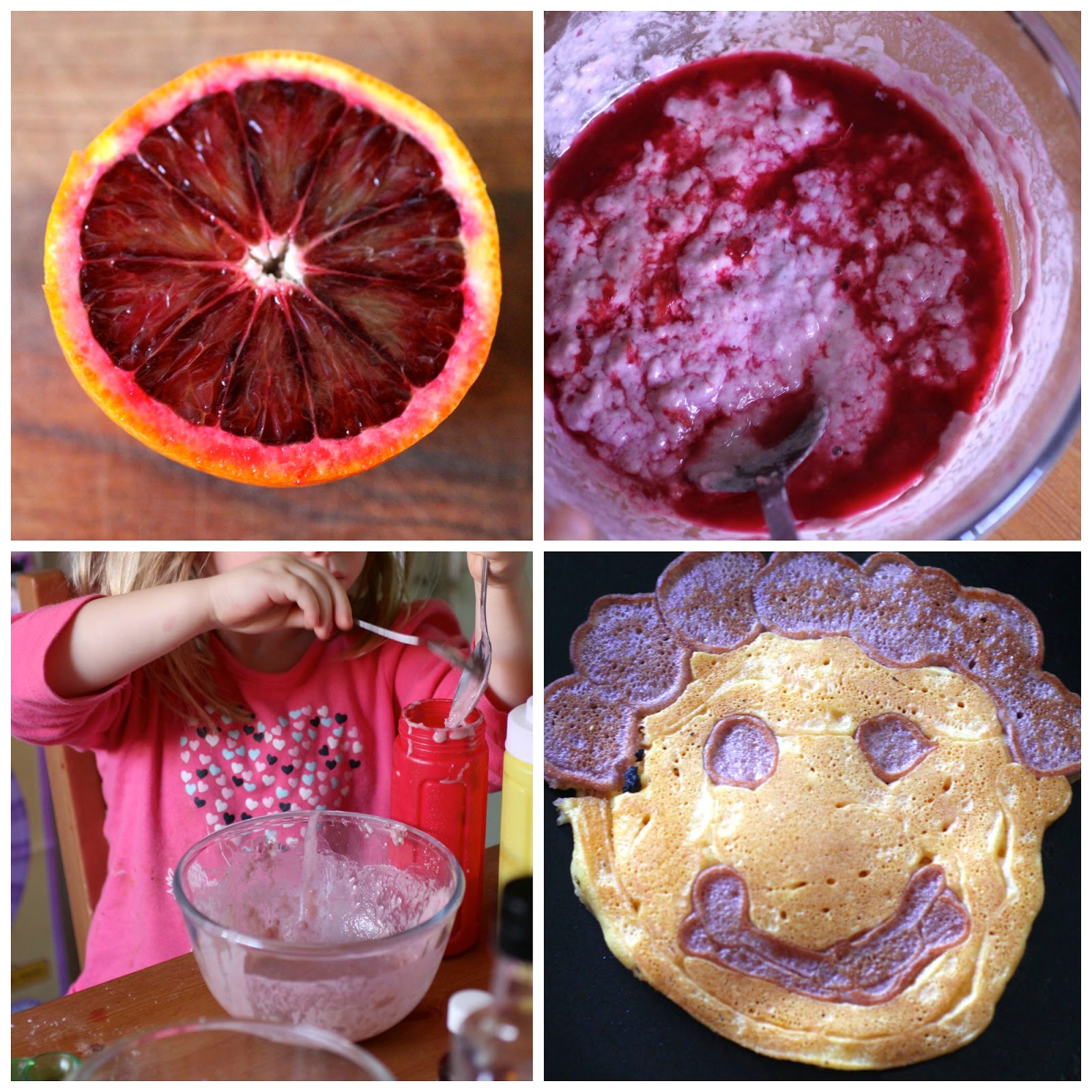 We wanted squeezy bottle art.  Our usual pancake recipe is too chunky.  Instead we turned to a recipe as used by Veganopoulous.  She says she always makes pancakes using the Vegan Brunch recipe.  When I checked out the recipe, Isa is apologetic about having already published the recipe in Vegan with a Vengeance.  It must be good to republish it.  Like any pancake professional - ha ha - we had two colours.  One coloured with a little turmeric.  Another coloured by blood orange juice. 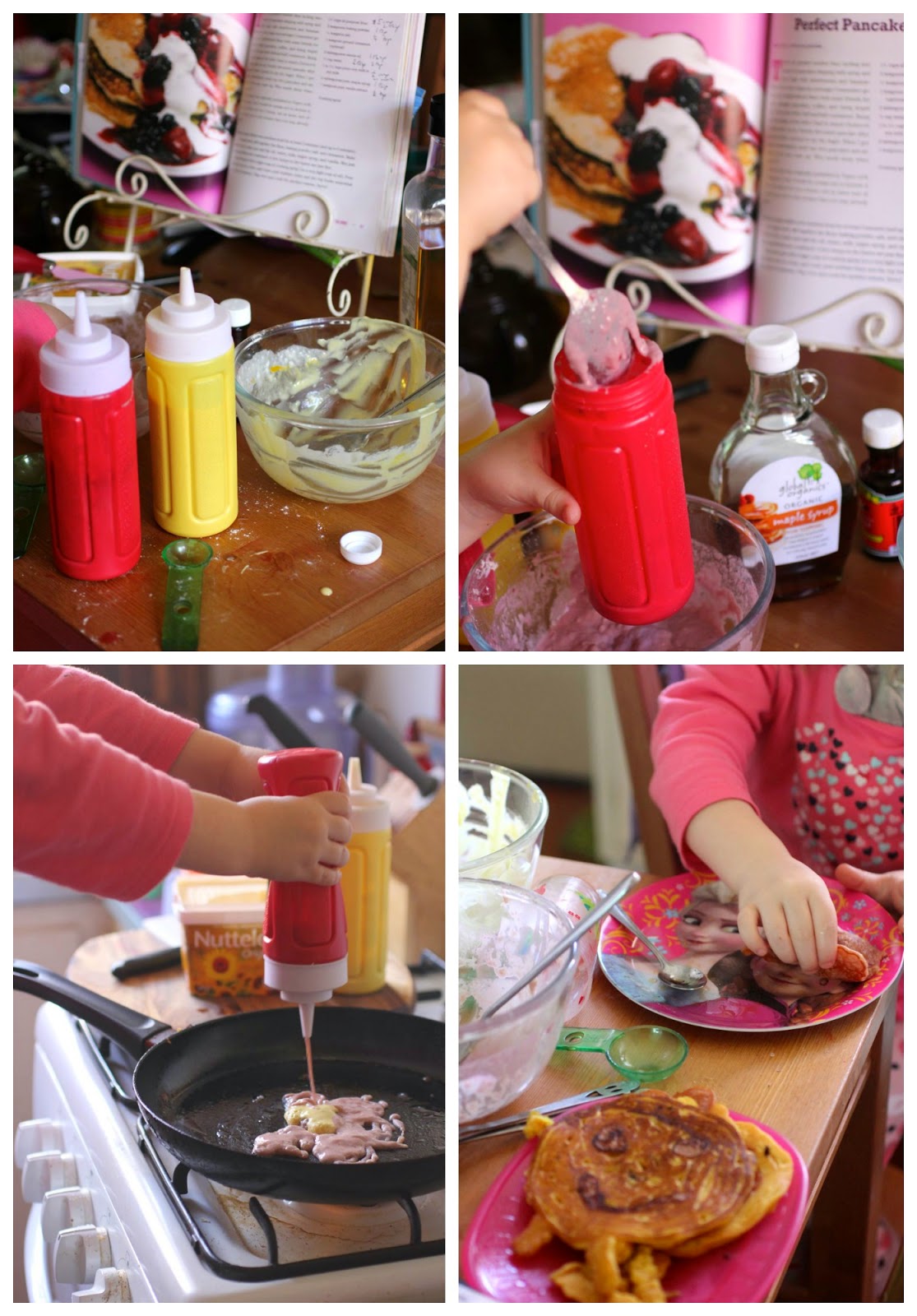 Squeezy bottle amateurish chaos followed.  We made a sun - most of the rays fell off but were stuck back on for the photo; a flower and of course Dolly - who looks like she belongs in a horror film. 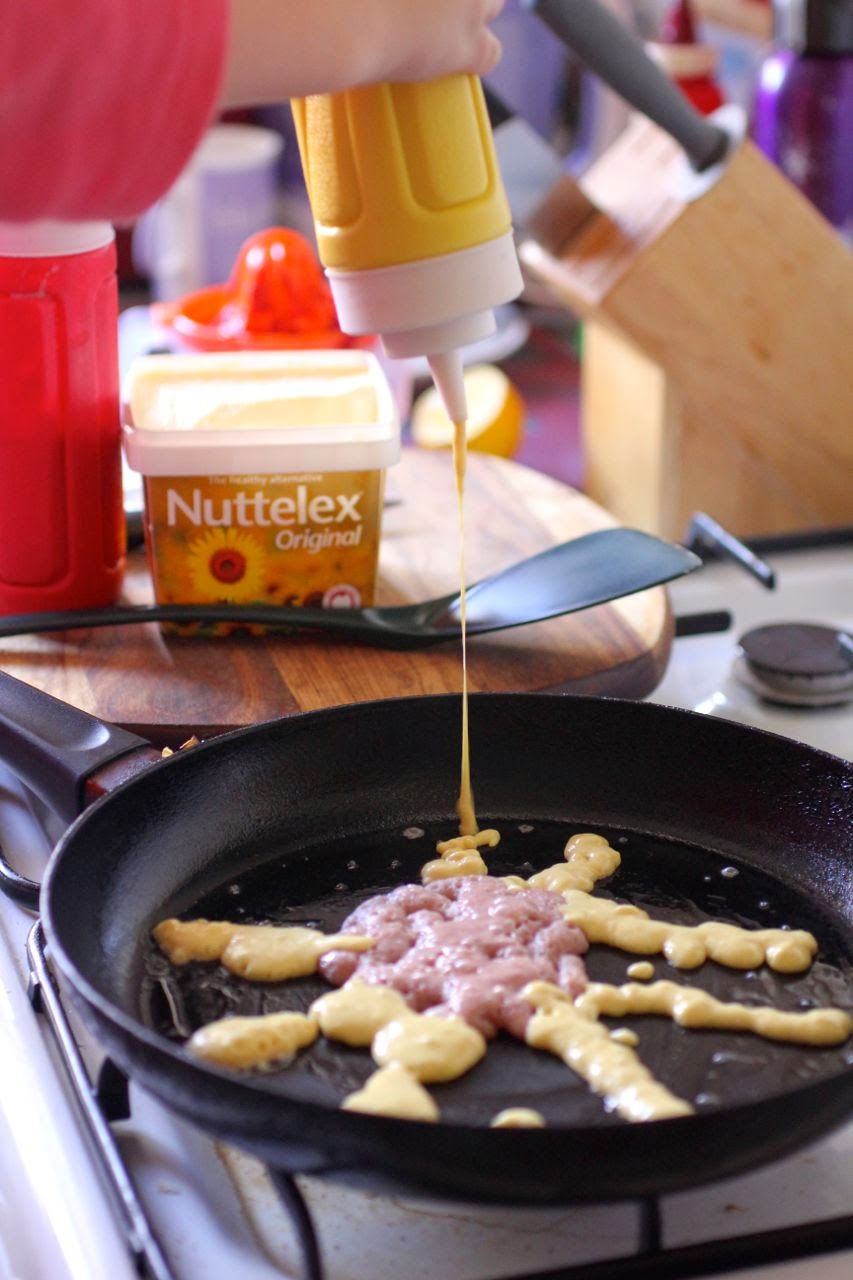 Sylvia loved driving the squeezy bottles.  She loved the whole pancake making.  It was possibly the first time she has flipped pancakes herself.  She burnt herself on a frypan while trying to flip a while back so her childlike confidence has a touch of caution.  She was very proud of herself.  I just wonder how long until she can make me breakfast. 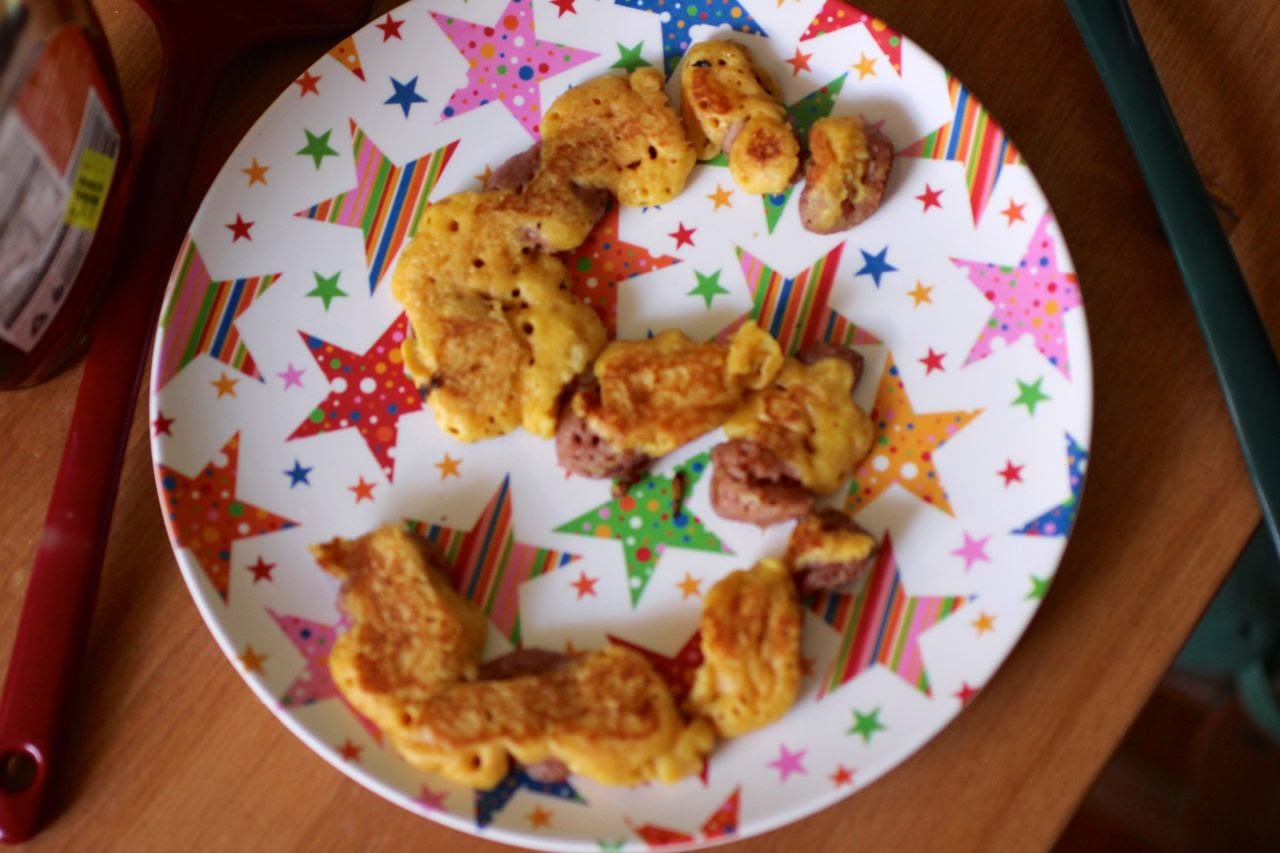 And finally because I have this silly theme of The Letter S for Vegan MoFo, we made an S - which fell apart in the frypan!  The S might not be sensational but the pancakes were.  I have tried a few vegan pancakes and found them too soft in the middle.  These pancakes were brilliant and could become my go-to vegan pancakes.  Especially when we want a bit of squeezy bottle fun. 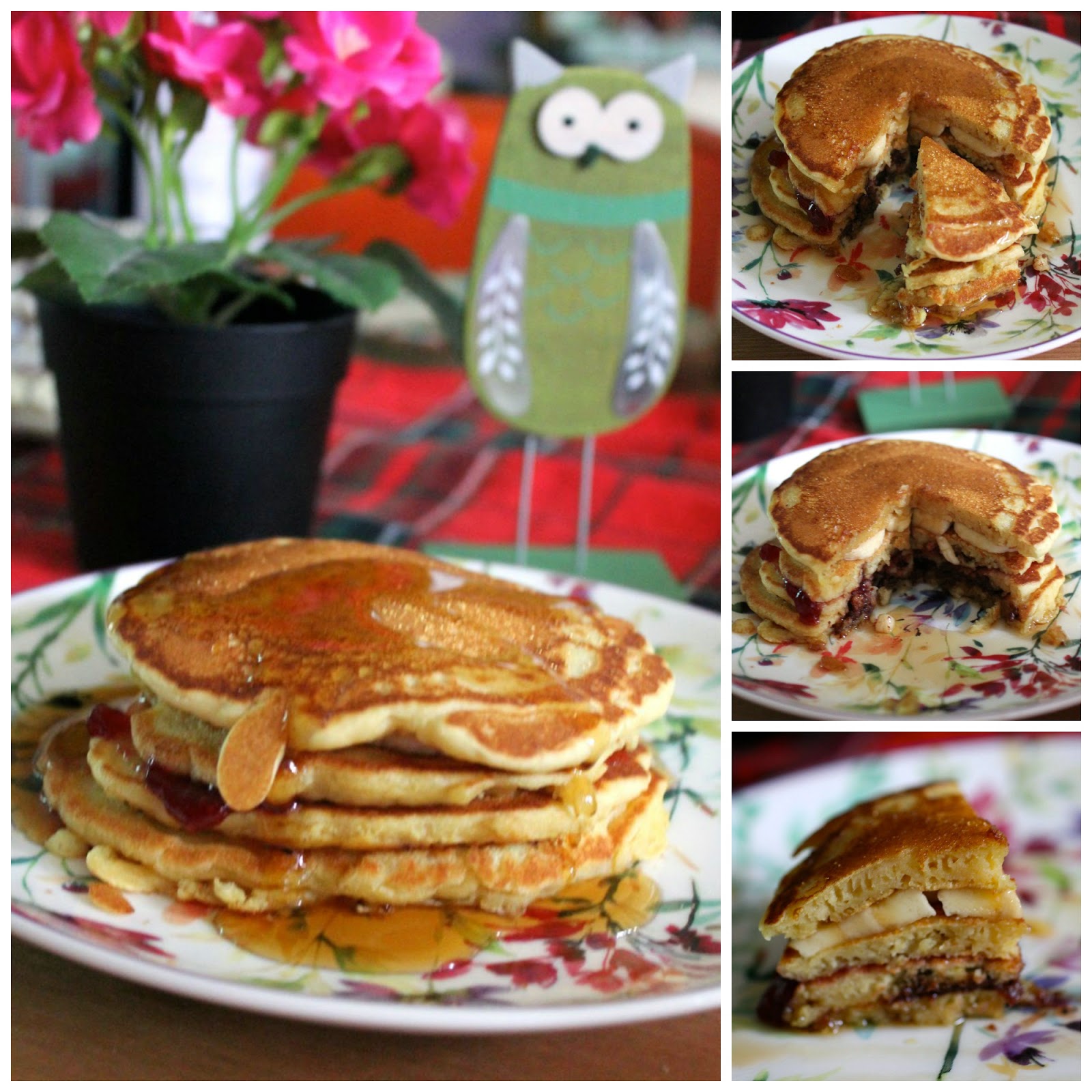 We loved these so much we have already made them again and this time the pancakes were not quite so coloured but we made the layers a bit fancy.

One of my favourite blog events is We Should Cocoa run by Choclette of Chocolate Log Blog.  Each month bloggers share recipes featuring chocolate.  This month the event is 4 years old and the theme is Jam.  So we made a celebratory pancakes stack sandwiched together with layers of choc chips, jam and banana slices, all drizzled with maple syrup.  So simple and so yummy.

We always have pancakes for breakfast but when I was young we always had them for dessert so I am also sending the pancakes to Elizabeth's Kitchen Diary for Dead Easy Desserts (overseen by Maison Cupcake and Feeding Boys.).

Mix together all the ingredients in a medium bowl.  Heat heavy bottomed non-stick frypan over medium high heat.  Rub some butter over the frypan (it should be hot enough that it melts right away).  Spoon pancake mixture into the pan to make small pancakes, use 1/4 cup measures for medium pancakes, or use a squeezy bottle to draw shapes.  Fry until a few bubbles appear and flip over.  Cook about another minute or until golden brown.  Eat hot.

*NOTES: I halved Isa's recipe because we wanted two colours.  I doubled the maple syrup as I was concerned there was a slight spicy taste from the turmeric.  To make the purple pink colour we added juice of blood oranges (about 2) instead of water and milk and didn't use the turmeric.

On the Stereo:
The Trip: Various Artists: curated by Jarvis Cocker and Steve Mackey.

This post is part of Vegan Month of Food September 2014.  This year for Vegan MoFo my theme is The Letter S.  Today is S for Sticky Thursdays.  Go to my Vegan MoFo list for more of my 2014 Vegan MoFo posts.