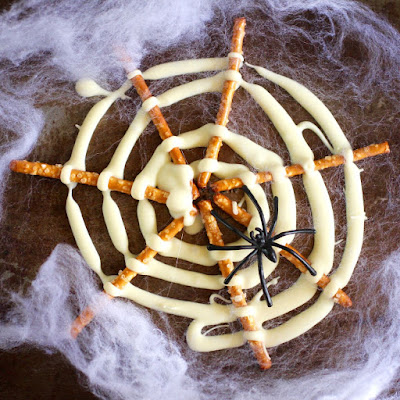 Before eating our Halloween bat toast and tricken soup, we made chocolate and pretzel spiderwebs.  Like the bat toast these were more a gift of serendipity than result of any planning.  I had most of the goodies in the cupboard and didn't know what to do with the white chocolate.  (Sometimes planning can go awry.)

All I needed was the liquorice for the spider legs.  This liquorice in turn happened to be useful for another spidery halloween treat that I will share soon. 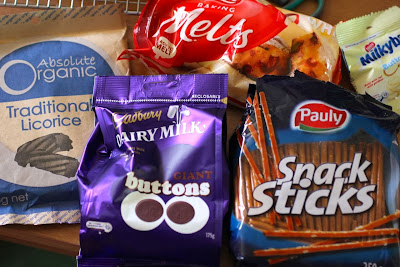 I had promised Sylvia we would make the spiders webs as a treat.  When I came to making them she was dismissive.  After all the television was on.  I stood puzzling over how much room I needed for these long pretzel sticks (maybe they should have been broken in half).  Three seemed to take up half the table.  Then Sylvia saw all the fun foods I was playing with.  The telly was turned off.  In seconds she was by my side to help out. 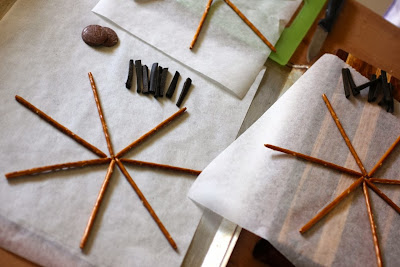 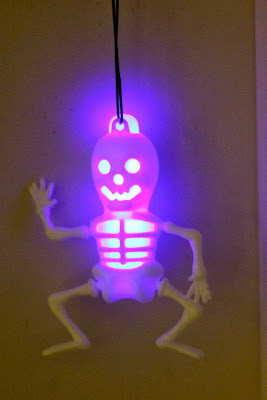 Ours weren't brilliant but - like this glowing skeleton that E bought Sylvia - they were fun.  I did the spider bodies first which meant I couldn't put the web in the centre.  And you might notice I don't have a steady hand when it comes to piping lines.  They didn't take too long to set and I could stack them in a corner while we ate dinner.  Thicker webs might have been good because ours were quite fragile.  While not perfect, they were delicious and fun.  Which is all that matters, after all.

Update October 2015: I made these again but without the spider which was too fiddly.  I had better success in piping the webs in chocolate with some of them - still a few were a bit wobbly.  I set a few in the fridge for 10-15 minutes and then found out of the fridge they went soft again.  Perhaps I was being too impatient.  I have also updated the post with a new photo at the top!
Posted by Johanna GGG at 13:19