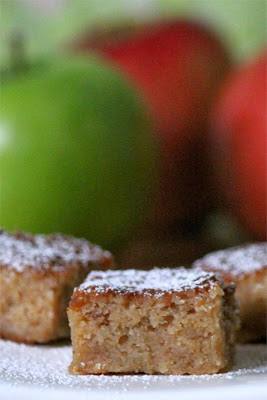 On the morning of Melbourne Cup I woke and knew exactly what I would make.  I had lots of leftover buttercream in my fridge and had been toying with making apple or carrot cupcakes with caramel icing.  It is funny how some recipes stick in my mind.  Once I thought apples, I decided the buttercream could wait and I must use up some white chocolate in the Apple and White Chocolate Blondies that Lucy posted on The Kitchen Maid almost two years ago. 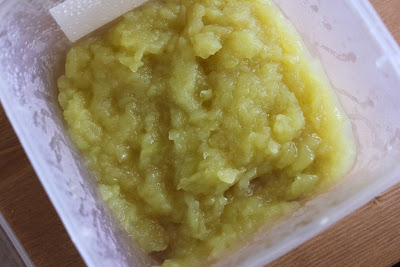 My planning seemed all out of kilter.  Once started I realised I had to stew and cool apples before I could even start to bake.  Then midway it occured to me that blondies aren't usually at their best when fresh.  Even so I was so far in I couldn't stop.  I wasn't deterred by my lack of the good quality white chocolate specified in Lucy's recipe, nor that I didn't have quite enough butter. 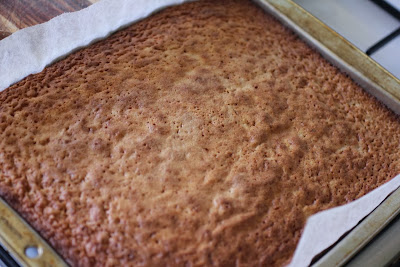 I made changes to please my people.  I used brown sugar to make the blondies more caramelly and omitted the cranberries so there were no complaints about bits.  I reduced the cinnamon and still found it quite strong but not terribly so.  I got it right with the apples. having just enough to make 250g with a mouthful over for Sylvia. 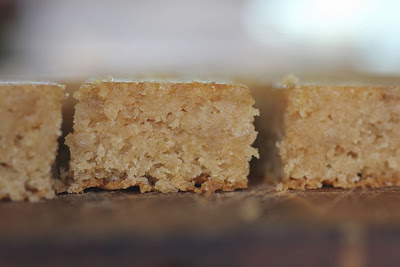 It was one of those crazy mornings.  You know.  The one where you are beating together eggs and sugar and the four year old asks for a peg to attach a shade cloth over her dolly who is being pushed around in a trolley that has been turned into a stroller.  The one where you should be getting reading to go out and you decide you will just have time to mop the kitchen floor and then give the bathroom a quick going over.  The one where when you finally head out to the bbq and that sneaky short cut has disappeared and you find yourself walking the long route. 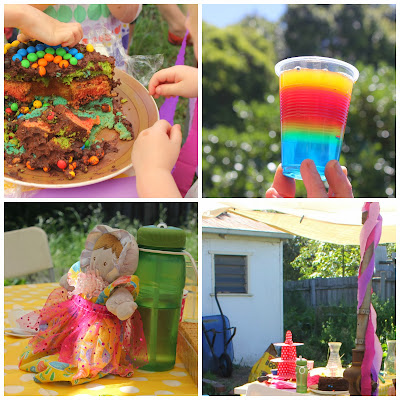 We got there.  It was a little girl's birthday.  We didn't win any sweepstakes but we enjoyed relaxing on a sunny afternoon when everyone was on holiday because there was a horse race on at 3pm for about 15 minutes.  We ate sausages in bread, lots of amazing salads and ice cream wafer sandwiches.  Sylvia mixed her jelly to slush and drank it.  Everyone enjoyed the blondies. 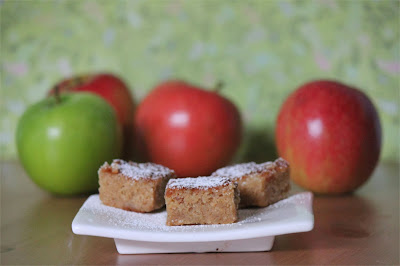 Yes the blondies were great.  I knew they were good when E said he could eat them by the truckload and Sylvia told me she wanted to gobble them all up.  That was when they were fresh and warm from the oven.  Then they cooled and were like cake.  I thought the title a misnomer.  Fortunately we still had some at home that on day 3 suddenly became dense and fudgy and amazing.

I am sending these blondies to Jac at Tinned Tomatoes for Bookmarked Recipes.

Apple and White Chocolate Blondies
Adapted from The Kitchen Maid

Peel. quarter, core and thinly slice apples.  Place in small to medium saucepan with a splash or two of water and cook over low heat until apples are mushy.  (I didn't time this - it is not too long - perhaps 20 minutes - so stir occasionally and keep an eye on them.)

Melt butter and white chocolate in large heatproof bowl in the microwave (or over the stovetop).  Beat together the eggs and sugar until creamy.  Add the white chocolate mixture and beat in.  Stir in the apple and then the flour, baking powder, cinnamon and salt until mixed.  Pour into a greased and lined cake tin (I used a swiss roll tin but I think a smaller slice tin might work ok as mine were rather small).

Bake at 180 C for about 25 to 35 minutes until golden brown and coming away from the sides.  They will still be very soft in the middle.  Rest for about 30 minutes before carefully turning out of tin to cool on a wire rack.  Best eaten warm from oven or after about day 2 or 3.  Patience will be rewarded!

On the stereo:
The Singles: Suede
Posted by Johanna GGG at 14:35