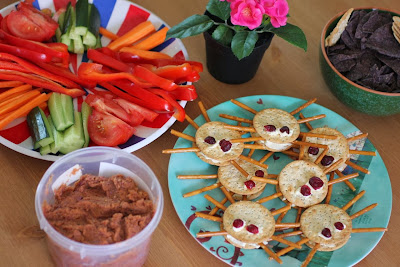 Each year I invited my family over to remember Alex and Ian's birthday with us.  This year, we didn't have many over so I decided to make spider crackers, pizza and salad.  As always I have so many ideas that my menu shifts and changes in the days leading up to the lunch.  By the time my parents and my brother Paul arrived, lunch had slightly changed to being spider crackers, cauliflower bean dip and pizza. 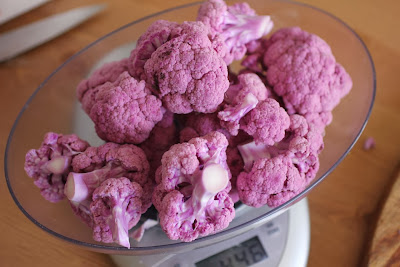 I actually had a notion to make a cauliflower dip with purple cauliflower for the bat toast.  I had thought it would make a spooky evening sky for the bats to be flying over.  I even got as far as roasting the cauliflower.  Then I decided the bats would show better against the hummus.  I still wanted to make the dip. Dip and vegies is so much easier for me than a salad so it became part of the lunch. 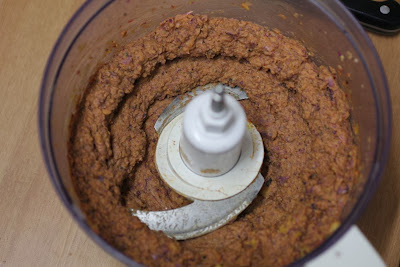 As well as wanted a purple dip, I thought it would be a good opportunity to open the bottle of Frank's hot sauce I bought months ago.  It made the dip very spicy.  I am not sure if the dip would have been more purple without the sauce.  Whichever it was, I was glad I hadn't counted on a purple dip for my bat toast.

I was also glad I had not put the full three quarters of a cup of hot sauce, as called for in many recipes.  A quarter cup was quite spicy enough for me.  I have read that Frank's hot sauce is the excellent base for buffalo dips.  I am still unsure about what buffalo flavour is.  I guess I need to follow a recipe to the letter.  (Not my style!) 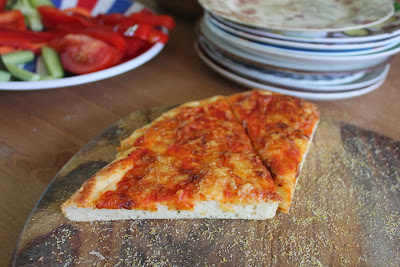 Having dip and vegies was good to nibble on while the pizza baked.  Paul rang to say he would be a little late but he need not have worried.  The pizza wasn't ready til after he arrived.  It was a simple affair of tomato sauce and cheese.  We cut it up into slices and handed it around. 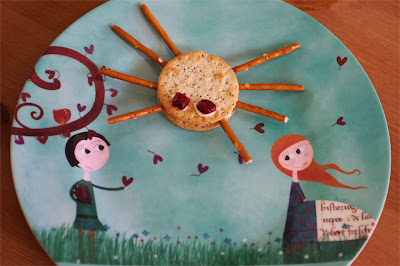 Not as tasty as the pizza but more fun were the cracker spiders.  These were a Pinterest inspiration.  They were simple to put together but would be time consuming to make a lot.  My pretzel sticks were so long that I broke them in half and the legs still seemed quite long.  I think it would be fun to make these with flavoured cream cheese or another dip, if children weren't involved.  They were lovely about an hour after being made.  When I tried a leftover one at tea time they were a bit soft.  Defintely one to eat soon after making.

After dip, pizza and crackers we had cupcakes.  Then my mum bustled off to buy food for a dinner party she was holding the next day (after doing our dishes which was much appreciated).  I went for a walk to the park with dad, Paul and Sylvia to watch the trains and play hide and seek in the welcome shade of the trees.

Toss the cauliflower florets in a drizzle of oil and good pinch of French lavender salt.roast.  Chop the head off the garlic bulb to expose the ends of the cloves.  Make a little bag of foil and when garlic in in there, drizzle oil over the cut end of the bulb.  Twist the ends of the foil to seal in the garlic bulb.  Roast until the cauliflower is cooked and the garlic is soft.  (I think I did mine at 220 C for about 45 to 60 minutes but I think the garlic needed a little less time.)  Cool.

Squeeze the garlic bulbs out of their skins.  Toss into a food processor with roasted cauliflower florets.  Add other ingredients and blend until you have a smooth and spreadable dip.  Check seasoning and keep in the fridge.

On the Stereo:
Son of Evil Reindeer: Reindeer Selection
Posted by Johanna GGG at 08:03