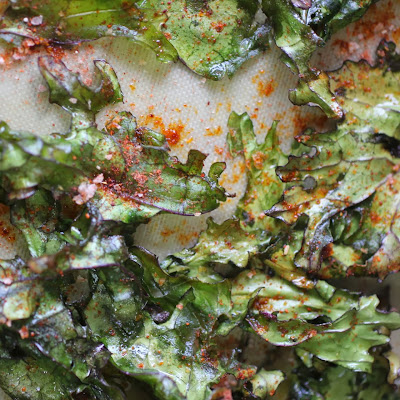 Yesterday I wished I lived in the USA and was looking forward to celebrating Thanksgiving.  It has never happened before.  I blame the weather.  It is mid-November.  Almost Summer.  We had a high of 16 C.  I was freezing.  It should be a warm spring day of ice creams and cool drinks and salads.  Instead I was dreaming of being cozy indoors and having festive dinners on the other side of the world where it is almost winter.  Perhaps it was this odd out-of-season experience that made me finally try kale chips. 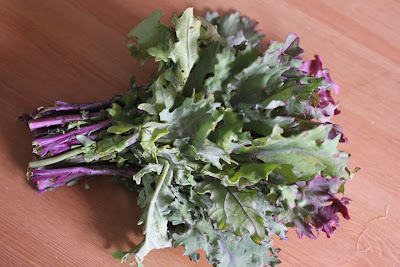 Or maybe it was this gorgeous bunch of kale that I bought at the Coburg Farmers Market.  I love the purple stems and tips of leaves.  I used some in a bad adaption of an interesting recipe.  The rest were still awaiting their purpose in life.  I searched and remembered I still hadn't tried kale chips. 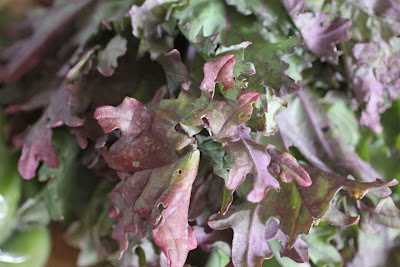 Kale chips are one of those recipes that you can find on any blog.  It seems every other blogger has already tried them.  I was comforted by the post by Gluten Free Girl about kale chips because in 2010 she felt she was finally catching up in making kale chips.  It took me until 2013.  She refused to follow the crowd.  I was just intimidated by baking the chips to the right texture.  In my shonky oven.  And I get confused about which type of kale to use.  (I am not even sure how to label the bunch I used.) 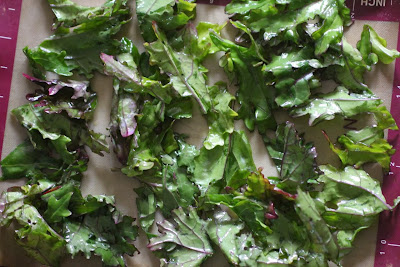 Happily, the kale chips worked.  Mostly.  I didn't quite manage to get them all crisp.  I used two trays and despite turning the trays halfway through, one side cooked better than the other.  I made too much seasoning.  That was ok.  Otherwise it was fairly simple.  The hardest part was cutting the woody stems off the kale and washing and drying the kale. 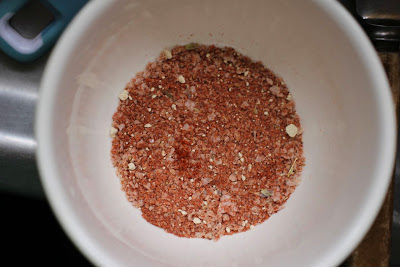 Most of my energy was spent on making dodgy tofu bacon with recycled marinade and making a mess of tahini lime rice which I had started chopping vegies and remembered I should have cooked rice not dried rice.  I then cooked the rice using the method from a chickpea pilaf.  I also used edamame instead of kale.  I added purple carrots and the rice was an amazing colour.  But I really tell you because with the sides, the kale chips made a pleasing bowl of dinner. 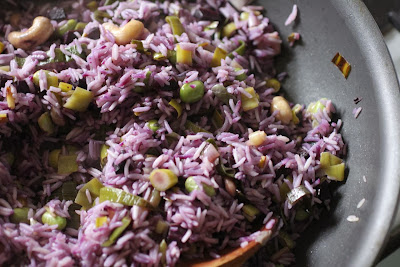 The kale chips were very good.  Far better than the packaged kale chips I have tried. I didn't feel like I was eating potato crisps as Gluten Free Girls did.  Perhaps I could have a bit of experimenting with baking them in my oven to get the timing right.  And of course there are lots of different flavours to try.  Nutritional yeast flakes will be there, as will be salt and vinegar.  If you have a favourite flavour, please share in the comments. 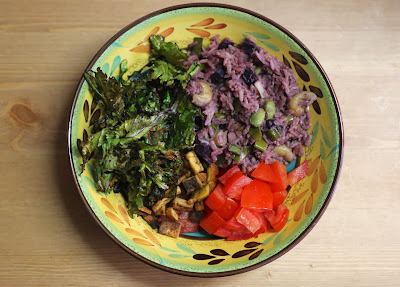 What really surprised me was how much E and Sylvia loved them.  E is not usually a kale fan.  In fact he has been known to remind me that kale rhymes with epic fail.  Sylvia is wary of new foods.  I gave her a little to taste and she asked for more.  She had her limits but she ate an impressive amount.  Any recipe that convinces a 4 year old to eat kale deserves to be repeated. 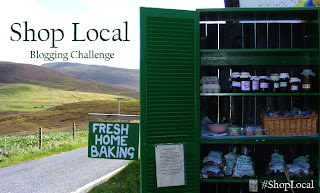 As I bought the kale at our local farmers market, I am sending these kale chips to Elizabeth's Kitchen Diaries for Shop Local #3, a blogging challenge that she has recently started.  It is to showcase food we have sourced locally.

Trim woody stalks off kale.  Wash kale well and then dry it until it is bone dry.  If you have a salad spinner you could spin and use a tea towel to pat dry.  I don't have a salad spinner so I used two tea towels because the first got too wet and I did a lot of patting and folding up in the tea towel.

Once kale is dry transfer to a bowl and massage olive oil into the leaves using your hands.

Spread out in one layer on one or two lined baking trays (depending on the size of them) and bake in the oven for about 12 minutes or until leaves are crisp but not brown (which means bitter).

While kale is baking, mix remaining ingredients to make the seasoning.  Sprinkle baked kale with seasoning.

On the Stereo:
Folk Songs of Britain: Vol 10: The Life of Animals: Various Artists
Posted by Johanna GGG at 15:53