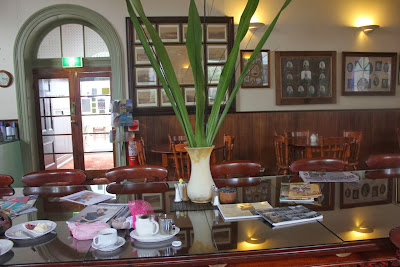 I always enjoy driving through Winchelsea, not just for the sentimental associations, but also because it is a great little historic town.  Its main claim to infamy is Barwon Park where rabbits were first introduced to Australia.  But it is much more than that.

As a major crossing over the Barwon River, it was settled in the mid Nineteenth Century.  It retains some fine historic infrastructure including the Barwon Hotel, the old bluestone bridge, the school, the former library and the old shire hall.  The last is now a fine tea rooms, where we stopped on the way back from Port Fairy. 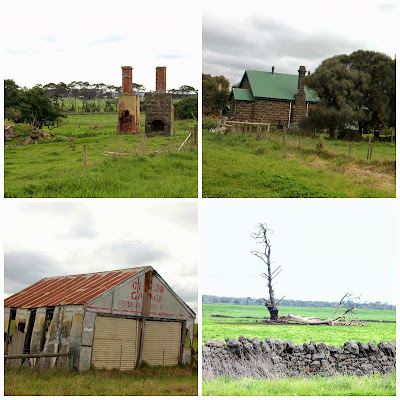 Before telling you about the tearooms, let me share a few photos of our trip home along the Princes Highway.  I love all the old buildings but most of all I love what I grew up calling the Stony Rises.  E (being Scottish) calls them drystane dykes.  We used to visit family in the Western District and my mum would talk to us about the Stony Rises as we drove.  Sadly I took the photo on the wrong setting on the camera but I still wanted to share it. 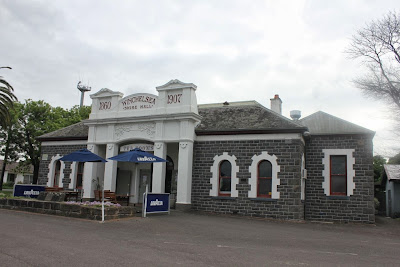 We had any early lunch before leaving Port Fairy and decided to stop at Winchelsea for afternoon tea.  I have not been in this space since it became a tea room.  Once upon a time this was the hub of Winchelsea Shire which took in outlying towns such as Deans Marsh and Lorne before local council conglomerates were formed and small shires were no longer needed. 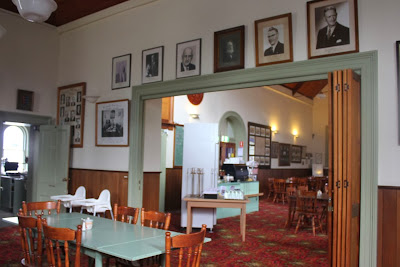 Windchelsea is now under the juridsiction of The Surf Coast Shire.  The story of the old shire is still present in this building in the photos of the councils, the grand solid table (top photo) and the architectural details. 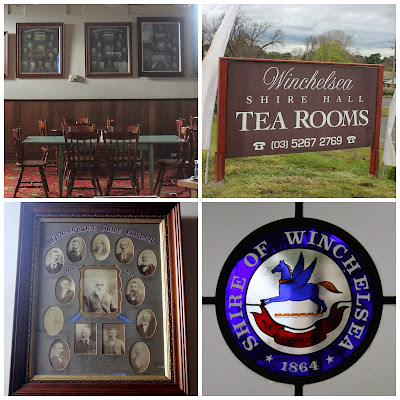 The tearoom was empty when we arrived but quite a few people came and went while we were there.  I was pleased to be able to sit at the lovely antique table that I imagine might have been the scene of many council meetings.  If only it could talk.

We were ready for refreshments and headed to the fridge to check out the cakes.  I decided on the scones.  E and Sylvia both decided on the last piece of jelly slice.  They agreed to share it. 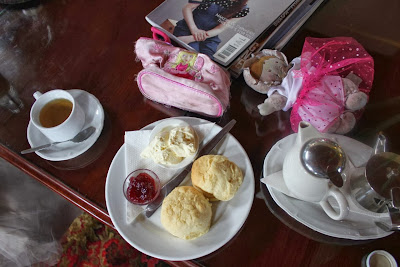 The scones were warm and fluffy.  They were fantastic.  I had a pot of peppermint tea with it.  Proper loose leaf tea.  In fact this type of afternoon requires a large table.  The jelly slice was rather nice too, if I remember rightly though I think I made the right choice.

As for savoury food, I didn't look much at the lunch menu.  The specials menu had a interesting sounding sweet potato and pear soup, but I am not sure what else was there for vegetarians - possibly a focaccia or pie. 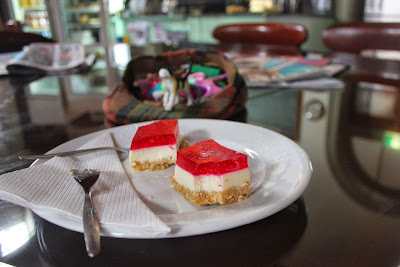 As well as enjoying our afternoon tea, I loved being able to wander about the building and peruse the old maps, photos of former councillors and other historical documents that tell the story of Winchelsea.  There was plenty of space for Sylvia to dance and swirl and bounce. 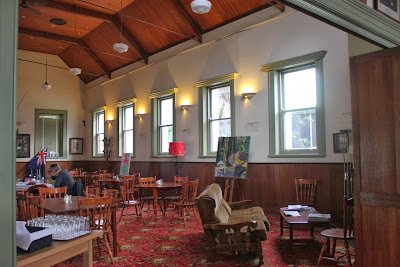 Part of me is a little sad that the Winchelsea Shire Hall is no longer a community space but I am glad it has been kept open to the community as tea rooms.  It adds a touch of class to a town that boasts its market has "utes, ferrets and country music".  The building has been sympathetically treated and retains a fine sense of the town's history.