Arepas, a weekend and random links 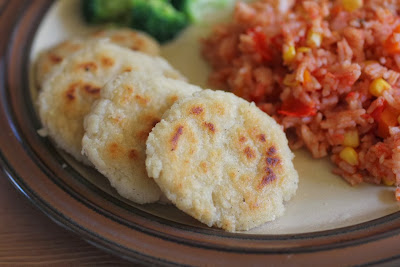 .
A large bag of masa lista has sat on my bench for simply ages.  It is the first time I have purchased it.  I tried tamales.  They weren't quite right.  I didn't feel any love for that giant bag of flour.  Yet it is taking up valuable real estate.  So it is a relief to find an easy recipe using the masa lista.  I followed Janet's example and made these excellent Arepas recently. 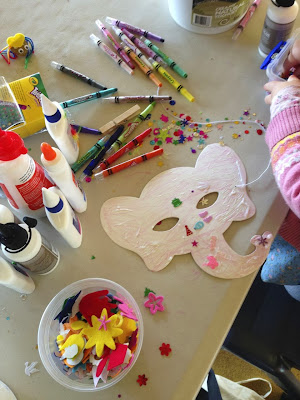 I made them two Saturdays ago after I finally had a Saturday free to go to Coburg Farmers Market again after a busy October.  We bought lots of nice fruit and vegies and lots of interesting foods.  After we had filled our recyclable bags, I noticed a table of pens and glue and sequins.  Craft!  We went over and Sylvia made an elephant mask.  I was sorry to hear this was the last week of the craft table. 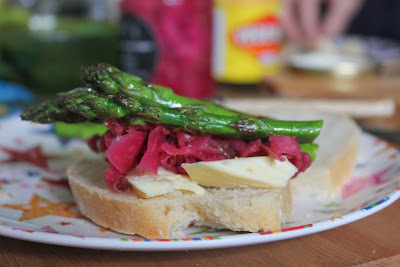 We went home and had a lovely farmers market lunch.  Pan-fried asparagus, fermented beetroot and Milawa white cheese on homemade sourdough bread.  You might have expected that I would have used all the fresh produce for dinner.  Um...no.  I had leftover Mexican rice in the fridge and little energy for fancy food.  It was a great opportunity to try out some arepas. 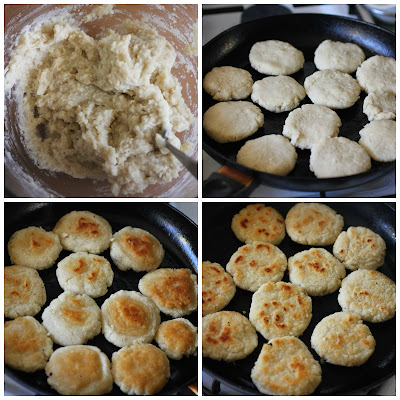 Arepas are embarrassingly easy.  You would think I might have tried them before.  Given that I have that huge bag of masa lista (which I hear is quite like masa harina).  It was just a matter of mixing masa lista with water and salt, shaping into patties and frying.  I skipped the part where Janet cooked hers in the oven at the end.  I decided it wasn't worth it in my slow oven.  I am unsure if this makes a huge difference. 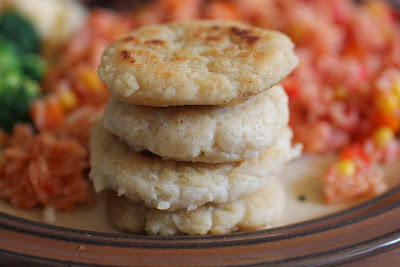 The arepas were delicious.  Crisp on the outside and soft inside, they reminded me a little of Scottish potato scones that we make from time to time.  E and I loved them.  They were great with Mexican rice, tofu bacon, diced cheese and steamed broccoli.  Sylvia initially enjoyed them and then decided she only liked the crisp outsides and not the soft insides. 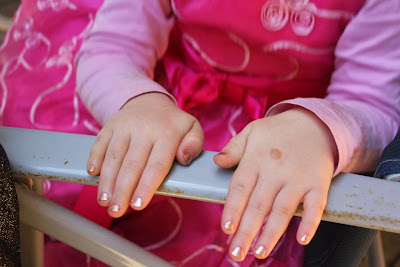 It was just as well I didn't spend too much energy on dinner.  We had a terrible night with Sylvia's favourite Dolly missing.  It took us until the next evening to find her hiding in a box.  On Sunday we to visit my family in Geelong for my brother's birthday.  Sylvia was delighted with her golden nail polish applied by my sister Fran.

We still had leftover Mexican rice when we got home and I took the opportunity to try my hand at tortillas with the masa lista.  It wasn't quite so straight forward.  I am still experimenting with corn tortillas and once I am happy with them I will share more.  Meanwhile, it is good to know I can make these arepas with ease.  I will make my way through the masa lista!

I am sharing these arepas in Ricki Heller's Wellness Weekends.  And now for something totally off topic, I have some Random Quicklinks to share:

Mix masa harina, salt and boiling water until you have a soft dough that feels like playdough.  Leave for 5 to 10 minutes (to make it easier to shape).

Dampen hands and roll handfuls about the size of a golf ball into balls and flatten gently into discs (or arepas).  (I think my hands might have got a little less sticky if I had kept them damp.)

Heat heavy bottomed non-stick frypan over medium high heat.  Pour in about 1-2 tbsp of oil.  Place arepas in the pan and fry for about 8 minutes or until a light golden brown.  Fry another 4 to 5 minutes on the other side or until golden brown.  Serve warm.  Best eaten soon after cooking.

On the Stereo:
Fin de Siecle - The Divine Comedy
Posted by Johanna GGG at 22:40