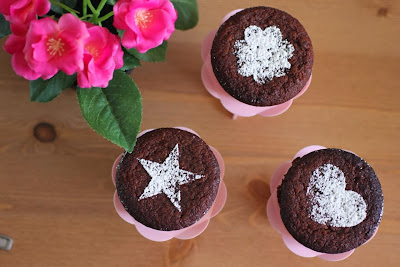 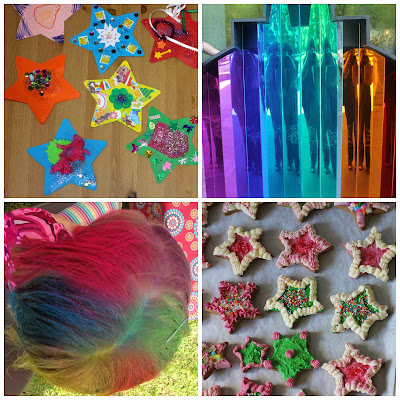 It really does feel like the end of year has hit us with a Bam!  We have had a few fetes.  The first was at Kerriemuir Primary School in Box Hill where E performed with the ukelele group.  Sylvia was excited by the hair spray, nail painting and snow cones but not so keen on the animal nursery and bouncy castle.  I was disappointed the cake stall was sold out but made do with very good strawberry jam.  Sylvia's disappointment was that the band playing a Beatles song was not actually the Beatles.  Even worse I had to break it to her that the Beatles had split up some years ago. 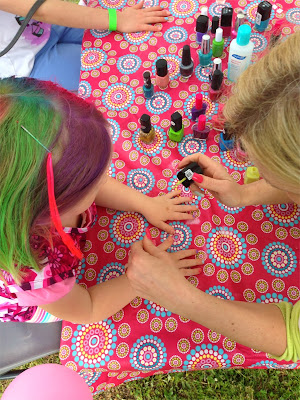 Then last weekend we had Sylvia's kinder fun day.  I really like all the craft activities set up for the kids.  E sat at the trash and treasure stall for a while.  Sylvia ran around with her friends, all with face paint on and big smiles.  She had a short go at the bouncy castle but once the novelty wore off she preferred their little play equipment in their yard. 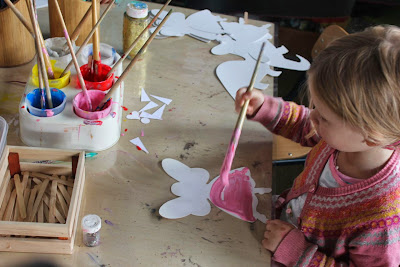 A few days before the fun day, my friend Yaz visited and we spent some companionable time together baking and decorating gingerbread stars.  Yaz impressed me with his piping skills that made sure we used up the buttercream.  Sylvia loved them and spent many happy hours counting her coins she was going to use to buy some stars for her and her friends.  Actually there were about two or three other sets of gingerbread stars at the fun day cake stall.  Who knew it was such a popular idea.  Most of my stars were sold and so was the loaf of sourdough bread I took along. 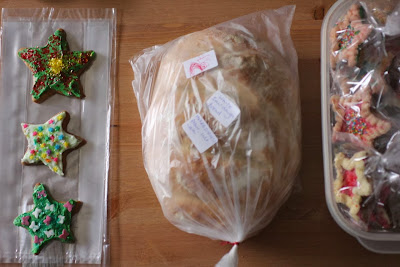 I really appreciated that our fun day had vegetarian sausages and some tomato and cheese pizza as well as salad and fruit salad.  Though my favourite food was the amazing brownies that I was quite smitten with.  I also admired the person who made great labels for gingerbread stars and cheese biscuits with string and handwritten list of ingredients.  Packaging is always a challenge for me.

I had a surprise when they announced the prizes.  I won a kitchen pack (below) in the silent auction.  (That is the one where you write down a price on a piece of paper and the next person can write a higher price and on and on until the auction closes.)  Our cutlery drawer is overflowing so I am a bit overwhelmed at a cutlery set but I love a few new cookbooks, a silicone piping set, new measuring cups and spoons, an oil and vinegar set, a keep cup and some notecards. 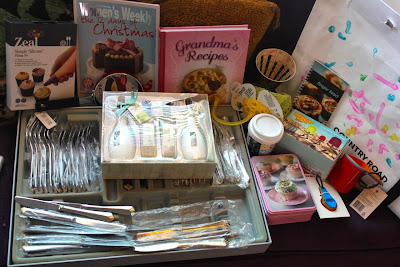 It makes me a little sad that Sylvia only has about a month left of kinder.  However it is exciting that she will start school next year.  We have had three orientation mornings and she now has her uniform and school bag.  (Yes I hear your cries of "surely she is not already old enough for school!")  You can see her red school hat below.  We have also been doing some practice lunchboxes at her kinder (which usually caters her lunches).  It is sushi tomorrow! 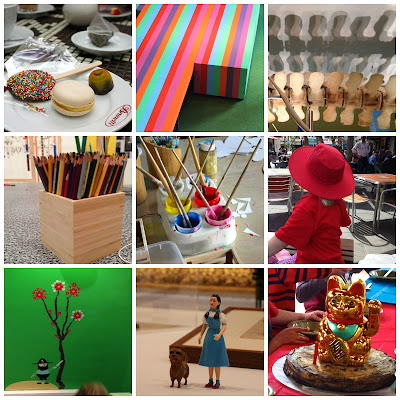 In the above photo is (clockwise from topleft) is 1) afternoon tea with my parents at Brunetti after the fun day; 2) the stage at the National Gallery of Victoria where we saw The Choir of Hard Knocks play; 3) a whale bone at Melbourne Museum where we met my friend Amy and kids recently when it seemed a bit hot for the park; 4) Sylvia after school orientation; 5) a cat cake for a cat loving little boy (he wants to be known as Ginger) at his birthday party; 6) Dorothy and Toto in Patrick Pound's The Gallery of Air installation at the gallery when I visited with my mum before the Night Noodle Market; 7) the Royal Arcade toyshop where I wish I could do all my kiddie Christmas shopping - we visited on a trip to see some Christmas decorations in the city 8) craft at the gallery as part of Melbourne Now; and in the middle 9) paint at the kinder fun day.

I haven't even mentioned that I finally got out to see a movie at the cinema this week - Enough Said with Julia Louis-Dreyfus and James Gandolfini.  Great movie that felt quite real and provided an interesting exploration of relationships.  I have also been visiting some impressive cafes so I might write about some soon.  And for those of you who are also busy and finding the housework is taking a back row seat, you might find some comfort in this Smitten Kitchen post. 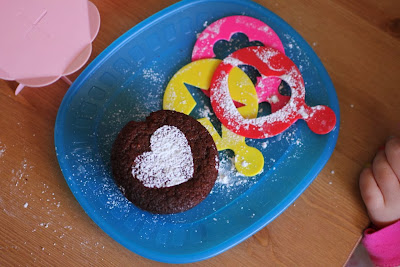 But I was going to tell you about cupcakes.  I made these for my nieces' birthday.  In the past I have made a butterfly, flowers and a dragon.  This year Grace was feeling too mature for such childish cakes and asked for a chocolate cake with icing.  I handed that task to my mum and decided to make some cupcakes. 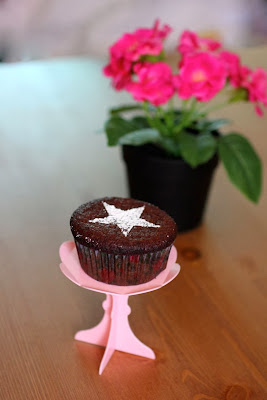 I had planned to make cupcakes that I could decorate with the buttercream icing that was lingering in the fridge.  After I chose the chocolate coconut cupcakes I found that the frosting was actually coconut cream.  I continued to ignore the buttercream and decided on some icing sugar sifted over stencils.  This looked great on the cupcakes I photographed at home but had melted away by the time I got to my mum's for the birthday lunch. 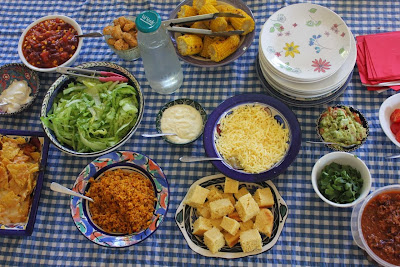 My mum made an amazing Mexican lunch: nachos, tacos, tortillas, corn on the cob, cornbread, guacamole, Mexican rice, tomatoes, chilli non carne, cheese etc etc.  It was very filling but I still made room for dessert.  My mum had made pavlova and chocolate mud cake.  And we had my cupcakes. 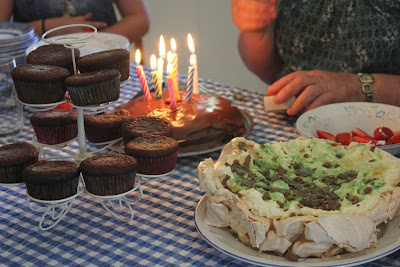 I chose the cupcakes because they were gluten free and only had 2 eggs.  (Not 6 or 8 as is often the way in a GF recipe.)  Of course I love a cupcake with chocolate and with honey rather than sugar.  I made a few changes including increasing the honey and the cocoa because the mixture seemed to need a lift.

I really liked these cupcakes.  Like many GF bakes, they were a bit fragile.  They were chewy on the outside and soft almost pudding-like - on the inside.  I'd like to try them with melted chocolate as well as cocoa and perhaps a little less liquid to make them sturdier.  True to my family's fickle nature, it was not one of the birthday girls but my niece Quin who really took a shine to them.

I haven't been doing lots of bloggable cooking lately (though I still have a blog backlog) but am excited that our stash of this chocolate cake in the freezer is almost finished.  I have been promising myself to wait until it is all eaten before I bake more for us at home.  Life might be busy but there is always time to bake!

Previously on Green Gourmet Giraffe:
One year ago: Dublin cafe: Fallon and Byrne
Two years ago: Two Pizzas - with Facon and with Chocolate
Three years ago: On the way to make burgers I discovered a mash!
Four years ago: Mexican Lasagne and our Jetset Baby
Five years ago: Leftover Cream and Paprikash
Six years ago: Fantastic Falafels

Preheat oven until 180 C and line a 12 hole muffin tin with cupcake papers.

Mix almond meal, coconut, cocoa and bicarb soda in a medium to large mixing bowl.  In a small mixing bowl or large jug, mix together butter and honey until creamy.

Gradually mix in coconut oil, then eggs and finally the coconut milk and vanilla.  (The wet mixture got quite lumpy and I think in future I might find it easier to mix the wet ingredients with the electric beaters but the hand-mixed lumpy mixture ended up mixing ok)

Pour the wet mixture into the dry mixture and mix until combined. Spoon into prepared cupcake papers.  (The cupcake papers were almost full.)

Bake for 20 -30 minutes until browned at the edges and a skewer inserted in the middle comes out clean.  Cool on a wire rack.  Keeps three days in an airtight container.

On the Stereo:
Seargent Pepper's Loneyly Hearts Club - The Beatles